Ten tips to make the most of a restaurant stage

Header: Tom Gatehouse plating dishes at Le Gavroche and with the team at Hof Van Cleve

With just over one week to go before entries close for the 50 Best BBVA Scholarship, we asked journalist and semi-professional stagiaire Tom Gatehouse to share tips from his experiences cooking in top restaurants around Europe.

Ten minutes into my first ever stage, at Simon Rogan’s Fera at Claridges in London, a chef strode up to me and said, sternly: “Your button is undone.” But before I could even go for my trousers, she reached up, fixed the top button of my chef whites and walked away without another word. On my first day, I had arguably broken rule number one for stagiaires: check every button before you walk into a kitchen.

Since that day, I’ve staged at 26 different restaurants across the UK and Europe. I’ve been an airport chef, a butcher, a pastry chef, a bartender, a caterer, I’ve run a kitchen in Hebrew, plated at the pass at a two Michelin star establishment and been cut to shreds at a three star. I’ve had successes and made mistakes throughout, and I’ve discovered a few rules that are universal for every stagiaire.

Walking for two hours along a motorway in the Belgian countryside with a packed suitcase while being followed by all manner of hostile farm animals was not something I’d envisaged for the night before my stage at Hof Van Cleve.

Had I pre-booked a taxi, hired a car, or simply arrived before all transport finished for the day, I would have saved myself from being easy prey for a savage Belgian goose and his entourage. 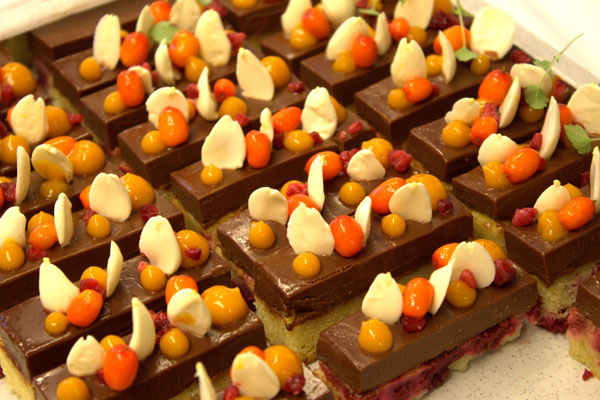 Being offered lamb’s brains at 9am, when all you’re thinking about is scrambled eggs, can be a little jarring. But I couldn’t say no to the head chef when it happened to me at Chamberlain’s of London, and I was immediately in his good books for gobbling it up. The chef de partie who said no, wasn’t.

Always be positive, even if you’re not sure on a task. No chef knows everything and the best thing you can do is ask for a quick explanation if you’re not 100% certain. Better that than pretending you know how to brunoise a carrot when you really have no idea.

The one time I forgot my notepad on a stage, I found myself in the back of a cab afterwards trying to decipher the recipe for a raisin and caper vinaigrette from smudged scribbles on my arm.

They say a journalist should never be without a notepad and the same goes for a stagiaire. You’ll come across all manner of recipes, tips and contacts during a stage, and having a notepad will also make you look more serious about your learning.

When picking a stage, I think about what I want to learn. When I wanted to learn about butchery, I went to see Aubrey Allen, suppliers of some of the best restaurants in England. English food? I found a chef who’d just opened his own pub in the countryside, The Lamb Inn. Traditional Italian cooking? I spent time at a family-run restaurant down a London alleyway that makes the best spaghetti meatballs you’d hope to find. Staging is personal to every chef and it's not always about following the best. 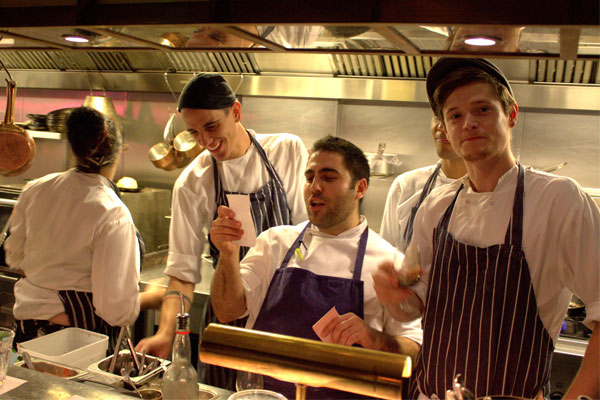 Running a kitchen in Hebrew at The Palomar

In charge of the whitebait starter during service at The Hand and Flowers in Marlow, UK, it got to the point where I had to bypass drying the fish before pushing them into bowls, scalding my fingers on hot oil every time. But that way, service ran smoothly.

Being an unpaid stagiaire in a close-knit kitchen on an unfamiliar station in the middle of a rampant shift is one of the most testing moments any chef will face. It’s long, it’s hard and sometimes it’s painful. But you will emerge a better chef.

6. Learn from your mistakes

At the The Waterside Inn in Bray, UK, one of the sous chefs gave me a bowl of steamed potatoes and asked me to scrape the skin off. After I’d peeled the lot, the sous came back over and practically took my head off. He had literally meant scrape the skin off with a paring knife so as to keep the potato shape. My peeled potatoes went straight in the bin.

While he didn’t speak to me again for the rest of my three-day stage there, I made sure that everything I did from then on, I did to the letter. I haven’t dropped the ball since.

There will be times in some kitchens where your skills won’t be called on and you’ll be expected to observe, which can be immensely tiring if it means watching a six-hour service from the touchline. This has happened to me a few times, most notably at Alyn Williams at The Westbury.

The kitchen was in full flow and I found the perfect spot from which to watch service unfold. With my notepad to hand, I watched and detailed everything I knew would help me. My enthusiasm must have shone through because I was eventually asked to help with canapés.

8. Feel the room and adapt to the atmosphere

Stagiaires in a new kitchen often need to be seen and not heard, especially during their first prep. If the chefs there are chatty, then you’ll be chatted to. This is what I found at Sketch, Pierre Gagnaire’s London restaurant, where the chefs needed to see a certain amount of blood, sweat and tears before accepting a newbie into their midst. At the end of a gruelling five days, I was allowed to plate on the pass and was even asked to stay behind for a beer after service. 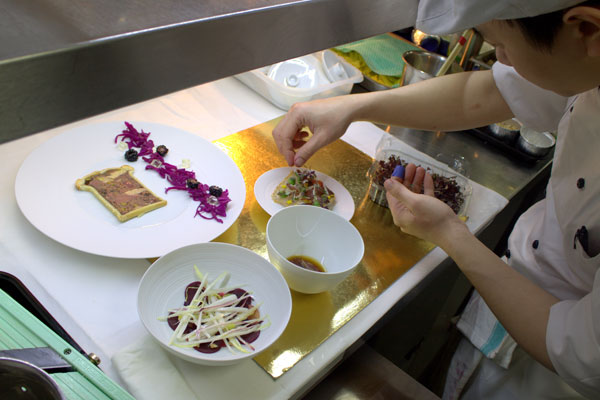 A chef at Sketch

A chef must eat, simple as that. For a stagiaire, lunch can be a chance to mingle and ask the questions you aren’t able to during work. As I found at Le Gavroche in Mayfair, the spread of food can be exceptional. In that case, freshly baked bread, proper French cheese and a huge pot of spaghetti Bolognese. As one chef at Hof van Cleve told me: “Staff lunch is the most important food we make all day.”

“I don’t like rock and roll chefs!” This is what John Williams, executive chef at The Ritz Restaurant in London, told me during my stage there. This generally means avoid clown’s trousers and fancy coloured whites as you might incur the wrath of the kitchen. You’re there to blend in, not to steal the show.

And make sure that button’s done up. Whites or otherwise…


The World's 50 Best Restaurants, in partnership with BBVA, is offering a two-part scholarship in the kitchens of Atelier Crenn in San Francisco and Mugaritz in San Sebastian. Applications for the 50 Best BBVA Scholarship are open to chefs with less than three years’ experience in a professional kitchen and ambitious culinary students over the age of 18 from anywhere in the world. Enter via the applications portal by Monday 5th February 2018.