The art of hospitality at The Clove Club: from Shoreditch supper club to 50 Best

This June, The World’s 50 Best Restaurants will reveal the winner of the first ever Ferrari Trento Art of Hospitality Award, recognising a restaurant for its outstanding service and front-of-house team.

In anticipation of the new award, we step inside the The Clove Club in London, No.55 in The World’s 50 Best Restaurants 2015, to explore a different approach to hospitality.

On a bare wooden table inside The Clove Club, a wine glass with a small measure of hundred-year-old Madeira (“the most expensive thing in the restaurant”) is set down. A waiter instructs the guest to swirl the alcohol around the glass and take a sip before he pours in a similar measure of hot pheasant consommé. Delicate, salty flavours from the roasted bones combine with sweet dried fruit and nuttiness from the fortified wine for a unique, warming experience.

“When we take the bottle over to the table with two wine glasses and a decanter full of hot consommé, we get a lot of teetering and laughter,” says Daniel Willis, one of the co-owners. “Most people are very happy when a tray of what’s seemingly booze is put down as their next course.”

While The Clove Club in east London’s Shoreditch is known for its informal approach to fine dining – the staff don’t top up wine and water glasses and there’s no starched tablecloths or silver service – the Madeira dish is a nod to traditional dining in a more relaxed setting.

“We have a massive amount of respect for the more old-school restaurants and a big part of that is the tableside service,” says Willis. “We wanted to find a tasteful way to do that at The Clove Club.” 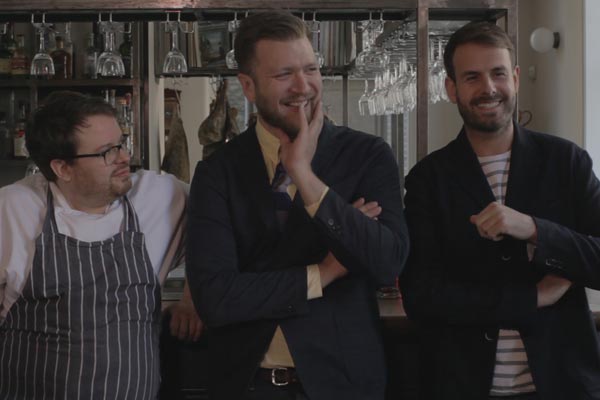 The Clove Club, which entered The World’s 50 Best Restaurants list at No.55 last year and earned its first Michelin star within a year of opening, has made waves across London’s dining scene, gaining a name as much for the food of chef Isaac McHale as for its friendly front-of-house style, led by Willis and business partner Johnny Smith. Part of this, explains Willis, is due to its humble beginnings.

Smith and Willis were long-time DJ friends who moved from Manchester to London together in 2008 to kick start their music career. They knew of McHale through mutual friends, meeting him at a boat party in Croatia and then later through chef James Lowe, who would later found Lyle’s restaurant, just round the corner from The Clove Club.

At their east London apartment, Smith and Willis decided to turn their love of house parties and homemade gourmet pork pies into a proper business and so the original incarnation of The Clove Club, a dining event in their own living room, was born.

“We’d been to a couple of supper clubs and weren’t particularly impressed by them,” recalls Smith. “We thought ‘we should do this, we could do something really good,’ and that was the start of an era. Isaac helped at the first one and we got on with him really well so we asked him to do the second one. That was when we really clicked.” 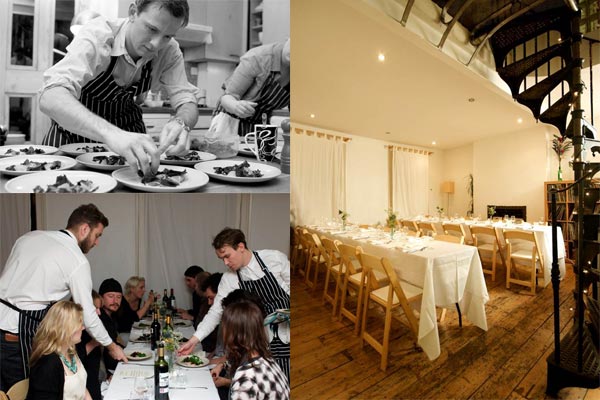 The first supper club took place over three nights in November 2010 with Lowe in charge of the kitchen and McHale helping out. Sofas were upended and long tables were brought into their Manhattanesque loft-style living room to seat 24 people, with candles, lights and tablecloths.

“We served smoked Old Spot bacon with chestnuts and Brussel tops and iced goat’s milk with beetroot granita, which my Dad didn’t like,” recalls Smith.

After the smash hit success of further three-night supper club series at their flat in 2011, Smith and Willis teamed up with McHale, deciding the next natural step was to open a permanent restaurant together. Shoreditch Town Hall, in a previously rundown area of east London known for its ‘hipster’ vibe and home to a vibrant nightlife scene, would be home to The Clove Club.

“We stole the name,” says Willis. “We wanted something that was related to the area and The Clove Club was the name of the Old Boys’ Club at Hackney Downs School, which was just at the bottom of our road and had recently closed. The club has now reformed and some of the boys got in touch so we invited them for lunch. We’re now friends.”

With its stripped back interior, high ceilings and blue-tiled open kitchen, the restaurant space is both casual and comfortable. Dishes are explained in detail at the table, but wine and water glasses aren’t topped up throughout the meal so that guests aren’t constantly interrupted. 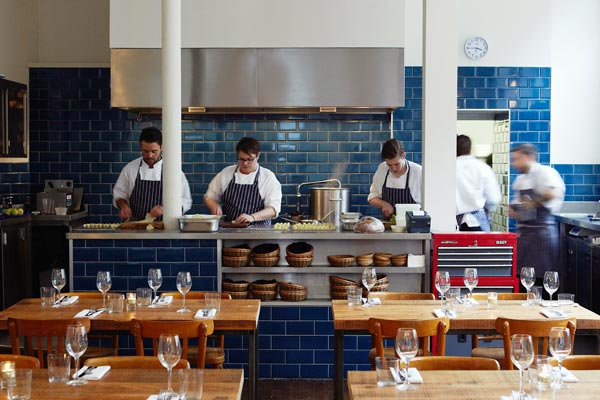 McHale (centre) with his kitchen team

“I’ve spent my life feeling uncomfortable in restaurants,” explains McHale. “Increasingly, people don’t want the luxe and finery and really plush carpets and silver, silver, silver. They can appreciate really amazing food and service in a more relaxed setting where they can feel comfortable.”

Willis agrees, adding that if they notice a guest isn’t topping up his wine and clearly expects it from the staff, they will swoop in and do so. At the same time, he encourages wait staff to engage with guests and develop a rapport with them when appropriate.

“We call it adaptive service,” says Willis. “From the moment anyone enters the restaurant, their experience starts, and from the moment you interact with that person, your understanding of the guest starts and the relationship begins. We glean information that influences the way we serve people. Not all restaurants trust their staff enough to do that, but that’s the way we like to approach it.”

It’s clear from the reception The Clove Club has had – the restaurant is often fully booked two months in advance and has won awards including the reader-voted Square Meal award for Best Restaurant in 2015 – that part of its appeal is based on the friendship between the trio that comes across through the service.

“The experience of coming to The Clove Club is as much about being greeted by Johnny or I and being looked after by the front-of-house team as it is about Isaac’s amazing food,” says Willis. “What the three of us have achieved is, I hope, greater than the sum of our parts.”

Hear what The Clove Club team says about hospitality: