At the heart of chef Paul Pairet’s flight of fancy – which takes the form of one of the most avant-garde restaurants in the world, Ultraviolet by Paul Pairet, set in Shanghai, China – is an intricate notion of how the mind influences taste and how restaurateurs can take advantage of it to craft an innovative dining experience.

The French cook gave an insight into Ultraviolet by Paul Pairet and the notion of psychotaste at #50BestTalks: Life Cycle, presented by Miele.

When Paul Pairet first had an idea for his own restaurant, while working in Australia in 1996, his concept was about taking freedom away from the diner. This may seem a paradox now, given that the resulting restaurant, Ultraviolet by Paul Pairet, won an Art of Hospitality Award for Asia’s 50 Best Restaurants this year, which goes to show that the chef’s taking away actually gives back to the guest more than it detracts.

Speaking at #50BestTalks: Life Cycle last month, the chef said: “I felt frustrated at the time, because I wanted to get rid of all the constraints of the professional restaurant in order to cook at my best. To cook at your best you have to remove the guests’ freedom to decide at what time they’re going to the restaurant, what they’re going to eat and at which tempo.”

Opening Ultraviolet by Paul Pairet, he saw an opportunity to do things his own way. First, he got rid of the à la carte menu, taking away an element of choice. Then, he decided that all guests would start the dining experience at the same time and have the same dishes according to a tempo orchestrated by the chef. “We decided to serve the food at its peak. As a consequence, we had to control the offer and the time. Then, I could ultimately control this last intangible part of the dining experience that is everywhere: the atmosphere,” said Pairet. 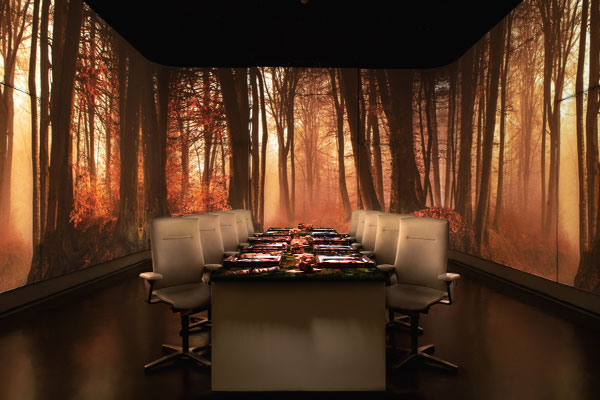 It is for these reasons that the dining experience at Ultraviolet starts with the guests – only 10 per night – meeting at the chef’s other Shanghai eatery, Mr & Mrs Bund, from where they are driven in a blacked out mini bus to a secret location in the city. Here, they enter a purpose-built dining room that has the ability to transform itself into countless different scenarios, or atmospheres, in which visual, olfactory and sound elements are designed to enhance the dishes.

The desire to control the atmosphere stemmed from Pairet’s early experiences of food as a teenager growing up in the south of France. Around the age of 13, he was cycling near the city of Perpignan in the Pyrénées-Orientales department, close to the Mediterranean coast. “I stopped at a field of peach trees,” said Pairet. “I got off the bike and I took one of the last peaches that had been forgotten in the harvest. It was full of sugar, the best peach I had ever tasted, and along the way, it became my reference for all other peaches.”

But Pairet realised that it wasn’t only the fruit itself that had made that particular peach the best he had ever had. “Because of the context, because of the peach trees surrounding me, because of the sun setting behind me, this peach was the most belonging peach that I had ever tasted,” said the chef. This sense of belonging – of experiencing a certain food within the atmosphere that suits it best – is one of the principles behind the notion of psychotaste.

The purpose of Ultraviolet by Paul Pairet’s dining room is, then, to provide the best possible atmosphere that will create that sense of belonging for each course served, so that when the guests taste it, they are influenced to anticipate its taste based on the setting. “Psychotaste is everything beyond the taste. It’s the taste of the taste. If you can anticipate the taste, you can play on the mind to trigger the way you will eventually perceive the taste,” said the chef. 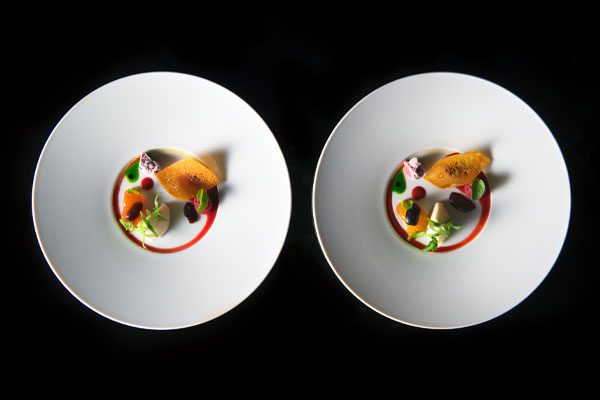 The experience at Ultraviolet includes courses such as The Sea, which is served to the visuals and sounds of waves crashing around the diner. While you eat a dish called Mushrooms, you are surrounded by the forest and the crackling of wood in a fire, as if the mushrooms had just been cooked on the campfire. Black pepper beef is served to images of walking up to a makeshift food stall, surrounded by the Singapore skyline.

“Because you anticipate the taste based on all the elements that are influencing you, the perception of the taste will come as a differential between what you have in your mind and what you’re tasting in reality,” said Pairet. “Inside of Ultraviolet, we tailor the atmosphere to the dish, to create that differential and play on the way you are anticipating the dish you are about to taste.”

Pairet has other aces up his sleeve and other ways he can influence the diner’s mind – he created a course with two identical dishes, one made with sweet and one with savoury ingredients, and devised a bite that looks like a chocolate pastry, but is instead made of foie gras – but the chef is always looking for new ways to surprise and delight his guests, pushing the boundaries of the restaurant experience even further.

Watch the full talk by Paul Pairet at #50BestTalks: Life Cycle, presented by Miele, at the Basque Culinary Center in San Sebastian: