Reindeer, fine dining and foraging: why Norway’s Trondheim should be on your foodie bucket list

Once a sleepy town in the far-flung reaches of Norway, Trondheim is making its mark on the global culinary scene. Sporting sunshine, salmon and scores of small-scale producers, this is a city on the rise – 50 Best explores its culinary delights in partnership with Visit Trondheim and Norwegian

It’s a balmy late-summer morning in Trondheim. Sun dapples the hillsides blooming with plant life; a lone fishing boat bobs in the river Nidelva, and a pod of porpoises ripple the surface of the Trondheim Fjord. This bucolic atmosphere has been a constant of Norway’s third-largest city for hundreds of years.

Home to many of the nation’s best farms and breweries – and some of the greatest salmon fishing spots in the world – Trondheim, and the surrounding region of Trøndelag, has always boasted unparalleled produce. Today, the city is home to popular vegetable markets, successful bakeries, and most appealingly, standout dining experiences.

But this gastronomic cornucopia has only recently caught the attention of the international culinary community, and with Trøndelag being named the European Region of Gastronomy for 2022, Trondheim is now starting to take its worthy place on the world stage.

Among the first to arrive on the restaurant scene was Credo. As the artistic vision of Norway’s pioneering female chef, Heidi Bjerkan, Credo began to cast a spotlight on the region when it earned a coveted Michelin Green Star in 2019, and a place on 50 Best Discovery. 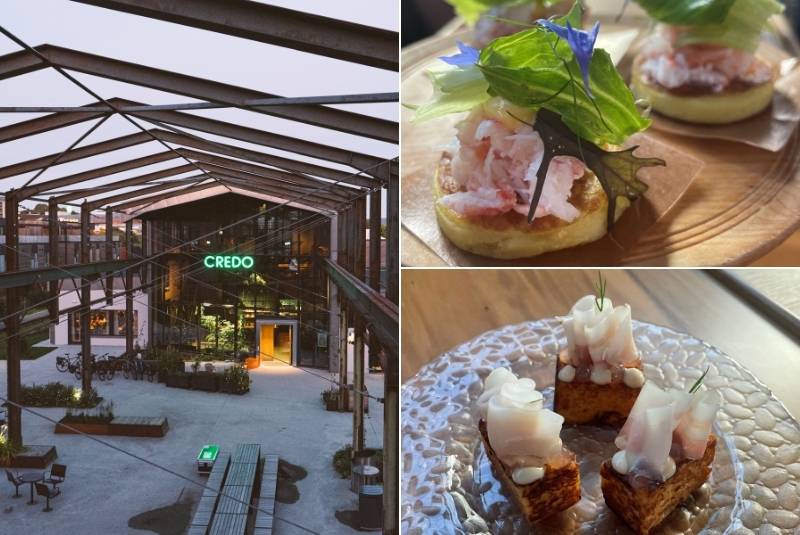 The exterior of Credo, and two dishes from the tasting menu: potato bread and langoustine, and French toast with truffle emulsion and in-house aged pork fat

In 2018, Bjerkan bought the spacious venue – a converted milk carton warehouse that can host up to 50 covers across the dining room and upstairs mezzanine. Both the local fare and unusual décor are a nod to her focus on sustainability and authenticity. Large flowerbeds and vegetable gardens line the floors and old graffiti is still daubed on the stone walls.

The Norwegian chef’s tasting menu, a micro-seasonal marathon of 22 courses, showcases Trøndelag’s varied produce, with the likes of crab with elderflower and fig oil, and baby leaf with raw shrimp, wasabi and a garnish of flowers from the garden. Credo’s dishes are fresh and light, and each is presented alongside a well-chosen wine pair. With vibrant green jus of horseradish and cream, a stoic mountain of freshly churned butter, and a playful langoustine tail presented a lollypop, Bjerkan’s dishes are intended first to be eaten with the eyes.

Bjerkan also encourages her team, often made up of young cooks eager to learn about the region’s food, to avoid wasting by-products: even the ceramic crockery is varnished with the shells of their langoustines.

With its flourishing gardens and network of small-scale producers, Credo is a model of self-sufficiency. The restaurant’s suppliers are valued so highly that some even take pride of place in framed photographs on Credo’s walls: the precious dairy cows, named Sollaug, Raulin, Bergrosa and Lucy 2.

Owned by a farmer and his wife, Carl Erik and Elin Skjølberg, these cows provide all the milk for Credo’s dairy products. Chef Bjerkan points them out to every guest who passes through her restaurant. “That’s so important to me,” she says while waiting on the table. “We make good food, which I love to do, but the collaborations with local producers are what make a difference.” 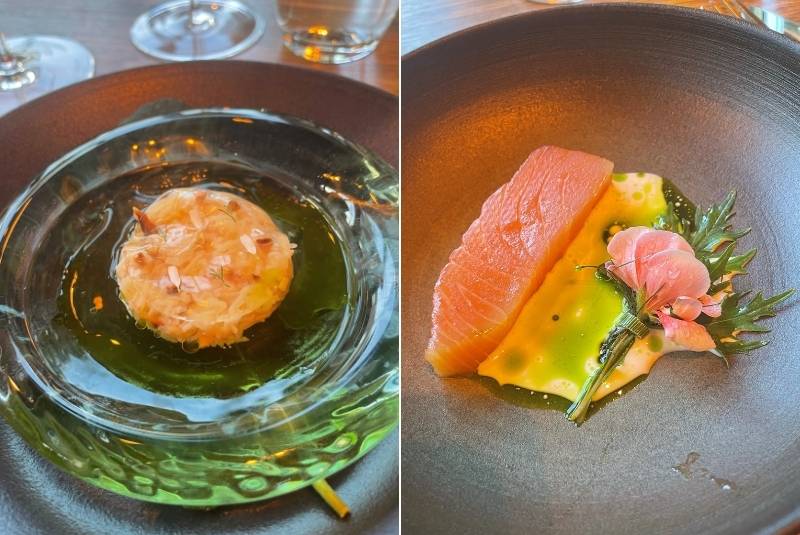 Bjerkan's crab with elderflower and fig oil, and cured smoked salmon with a flower bouquet and jus of horseradish and cream

Blooming alongside the farmers

The Skjølbergs are one among many families who have pivoted in favour of agriculture in Trondheim. Encouraged by the promising bounty of the region, they set up a small property on the border of the city, beginning with two dairy cows, seven young cattle and a patch of soil in which they intended to grow vegetables.

Now, with the region’s bovine celebrities grazing on more than nine hectares of fertile land, the Skjølbergs regularly supply Credo and two other top restaurants in Norway with high-quality, seasonal vegetables, meat and dairy. For both Heidi Bjerkan and Carl Erik Skjølberg, the success of their symbiotic venture lies in the circularity of the food production.

“It’s all about the connection with plants and animals,” proclaims Skjølberg. “We’re a biodynamic farm, so none of our materials are wasted. We don’t need to import fertiliser from Brazil or dispose of the manure from our cows. Everything is cyclical. It’s a story that needs to be in everyone’s mind at the international level when producing food.”

Jim André Stene, founder of the harvesting company Trøndelag Sankeri, is another Norwegian who found his calling in agriculture. The self-proclaimed mushroom enthusiast decided to leave his office job in 2019 and delved full-time into his passion for foraging. After studying indigenous varieties of seaweed, herbs and mushrooms (of which there are more than 4,000 species in Norway alone), he now picks and supplies produce to 134 restaurants across the country and leads a popular foraging course, offering visitors the chance to try their own hand at recognising and picking edible wild plants. 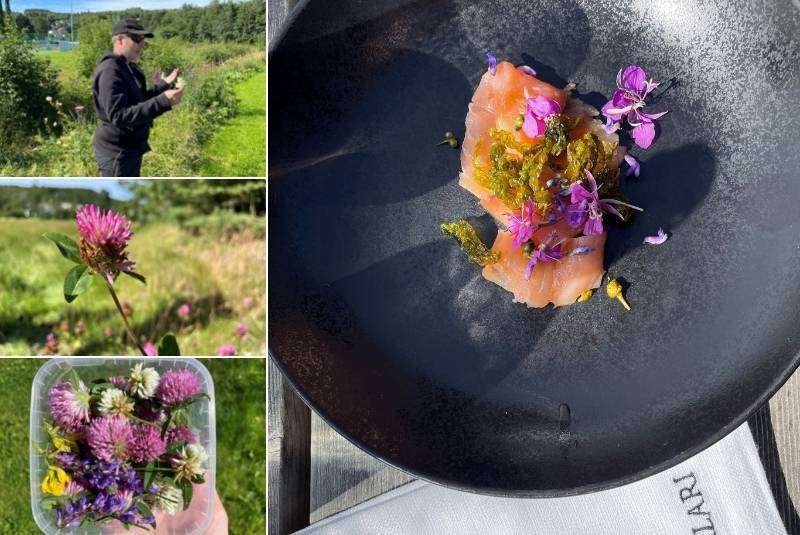 “This is meadowsweet,” he says enthusiastically, picking at an innocuous-looking flower growing on the edge of the fjord, “and this is red elderberry. Most people think it’s poisonous, but if you cook the flesh, you can use it in desserts – it tastes like plums and gooseberries.”

Not wishing to try his luck with the berry today, Stene bustles over to a nearby glade where he has spotted some edible mushrooms, virtually invisible to the untrained eye. In fact, most of the meadow is seemingly ripe for picking. In the spring and summer months, Trondheim’s countryside is positively groaning with produce.

You can find a plant to suit almost any palate, but not always with conventional foods. Sitting only a few hundred miles outside of the Arctic circle, Trondheim has a cooler, northern climate that prohibits the growth of tropical or citrus plants – so this is where Stene gets creative.

“If you remove the stems from meadowsweet, dry it and make a powder, you can make litres of vanilla ice cream,” he explains. “Seaside arrowgrass is a good alternative to coriander and is used in Asian cuisine.” Then, lowering his voice conspiratorially but with a twinkle in his eye, he imparts one of his greatest secrets: “If you want to bring acidity into a dish, you can use red wood ants!”

Turning the spotlight on Trondheim

The region actively encourages its citizens to learn from foragers like Stene and to develop their gastronomic businesses, so the promotion of Norwegian produce is incentivised with events and prizes. The Trøndelag Food Festival is perhaps the biggest event in the calendar for many of the region’s small-scale producers. Hosting more than 200 stalls and 30 breweries, it’s an annual carnival of mussels, salmon, the speciality brown cheese, and many more delicacies.

Lying over Trondheim’s central square and main streets, the festival is a sprawling mass of tents, excited buzz and delicious aromas. You can travel hundreds of miles in just a few steps: sample the freshest salmon on sourdough caught from the untouched archipelago of Hitra and Frøya, try bitesize cherry tomatoes drizzled with fresh pesto from the tiny Frosta peninsula, and journey north to snowy Røros for a taste of reindeer meat. 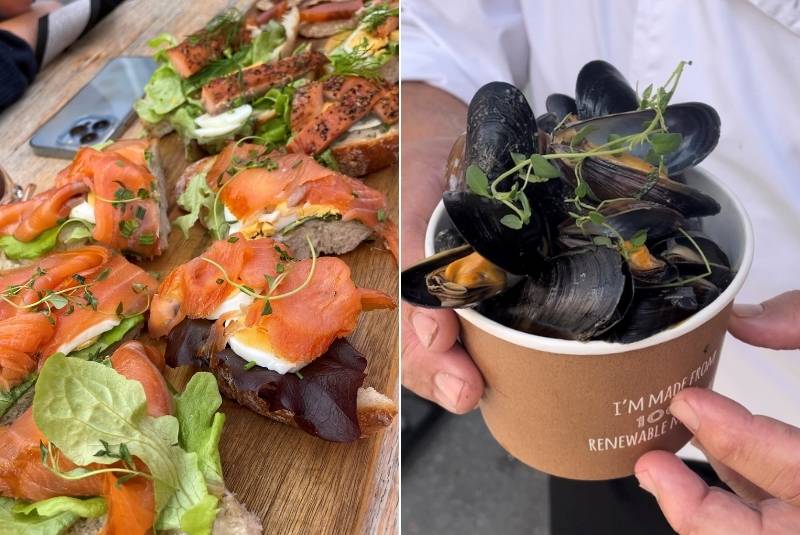 Smoked salmon on sourdough, and fresh mussels from the Smaker fra Øyriket group in Hitra

The festival was established in 2005, followed by its accompanying Brewery Festival in 2013, but is only now beginning to garner wider attention. The 2022 event welcomed 250,000 visitors, and the numbers are expected to rise.

Thanks to the European Region of Gastronomy award and the promotion of events like the Trøndelag Food Festival, gastronomes are travelling far to sample the region’s cuisine. With world-class restaurants sprouting throughout Trondheim, which is also set to host the internationally acclaimed Bocuse D’Or chef competition in 2024, the city is rising higher on many food-lovers’ bucket lists.

“The most valuable thing from the Food Festival is that we connect and talk to each other about our projects,” says one salmon fisherman from the Smaker fra Øyriket group, “but now, the aim is to get that message out there. We are a top gastronomic destination, and we want the world to see that.”