Away from the spotlight, inside an inconspicuous colonial house in Cartagena, Colombia, two chefs are cooking up a revolution as they investigate the underrated culinary traditions and produce of the Caribbean coast. Step inside Celele, the winner of the Miele One To Watch Award 2019 for Latin America’s 50 Best Restaurants, sponsored by S.Pellegrino & Acqua Panna

When chefs Jaime Rodríguez and Sebastián Pinzón met in Cartagena, they discovered they had something surprising in common. Both hailed from Andean towns in mountainous Colombia and both were intrigued to investigate a different, undiscovered part of their country’s gastronomic culture. When they joined forces to create Proyecto Caribe Lab, they couldn’t have guessed the success the initiative would become.

Cartagena, a vibrant port city on Colombia’s northern coast, is more popular as a beach destination than as a gastronomic hotspot. But Rodríguez and Pinzón saw the city as a gateway to Caribbean Colombia, a region blessed with tropical climate, plentiful seafood, extensive plantations and a rich gastronomic culture – all still relatively unknown.

“We learned that the cuisine of Caribbean Colombia is a great mixture of cultures, with Syrian-Lebanese, African, European and indigenous influences,” says Rodríguez, co-founder of Proyecto Caribe Lab and now chef at Celele, the restaurant born out of the initiative. “We found a surprising cuisine with a mixture of interesting ingredients that almost nobody knows, because people often think that Colombian-Caribbean cuisine is all fried fish, coconut rice and fried plantain.” 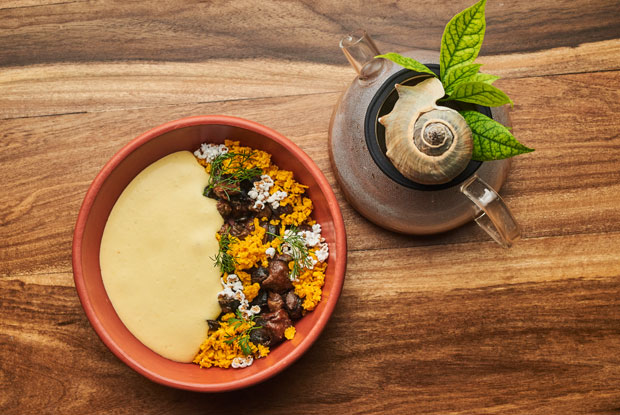 Pateburro snail and textures of corn

The two chefs wanted to go deeper in their explorations of the territory. It wasn’t long until Rodríguez and Pinzón quit their cooking jobs to follow this shared dream – and thus, Proyecto Caribe Lab was born as a simple pop-up dinner that showcased the best Caribbean produce the chefs could source from Cartagena’s market.

“The first dinner gave us money to fund a research trip to La Guajira, the desert and the northern part of the Caribbean,” says Rodríguez. “Then, we went back to Cartagena and made another pop-up dinner. That allowed us to travel to Mompox in Bolívar, the savannah of Caribbean Colombia. We did some research there and returned to Cartagena to organise another dinner, and so we had the money to move forward each day.”

For two years and a half, Rodríguez and Pinzón explored Caribbean Colombia far and wide, cooked with the indigenous families, foraged and tested ingredients, documented their findings and cooked for their increasingly popular dinners in Cartagena. At the end of 2018, after striking alliances with the Basque Culinary Centre and the Botanical Garden in Cartagena, the chefs decided to give Proyecto Caribe Lab a permanent home.

Celele, which today is named the winner of the Miele One To Watch Award 2019 for Latin America’s 50 Best Restaurants, is the result of everything that the two Colombian chefs have been working towards. “Celele's concept is contemporary cuisine based on the gastronomic culture and biodiversity of the Colombian-Caribbean territory,” says Rodríguez. “At the same time, Proyecto Caribe Lab has become a reference in Colombia and beyond, as people have become aware that two cooks with the desire to do something different achieved such an important project.” 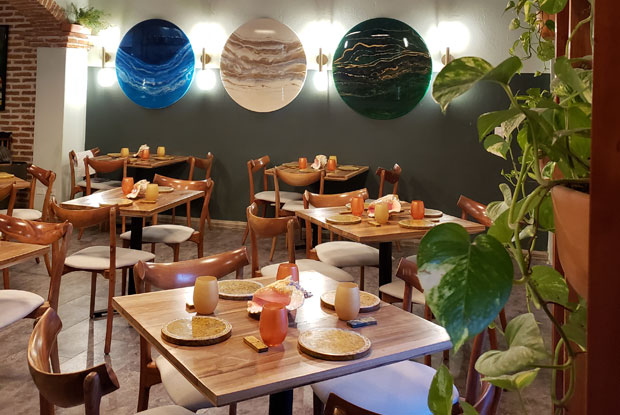 Housed inside a colonial house in the Getsemaní neighbourhood of Cartagena, Celele showcases the discoveries and relationships that Rodríguez and Pinzón have made on their travels over the last three years. The cosy space, with timber wood details and natural stone walls, is full of the work of local artisans. “Every space in Celele was designed to show and breathe the Caribbean. Dishes are made by local artisans, the furniture and wooden tables are made by Colombian-Caribbean carpenters, and the bar has a large mural that shows the geography and traits of Caribbean people,” says Rodríguez.

On one wall, three round pieces of art represent the three colours of Caribbean Colombia: the deep blue of the Caribbean Sea, the dark yellows of La Guajira Desert, and the green of the Sierra Nevada de Santa Marta and the Montes de María. The à la carte menu is also inspired by these areas, with dishes that evoke different locales of the region.

Celele also offers two tasting menus, one of five and one of 10 courses, both the product of Rodríguez’s creativity – he is the Creative Development and Research Chef, while Pinzón covers the sustainable development and product investigation side of the business. Rodríguez wants to make sure that everything at the restaurant reflects the Caribbean, and his dishes often recall the region’s colours and incorporate its flowers and fresh fruits.

One of the restaurant’s most popular dishes, a goat stew cooked in coconut milk with dried shrimp rice, was inspired by the indigenous communities that live in La Guajira Desert, known as Wayuu. “The Wayuu live in a desertic area by the sea,” explains Rodríguez. “They catch shrimps and dry them in the sun, because they have no way of preserving their food, so they dehydrate everything.

“They traditionally make rice with a spice called achiote, sweet chili, garlic, onion and dried shrimp. It is a rice that is very colourful and strong in flavour. They often consume it alongside wild animal meat stewed in coconut milk. In our version, we use goat meat because the goat is an animal that is very important to the Wayuu.”

To make his contemporary version of the dish, Rodríguez cooks the goat meat sous-vide with coconut milk, giving it a tender, uniform texture, and serves it alongside dried shrimp rice topped with dehydrated grains to add some crunch, fried cabbage leaves and crispy shrimp legs. It is served on a plate that evokes the colours of the desert; a reminder of its origin. “This is a dish people love – they say ‘wow! This is flavour’,” reflects Rodríguez.

As well as researching culinary traditions and ingredients, Rodríguez and Pinzón are also pushing to make sure that the local communities receive the credit they deserve. To make their goat stew dish, the chefs buy dried shrimps directly from Wayuu families. “Sebastián travels every week or two to different parts of Caribbean Colombia to bring us raw materials bought directly from producers and farmers. Celele is pretty unique in Colombia because of this way of doing things,” says Rodríguez.

With the restaurant being named the Miele One To Watch 2019 for Latin America’s 50 Best Restaurants, the chefs hope to show the world their passion for Caribbean Colombia. “Our project marked a blueprint. It marked an intention in the Colombian-Caribbean region that people want to know much more about the products of its pantry and its traditional dishes. That has always been our goal – to show through this project that Caribbean Colombia is a gastronomic powerhouse.”

Meet the chefs and discover Celele in the video:

Rodríguez and Pinzón will receive the Miele One To Watch Award 2019 at the Latin America’s 50 Best Restaurants 2019 awards ceremony on October 10 in Buenos Aires, Argentina. Tune in to our Facebook page at 20:45 Buenos Aires time to watch the ceremony live, and follow us on Instagram, Twitter and YouTube for the latest news.