#50BestTalks in Latin America - Vegan 'meat' that looks like meat, banning photos and being a mother in the kitchen

The beginning of a meal and its final course took centre stage in Buenos Aires at last month’s #50BestTalks: Pan y Postre [bread and dessert], presented by Miele. As part of Latin America’s 50 Best Restaurants, four of the region’s top chefs discussed these key elements of a meal, alongside special guest chef Dabiz Muñoz

Find out what happens when you put meat with ice cream, which is the champion out of melted chocolate and dulce de leche, and why bread is banned at Diverxo, Muñoz’s celebrated Madrid restaurant.

“As humans, we are afraid of the unknown,” said Joaquín Grimaldi, serving a pancetta-laced ice cream burger to an audience of 200. “But luxury must be enjoyable – there has to be a fun side to the gastronomic experience.” That is why, when he began making desserts and ice creams for the Four Seasons Hotel Buenos Aires more than 20 years ago, he quickly started experimenting with unusual flavours – adding whole cookies and even meat to his creations. “Back then, the only ice cream flavours were vanilla, strawberry, chocolate and dulce de leche. I get bored very quickly so I started to play.”

Creativity has always been important to Grimaldi, who was set to be a rock star until he saw the late Argentine chef Gato Dumas on the TV as a teenager and decided to follow his footsteps. In the years since, he has created the iconic ice cream brand Dolce Morte and helped the Four Seasons gain a reputation for gastronomic excellence. But he also has a serious side, and has made his desserts healthier, reducing sugar in the brioche bun for his Dolce Morte Burger by 40%. Above all, he says desserts must be delicious and fun – and for that, the customer must remain open too. “It’s important to break boundaries,” he said. 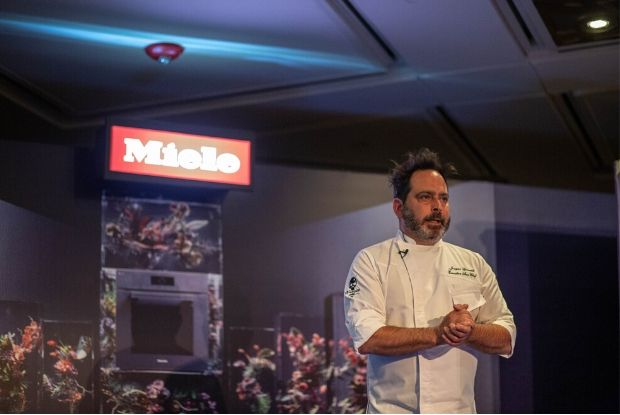 Grimaldi gets passionate about ice cream

When Rosetta first opened 10 years ago in Mexico City’s artsy Roma district, the locals began to knock on the door, asking to buy freshly baked bread. Years later, Elena Reygadas opened Rosetta bakery, primarily to feed the locals and later expanding with sweet and savoury breads and pastries as demand from tourists grew. The popularity of her bakeries, according to Reygadas, is in part because of Mexican tradition. “Bakeries were a place where people got together to socialise, an important place for culture.”

Reygadas used the spotlight to call out industrial bread makers like Bimbo, which she says have not only taken away the nutritional value from their factory-made loaves but also “robbed us of the memory of the flavours, smells and even the names of our breads”. At Rosetta, she rejects industrial processes, giving emphasis to “slow and respectful” craftmanship using the best possible ingredients. Her bakeries sell sweet products such as pan de muerto and conchas, which symbolise religious beliefs, as well as savoury breads that bring customers back to their childhoods. “Corn is the backbone of Mexican culture,” she said. But when wheat arrived with the Spanish conquest, “Mexicans adopted it and made it our own. Now it is an important part of our culture.” 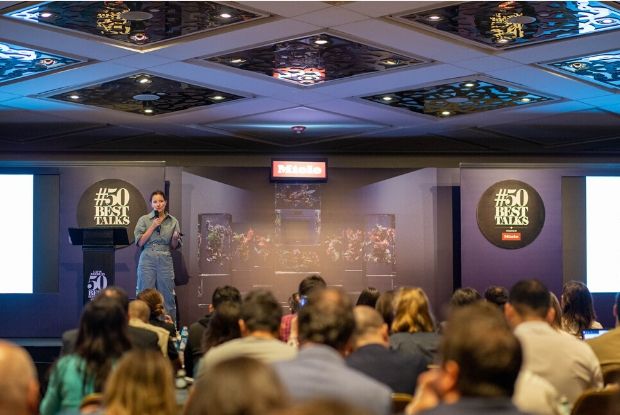 “A dessert can either make or break a meal,” said Jesús Escalera, who made the bold move of opening his own dessert-only restaurant in Guadalajara in 2013. He says that while traditionally some restaurants have seen dessert as an after-thought, they are now giving more attention to the finale of a meal, partly thanks to top pastry chefs such as Jordi Roca. But he wants to change the perception that dessert always has to be sweet. “Ingredients like peas, beetroot, black truffle and cinnamon are neither sweet nor savoury. When you realise that, it changes everything. It’s a bit of a sweet revolution.”

Seville-born Escalera also talked about his learnings as a young chef. While his CV includes two of the world’s most progressive restaurants, El Bulli and The Fat Duck, he says one of the biggest things he learned was teamwork. “In those restaurants there is so much pressure and competition, but what surprised me at The Fat Duck was they played music like Metallica at high volume during mise en place. If one day you were running at 50%, everyone would help you out. That teamwork really stayed with me and I try to use it now.” 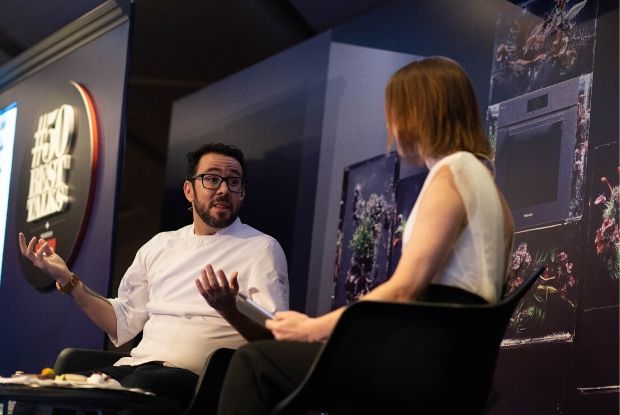 Escalera talks pudding and pulling together as a team

Right before Vanessa González went on stage, there was an eruption of whoops from the audience – it had just been announced that she would be serving her version of the ultimate Argentinian and Uruguayan sweet treat: the dulce de leche volcano. Their reaction was no surprise to the chef, who believes in the role of childhood memories in food. “When the dessert menu arrives at the table, it’s a dilemma – they have to choose between the chocolate volcano or the dulce de leche. It creates an emotional conflict between kids, parents and friends, and the volcano is the prize at the end.”

In Parador La Huella’s unofficial ranking, the dulce de leche volcano almost always wins over the chocolate. That might be because the sweet, caramel-like substance is made from González’s family recipe. “My mother would make it with fresh cow’s milk over three days.” Now, Parador La Huella is a family affair – González’s mother has worked there, and the chef’s sister and one of her brothers are part of the team too. All this comes together for a special dining experience at the restaurant’s unique beach location in José Ignacio, Uruguay. “We’re located on white dunes, looking at blue sky with the cool shade of our roof. It’s all part of the experience.” 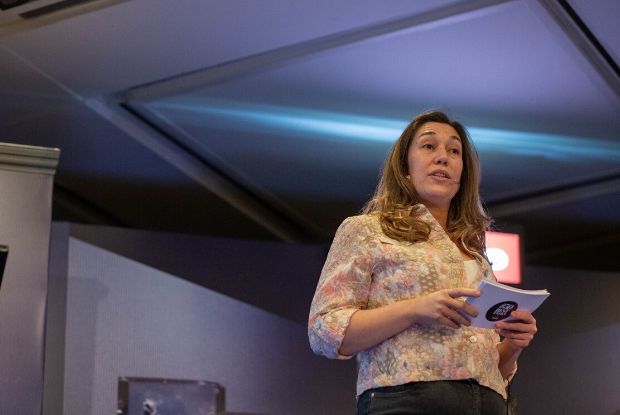 Following the four talks, the speakers welcomed renowned Spanish chef Dabiz Muñoz to continue the discussion on bread and dessert and delve into wider restaurant world themes. Here are a few key takeaways…

On bread and dessert at Diverxo:

“There is not a part where savoury ends and sweet begins,” Muñoz said of his approach at Diverxo in Madrid. “It’s almost a progressive change.” Nor does bread feature as a course at Diverxo, except as an element of a dish when necessary. “Each dish is thought out so that you have the exact quantity of each element. For me, adding bread would take away from what I’m trying to achieve with flavour, texture and concept.”

When questioned about the effects of social media on their restaurants, Reygadas admitted she gets anxious if her food goes cold while customers are photographing it. Muñoz said that he had briefly banned photos at Diverxo, wanting to keep the “aura of mystery and enigma” that El Bulli had before social media was invented. But he quickly realised it was impossible to avoid, and that “the positives of social media by far outweigh the negatives.”

On the essential elements of a meal:

When the panellists were asked by audience member Gerardo Vázquez Lugo to name the one thing they want from a restaurant as a customer, the responses were mixed. Grimaldi wanted flavour; Escalera favoured service; González wanted fresh produce and Reygadas said the restaurant must have its own identity. Muñoz, who is known for his creative and often surprising presentations, said: “As a diner, I want flavour. A restaurant might have the ‘wow’ factor but if I taste the food and it’s just okay, it loses its appeal.”

All speakers agreed that they would always adapt their menu to diners with specific needs. Reygadas said she is opposed to creating bread that looks like bread but isn’t bread – “there are always alternatives.” Muñoz expanded on the point, adding: “Sometimes the vegan industry seems entirely focused on selling things that they are not – a burger that isn’t meat, cheese that isn’t cheese, chicken that isn’t chicken. But they’re ultra-processed, so that sort of vegan product isn’t good quality. We have to turn our backs on that and see that there are lots of natural alternatives.” 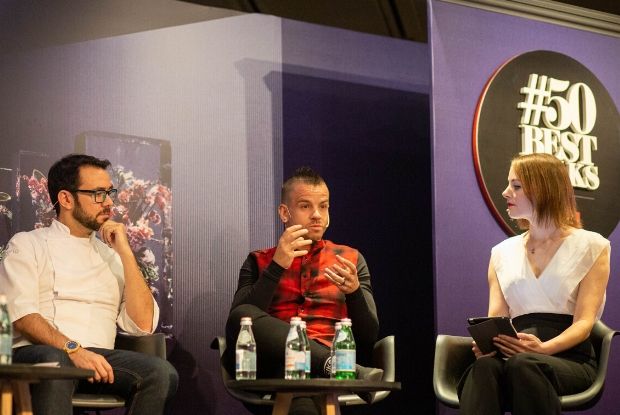 Muñoz joins the panel to add his weight to the discussion

On sustainability and climate change:

When asked what measures they are taking in their restaurants to protect the planet, Escalera said he is moving to solar energy, Grimaldi said he is using bamboo instead of plastic and feeding leftovers to children in need, while González has replaced disposable staff cups for glass ones. Muñoz and Reygadas both said they buy from small, local producers, with the latter also significantly reducing meat protein on the menu.

On gender balance in the kitchen:

Admitting that the kitchen is still a chauvinistic environment, Muñoz called for society to redress the balance of parenting. “Mothers find it more difficult to work in restaurants than fathers because society assumes the mother has to look after the children. Why can’t it be that the father looks after the kids while the mother returns to work?” Both Reygadas and Muñoz agreed that they can support mothers by allowing them to work the day shift.