Everything you need to know about soba noodles

Soba restaurant Honke Owariya in Kyoto, Japan, holds over three centuries of knowledge and expertise about buckwheat noodles. Ariko Inaoka, the 16th-generation owner and first woman to run the business, left a successful career as an international photographer to take over her family’s restaurant in 2014. Here she shares everything you need to know about the Kyoto variety of this slurpable Japanese favourite

What are soba noodles and what’s their story?

Soba is a variety of Japanese noodles made from buckwheat flour whose origins date back to the Middle Ages. “Soba is a powerful, high-vibration food,” says Inaoka. “Before going into deep meditations and long fasts, Zen Buddhist monks used to eat buckwheat flour and water mixed into a ball. The technique to make soba noodles was later brought to Kyoto from China by a monk named Shoichi-Kokushi in the 13th century.”

With Zen Buddhist temples multiplying in number and the demand for buckwheat noodles growing steadily, the 16th century saw temples turn to confectionery shops. The staff – who were already proficient in kneading, rolling and cutting techniques – would make soba noodles for the monks and thus expanded their enterprises. At that time, Honke Owariya had already existed as a confectionery shop for over 100 years, having been founded in 1465. Around the turn of the 18th century, the current owner’s ancestor Denzaemon Inaoka began supplying noodles to the temples, and his shop was later designated as goyo-soba-tsukasa: an approved supplier of soba noodles to the imperial palace in Kyoto. 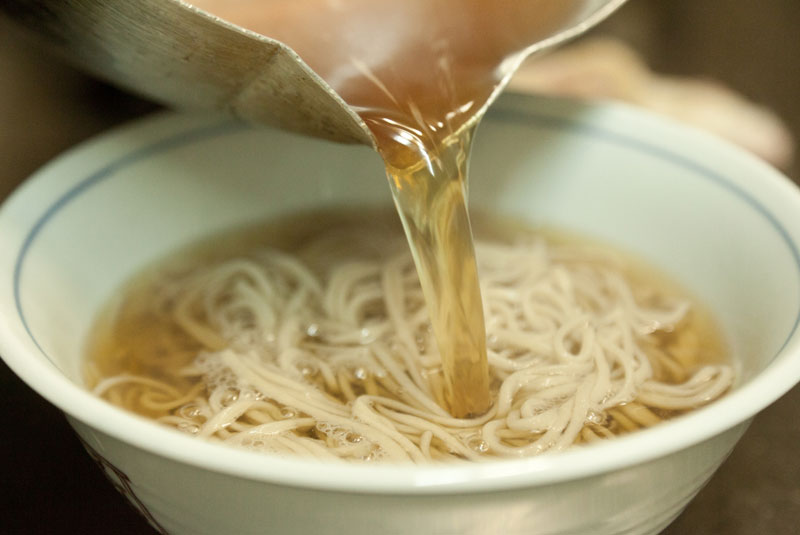 “Soba is a very spiritual food,” says Inaoka. “Monks would eat the noodles as their last meal before going on a 10-day fast. It doesn’t make your body feel heavy or tired – it’s a very special kind of food.” To this day, Honke Owariya has a close relationship with three temples in Kyoto. Zen monks visit the restaurant monthly to hold a Buddhist sutra chanting for Inaoka’s ancestors, after which it is custom that the monk picks a soba dish of their choice.

Soba noodles only require two essential ingredients – buckwheat flour and water – so it is crucial that these elements are of the highest quality. Some recipes, including Honke Owariya’s, also call for a small amount of wheat flour to improve texture. Inaoka’s restaurants boast relationships with suppliers that go back generations: the buckwheat flour they use, for instance, comes from trusted producers in the village of Otoineppu on the northern Japanese island of Hokkaido.

Even more important than the buckwheat is Kyoto’s water, long considered among the purest in Japan. Honke Owariya’s main restaurant, located near the Kyoto Imperial Palace, has its own 50m deep well, which brings fresh water from Mount Hiei that is filtered through mineral-rich stones. Water from the well, which is used to make noodles as well as to cook them and make dashi broth, is delivered daily to the restaurant’s other branches to ensure consistent quality. 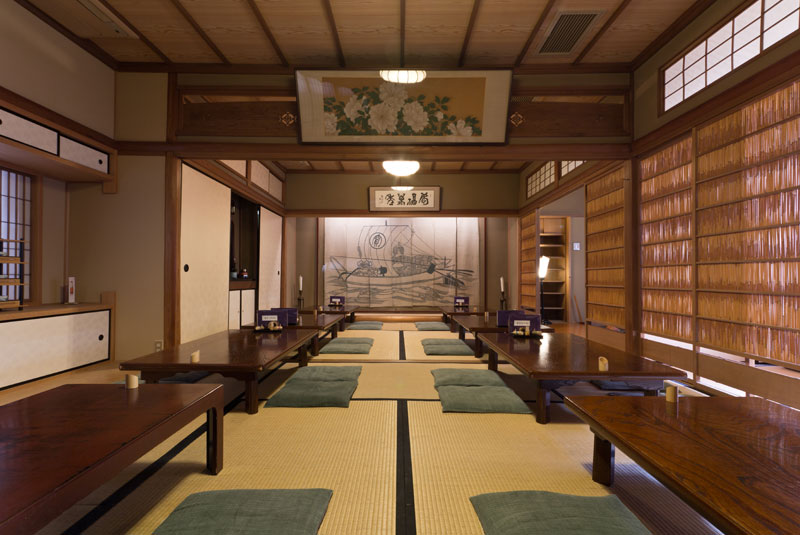 How are soba noodles made?

The process of making soba noodles takes about 20 minutes. Honke Owariya’s chefs – who must go through a minimum of three years’ training and as many as 10 to become soba masters – make a dough from buckwheat flour (80%), wheat flour (20%) and water, which is then rolled thin and folded into layers before being cut into noodles.

Honke Owariya can serve over 1,000 meals per day across its three Kyoto branches, so its noodles are both hand- and machine-made. Most importantly, they are prepared fresh every morning: “Soba noodles are very sensitive,” says Inaoka. “They need to be made fresh every day because once made, they’re only good for a couple of days.” 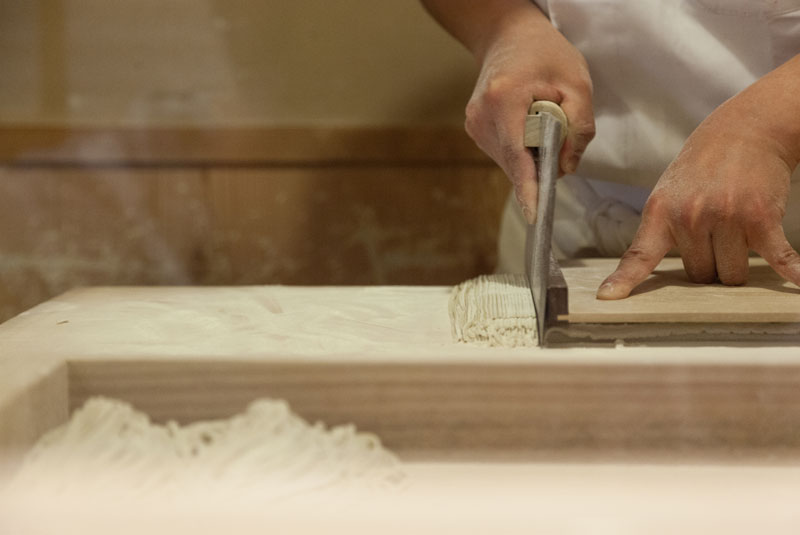 Soba noodles can be enjoyed both hot and cold. “In Kyoto, the most traditional way of eating soba noodles is seiro,” says Inaoka. “The plain buckwheat noodles are served cold with wasabi, Japanese green onions and a dipping sauce on the side, which is usually made with dashi and soy sauce. But they can also be eaten hot in a soup. This is called kake soba.”

Honke Owariya’s signature dish, called horai (treasure) soba, features five portions of cold buckwheat noodles presented in a special, layered box. They are served with wasabi and dipping sauces, as well as eight toppings: shiitake mushrooms, shredded omelette, sesame seeds, shrimp tempura, wasabi, nori (dried seaweed), Japanese green onions and grated daikon. “In this dish, you can eat the soba the classic way, but you can also put the toppings and the dashi, decorating each layer differently,” explains Inaoka. “This way, you can enjoy all the different tastes.”

When eating soba noodles, it is also imperative to slurp: “When you make a slurping sound, the dipping sauce and the noodles come together better, and it helps you enjoy all the flavours,” Inaoka highlights. 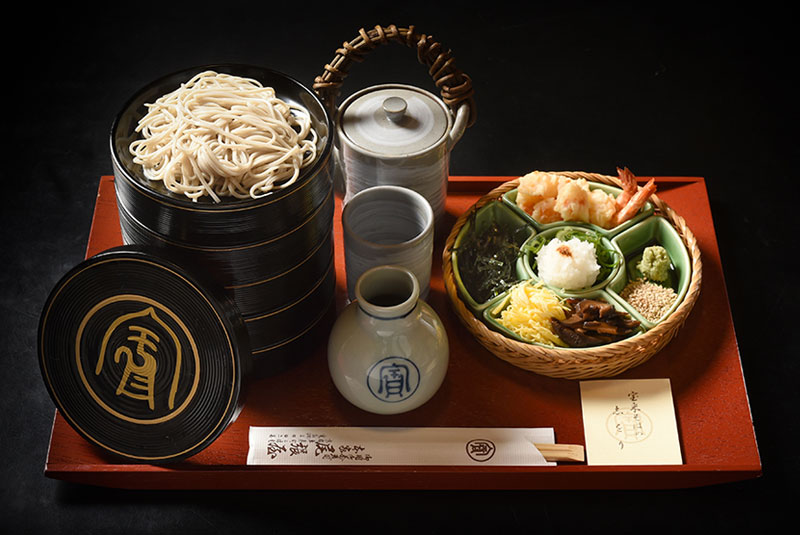 Although buckwheat noodles are at their peak flavour when eaten fresh, it is possible to find and buy dried soba that can easily be made at home – Honke Owariya even sells its own version with a dashi dipping sauce base, which will become available to buy from overseas with the launch of its new online shop in July 2021. But when choosing among different brands at a shop and cooking soba at home, Inaoka has a few tips.

“Take a look at the percentage of buckwheat to wheat flour in the ingredients,” she says. “You need to make sure that it’s high – the higher the better, but buckwheat should be at least 50%. You can also look at where the buckwheat comes from: the best flour comes from Hokkaido.”

Cooking the noodles is easy and quick: they are simply boiled in water for two and a half minutes. Inaoka recommends staying near the pot, as the water can sometimes make a foam and overflow. 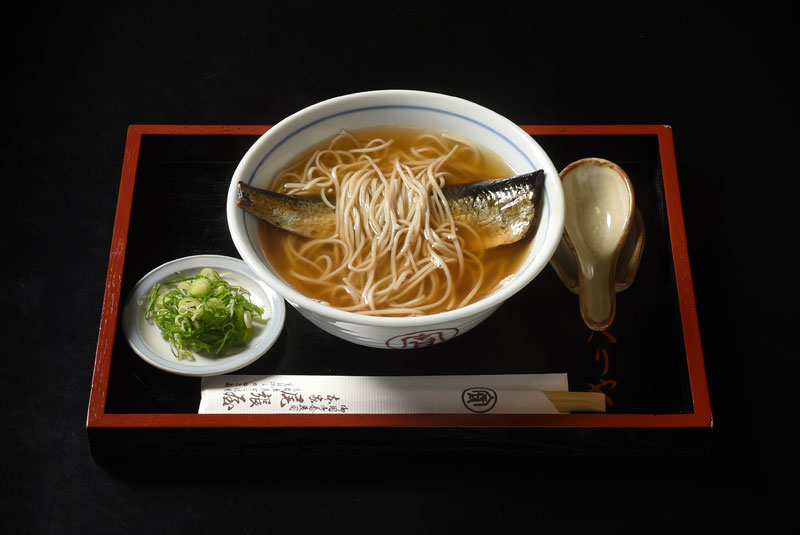 “After cooking, it’s important to wash the noodles with cold water,” she adds. “I always prepare an ice bath to put the noodles in. This ensures the best possible texture and a better flavour and smell of buckwheat. And with soba, if you overcook the noodles even by just one or two minutes, they get soft and start breaking. So it’s important to keep an eye on the time and to eat them quickly once they’re ready.”

Inaoka also recommends keeping the cooking water. Known as sobayu, it becomes cloudy and thick and can be mixed with leftover dipping sauce at the end of your meal to create a nutritious and tasty drink. You can also save the cooking water in the fridge, where it will keep well for about a week.

The future of soba noodles

As well as preserving the values of tradition and high quality that her ancestors passed on, Inaoka also has a few innovative ideas for soba and indeed for Honke Owariya. “I’m experimenting some different ways of cooking soba with my chef friends,” she says. “For instance, in Japan we eat pasta, but we cook it our own way, not only Italian style. I want to do the same with soba: we’re experimenting with things like olive oil, coriander and different spices.” 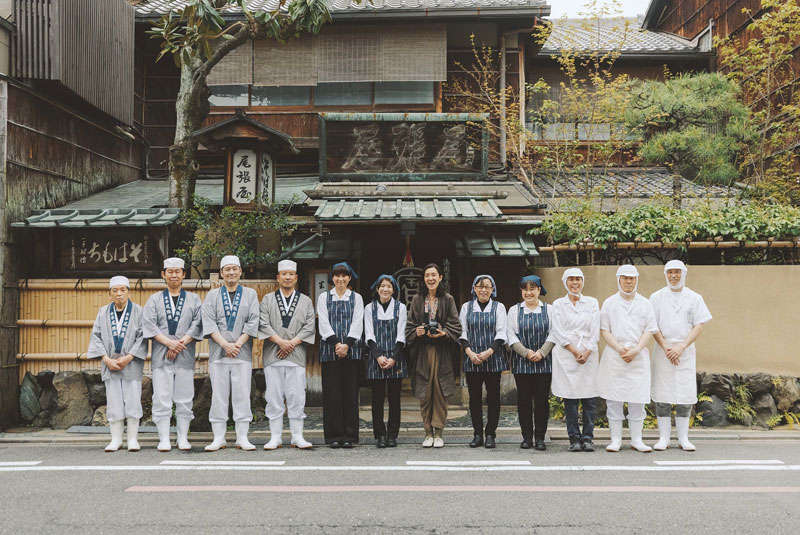 Ariko Inaoka and her team pose in front of Honke Owariya

The latest project she’s working on for the restaurant is all about sharing the culture of soba far and wide. “We’re working on a series of videos to show people how to make and cook soba,” she continues. “Right now, people cannot come to Japan, but what we can do is share stories. Hopefully, people will get inspired to learn more about Kyoto, and maybe visit one day.

“We’re also getting ready to sell our products overseas. Buckwheat noodles are healthy and easy to cook. I hope that one day soba becomes a famous and popular dish, so that people can enjoy it in all their different cultures.”

Honke Owariya was honoured in Essence of Asia, a collection of local hero establishments presented in association with S.Pellegrino & Acqua Panna as part of the Asia’s 50 Best Restaurants 2021 programme. Discover the full Essence of Asia collection in the article and follow 50 Best on Instagram, Facebook, Twitter and YouTube for the latest news, features and videos.