What does sustainability mean during a pandemic? The world’s most ecologically aware bar explains

Colombia’s Alquímico was given the Ketel One Sustainable Bar Award 2020 at The World’s 50 Best Bars virtual ceremony on 5th November. It was the first time the honour had been bestowed on a Latin American venue, while Alquímico’s position at No.47 also marked the debut for a Colombian bar on the list. 50 Best caught up with the bar’s owner Jean Trinh as he took a break from scouring Colombia’s northern territories for new producers and craftsmen to discuss his bar’s forward-thinking ideology

‘Sustainability’ is a word with an ever-increasing cultural currency in the global bar scene. For an issue that was rooted in sustainable product swaps – straws and coasters; plastics and glass; local produce and foreign ingredients – not so long ago, it is now understood on an altogether more macro level. Sure, it still encompasses ingredients, processes and physical materials employed in a bar’s programme, but it now also considers wider factors that include supply chain (and the processes of these suppliers), shipping, attitudes in the workplace, business models and the sustainability of people and their mental wellbeing.

The Ketel One Sustainable Bar Award is judged by Food Made Good Global, 50 Best’s sustainability audit partner for the past seven years. Bars are given the opportunity to apply to be considered for the award and are asked to complete a comprehensive questionnaire on their sustainability credentials. This year, the process was altered significantly to reflect the transformative nature of the pandemic, with an assessment of bars’ reactions to the Covid-19 crisis and work in the community factored into the results.

Alquímico, Colombia’s first venue on The World’s 50 Best Bars list, puts sustainability at the heart of every decision it makes. “A lot has happened to us here over the past couple of months and we’ve made some big changes,” says Jean Trinh, the French owner of the Cartagena bar on the country’s Caribbean coast. “We’ve moved the whole team to our farm in Filandia and made some big decisions that will hopefully define the future of our bar. Winning the Ketel One Sustainable Bar Award has been the best thing that could happen to us. It shows me and my team that what we are doing and the choices we are making are being recognised on a global level. It has also opened the door for Colombian bars on the 50 Best list and I hope ours is the first of many.”

The ‘big changes’ Trinh refers to affect his bar’s sustainability on every level. In early 2019, Alquímico acquired 25 acres of farmland in Filandia – the heart of Colombia’s fertile coffee-producing belt – to grow ingredients that would be used in the bar as part of a programme they called #FromTheBarToTheFarm. In March this year, when Trinh realised there would be little or no government support for his business and its staff, he took drastic action. He invited all 50 team members and their families to make the 900km journey to Filandia to live and work for as long as they needed to in order to ride the pandemic out. 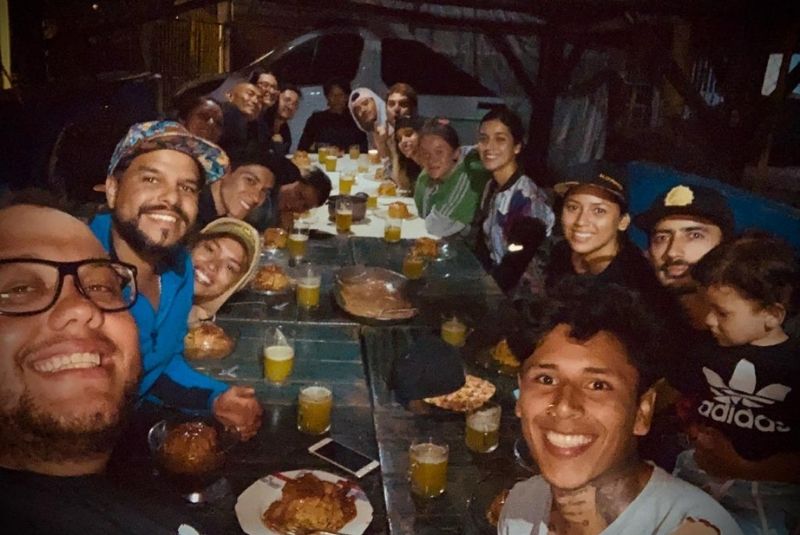 Twenty four staff chose to make the journey along with another two of their family members and three children. The Filandia smallholding they would move to had no housing; the team had no experience of farming – Trinh and co. have been learning on the job. “It all started with wanting to be able to explain to our guests the journey of the ingredients from seed to the cocktail,” begins Trinh. “When we bought the farmland, we first had to change its production. It was all about coffee, but we needed to change the growing processes to cultivate fruits and other ingredients. This was all going quite smoothly and we were seeing lots of excellent products arrive for us to use.

“Then the pandemic struck. Initially, I was paying the guys 100% of their wages and putting on 48 hours’ masterclasses per week for them to learn new skills. I couldn’t go on like that for more than a couple of months because we had zero government support and I would have gone bankrupt. I was speaking to my sister back in France one night and she suggested that I take everyone to the farm. Initially, I thought it was a ridiculous idea. But the more I considered it, I realised it could be an option to keep us all functioning together.”

Swapping shakers for sickles
On arrival in Filandia, there was no accommodation. The group split into two, with half managing the construction of their lodgings and the other learning about the cultivation methods employed to grow the crops. They learnt carpentry, electrical engineering, masonry, roofing, permaculture, fertilizer production and crop rotation – a far cry from shaking and stirring, but all essential in order to make the farm concept work as a viable project. 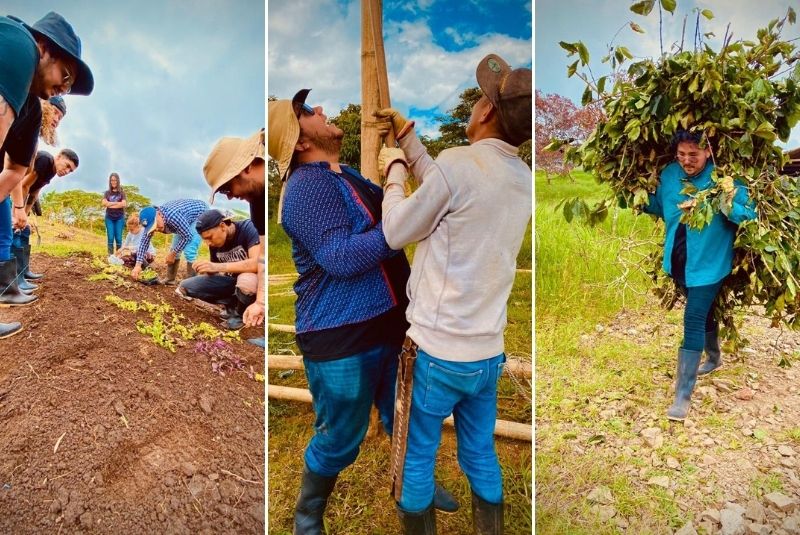 The bartenders had to learn farming skills quickly

“It was amazing to see how everyone reacted,” says Trinh. “I started seeing team members in a completely different way and saw sides to their personalities I didn’t know existed. What started as something to keep us alive has become a way of life. It will be part of our memories for a very long time.”

Aside from the farm and the home it has created, Alquímico’s sustainable credentials are second to none. During quarantine they worked with two restaurants and two foundations in Cartagena to set up Mercado Solidario (Solidarity Market), through which they delivered 200 daily food bags to families affected by the crisis. Before the pandemic, the team started a bee farm with 130,000 bees producing organic honey in order to protect the endangered Colombian honeybee. A reforestation project has seen them plant 6,000 native trees and their work in renewables has seen them reduce energy costs by 60%. 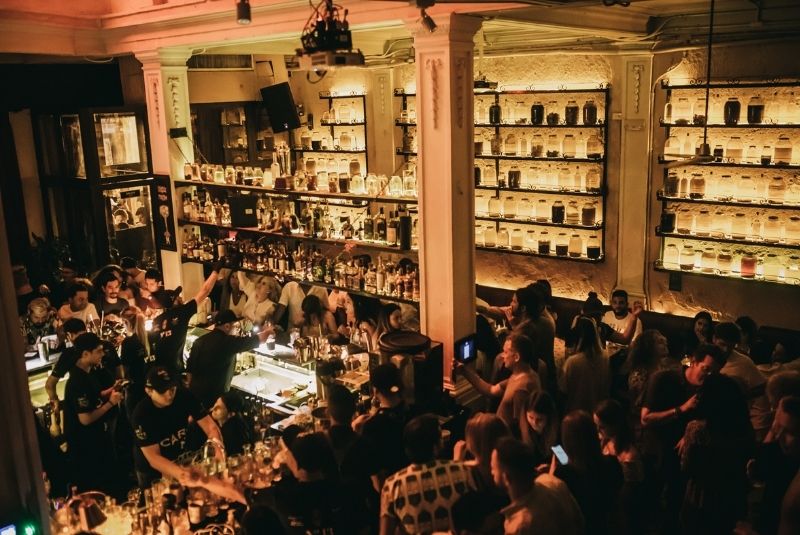 Trinh himself has a semi-traditional path to bar ownership. While studying civil engineering at university in Paris, he and a group of friends opened a small bar called El Cartel. After schooling, he travelled South America extensively, living in Mexico between 2004 and 2007. “In 2013 I decided that I wanted to live in Latin America,” explains Trinh. “I felt at home here. The people are amazing and Colombia is a beautiful country. I thought I would give it a year and see how I got on. If the bar business didn’t work out, I would get a job in engineering.

“Cartagena was perfect. It has a lot of tourists and a lot of open-minded people. I found a small neighbourhood I liked the look of and a beautiful old colonial house, so I opened Laboratorio, a pop-up style bar I had been imagining since leaving France. I only had 7,000 euros in my pocket, but the success was brilliant. After a year, they offered me a five-year lease but I said ‘no’ as I wanted to move into the old town, which would mean more international clients and fewer backpackers. I found another beautiful republican house and initially took over the ground floor with six members of staff. After the first two years, we had grown in sales by 100% each year and I reinvested everything.” 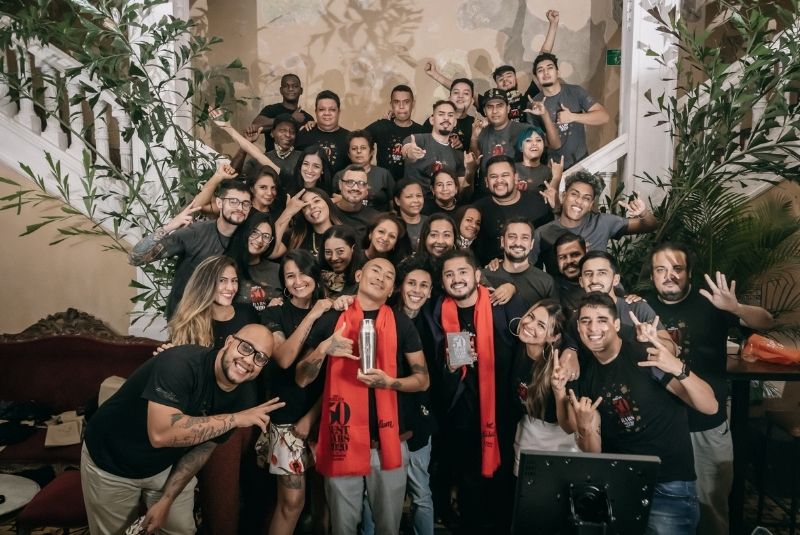 After year one, Alquímico took over the building’s first floor in addition to the ground, where it opened a kitchen and games space. After two years it opened its rooftop which, until the point of the pandemic, was one of the best nightspots in the city. “The ground floor’s menu is like a journey around Colombia and its native ingredients with lots of spirits infused with native herbs and indigenous ingredients. On the second floor we focus on Colombian food and the rooftop is all about the party. We are a high-volume bar with strong sustainable principles,” concludes Trinh.

Sustainability of people, maintaining local ecosystems and setting the standards for ingredient-sourcing for bars all over the world. Alquímico is a worthy winner of the Ketel One Sustainable Bar Award 2020.