Ahead of the announcement of The Ferrari Trento Art of Hospitality Award 2017, we find out how the accolade helped motivate the team behind last year’s winner, Eleven Madison Park.

When a restaurant receives an award for the best hospitality in the world, it’s hard to imagine how it might improve its service. But that’s exactly the effect that winning The Ferrari Trento Art of Hospitality Award had on Eleven Madison Park in New York.

Will Guidara, co-owner and restaurateur of the establishment ranked at No.3 in The World’s 50 Best Restaurants, says winning the accolade last June was a career highlight that spurred his dining room team to be even better.

“There are so many awards for chefs and there are restaurant awards for elements we share together, but service and hospitality is our passion and our craft – it’s the thing that we give our lives to,” says Guidara. “It’s where I fill my gas tank, pursuing that side of Eleven Madison Park, so it’s hard to explain how powerful it was for our team just to be acknowledged for it.”

Guidara’s leading hospitality style is recognised in the industry as one of the best in the world but this award, introduced last year, was the first accolade to acknowledge it. Voted by the 1,040 Academy members who create The World’s 50 Best Restaurants list, the award was a recognition by global chefs, restaurateurs, food critics and gastronomes of the restaurant’s uniquely warm and flexible front-of-house service. 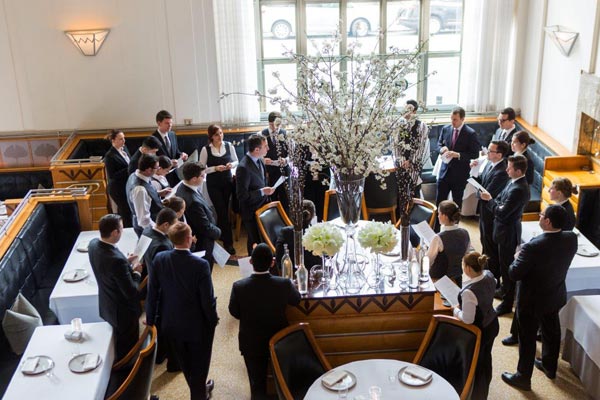 Will Guidara briefs the dining room at Eleven Madison Park


Hospitality at Eleven Madison Park takes on many forms. From the welcome at the start of the meal to tableside theatrics and beautifully presented dishes, there are multiple elements that come together to create a memorable dining experience. But perhaps the most uniquely Eleven Madison Park touch is the creation of bespoke dishes for individual diners: Guidara and his army of amiable wait staff listen out for clues in diners’ conversations before surprising them with little touches and unexpected additions to their menu. There is also an element of choice in the tasting menu, allowing customers to pick and choose their favourite courses from co-owner and chef Daniel Humm’s tasting menu.

Humm and Guidara bought the restaurant from Danny Meyer’s Union Square Hospitality Group in 2011 but in total they’ve been running it together for 11 years – and now it’s time for a change. Eleven Madison Park will close for refurbishment in June, reopening in September with a brand new kitchen and a dining room that Guidara says will be even more inviting and conducive to great hospitality. In the interim, they’ll run a much more casual pop-up called Eleven Madison Park Summer House in the Hamptons.

While there are great things to come, Guidara says the hospitality award has given his team the impetus to provide even better service.

“Affirmation is a really beautiful thing,” he says. “We don’t do it for the affirmation, but it gives you the motivation to dig that much deeper. It energises you every single day as you step onto that floor.”

The Ferrari Trento Art of Hospitality Award 2017 will be announced at The World’s 50 Best Restaurants ceremony on Wednesday 5th April. Watch the livestream and follow the countdown on Twitter, Instagram and Facebook from 8pm Melbourne time.

Now find out why Osteria Francescana’s Massimo Bottura says great hospitality is the key to success.