Thunderbolt, the new bar on the block in downtown Los Angeles, has rocketed onto the world stage. The winner of the Campari One To Watch award at The World’s 50 Best Bars 2021 is a new entry to the 51-100 extended list placing at No.61. Thunderbolt’s owner-bartender Mike Capoferri tells 50 Best about his fascination with Madeira, why he creates his Martini with a centrifuge and how he has received this recognition without spending one dime on PR or marketing

Born and raised in Atlanta, Georgia, Mike Capoferri began his bartending career after college and he relocated to the US west coast. While he has found a happy home in Los Angeles, he has made a vow not to forget his roots. Thunderbolt – his latest venture and winner of this year’s Campari One To Watch Award at The World’s 50 Best Bars 2021 – exudes natural southern charm.

The bar itself and one of its signature cocktails, the Tart Cherry Thunderbolt, made with overproof Jamaican rum, tart cherries and mint are both eponymously named after a small community in Georgia near Capoferri’s hometown.  “I wanted to open a bar with a southern flair and to turn some of the flavours that I grew up with into drink format,” he says. “I've always lived by the motto that ‘you don't try to shoehorn a concept into a space’ and it was a perfect fit – they even have a barbecue joint next door.”

Located in Los Angeles’ Filipinotown, home to a vibey and up-and-coming bar scene, in 2020 Thunderbolt was welcomed to the neighbourhood with open arms, just months before the outbreak of the pandemic. 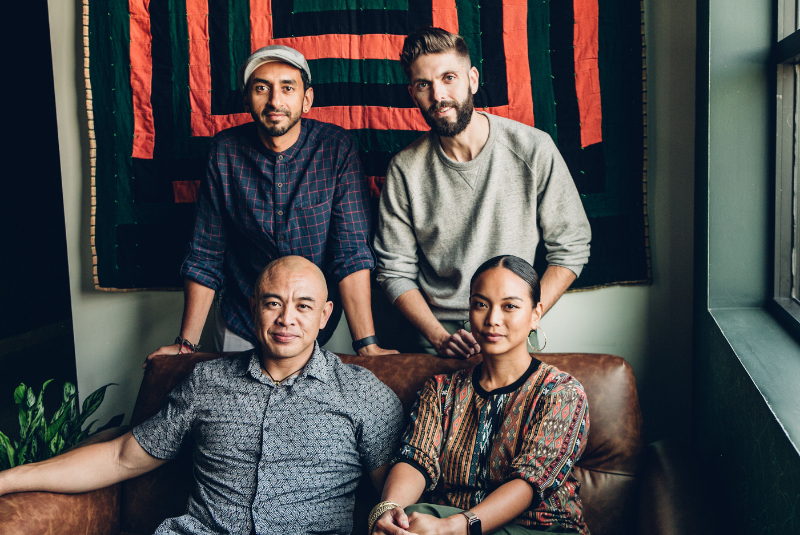 “The community in LA is especially tight-knit. We don’t have a competitive bar culture and everyone commiserates and works together. We reacted to Covid by saying, ‘let's dig in, let's support the neighbourhood, let's feed out-of-work hospitality [workers],’ which I think is one of the reasons our community has really taken to us,” reflects Capoferri.

Instead of closing the bar, Capoferri and his team rallied to fundraise, host Covid-safe remote events and to “feed a lot of people. We did around 20 pop-ups during Covid with to-go food and drinks, featuring chefs whose restaurants had closed or bartenders who were out of work,” he says.

The bar began with a 10-cocktail menu, focussing specifically on the golden, peachy flavours of southern USA. With the outbreak of Covid, however, this carefully laid plan was not to last. “With the pandemic, we were forced to get creative because we were no longer a bar, but almost a ‘to-go factory’,” says Capoferri. “The menu that was supposed to last forever went out the window.”

An eternal optimist, he reflects on the positive outcomes of this dramatic change: “I had a joke with our general manager, Cameron [Robertson], that we had to come up with a brilliant idea every week. Now, we have new cocktails happening all the time and we’ve been forced to expand our techniques, our repertoire of equipment and our realm of flavours.”

Currently all day, guests are welcome to sit and enjoy Thunderbolt’s relaxed atmosphere and minimalist but comfortable décor. “We’re a neighbourhood bar, so we try to keep it casual but classic,” says Capoferri. “Our drinks are meant to be very approachable, unintimidating and affordable." 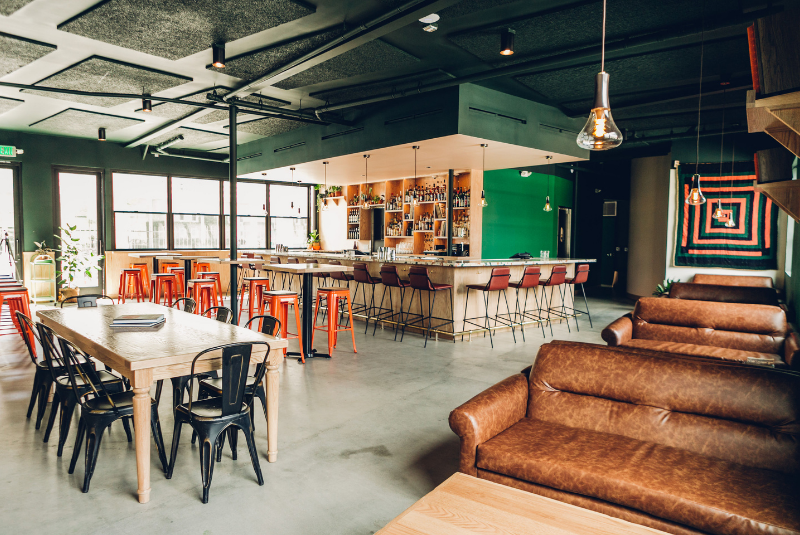 While calm on the surface, this laid-back approach does not extend to Thunderbolt’s cocktail ideation process. It’s characterised by a flurry of activity, creativity and innovation behind the scenes: “My brain lives in the ‘advance through science’ realm,” says Capoferri. “A lot of our cocktails are quick to serve, but the process of getting the right quality takes a long time.”

At first glance the Liquid Picnic, a fragrant concoction of gin, citrus, tomato, rosemary and black pepper (‘reads like a salad, drinks like a Martini’), may sound easy to whip up, but around 12 hours’ work goes into its preparation. Instead of using ice to stir and dilute as in a classic Martini, the Thunderbolt team clarifies tomato water in a centrifuge. “This gives it a clear, very umami-focussed flavour and far better mouthfeel than water,” explains Capoferri. The cocktail is then stored in custom a refrigeration unit at -6 degrees Celsius (20 degrees Fahrenheit) – just above its freezing point. When ready to serve, the Liquid Picnic is poured into a frozen glass and garnished with a dash of lemon oil to create its perfect serve.

“So, when the customer sits down, that 12-hour preparation turns into about a 10-second process,” Capoferri explains. “Everything we do makes the drink more delicious, more consistent, but also more affordable. Our tech isn’t used for pomp and circumstance. It’s not a show. We try to use it in a way that allows us to produce our cocktails without charging 18 or 20 dollars for one drink.” 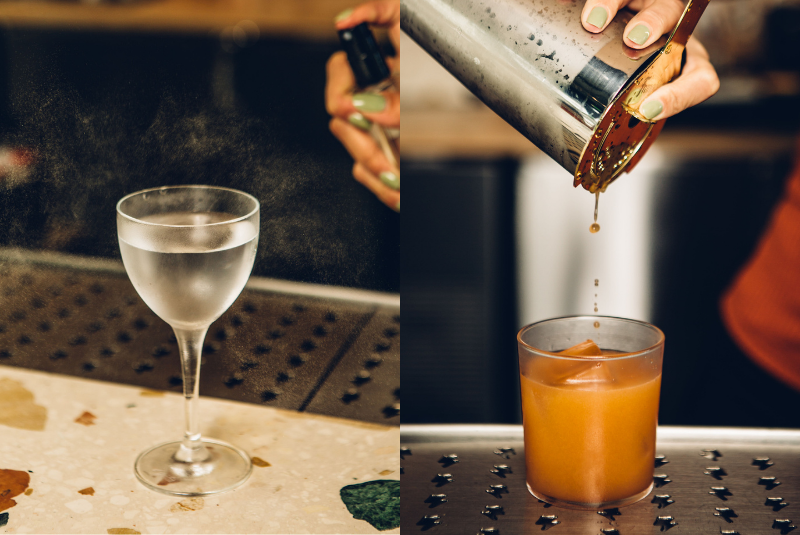 Two of Thunderbolt's cocktails: Liquid Picnic (a take on a classic Martini) and La Frutera

One of the more curious assets at Thunderbolt is the extensive selection of Madeira, the fortified wine produced on the island off the Portuguese coast. Capoferri puts on his ‘historian’s hat’ to explain the luxury beverage’s connection with the Deep South, which spans back to the late 1600s. “Madeira was the first wine in southern USA. Ships travelled from Europe filled with mundane table wines, but the extreme temperature changes during the several-month-long journey transformed them into a beautiful, stabilised and oxidised alcohol. It’s fun to bring that story forward and taste some history.”

The most recent iteration of Thunderbolt’s cocktail menu is particularly special, as each bartender now has a drink that they conceptualised and for which they designed the technique. A proud leader of his solicitous and dedicated team, Capoferri says, “we work with hyper-creative, incredibly talented bartenders. I believe everyone should have a say and it’s much more fun if you’re invested in the menu.” 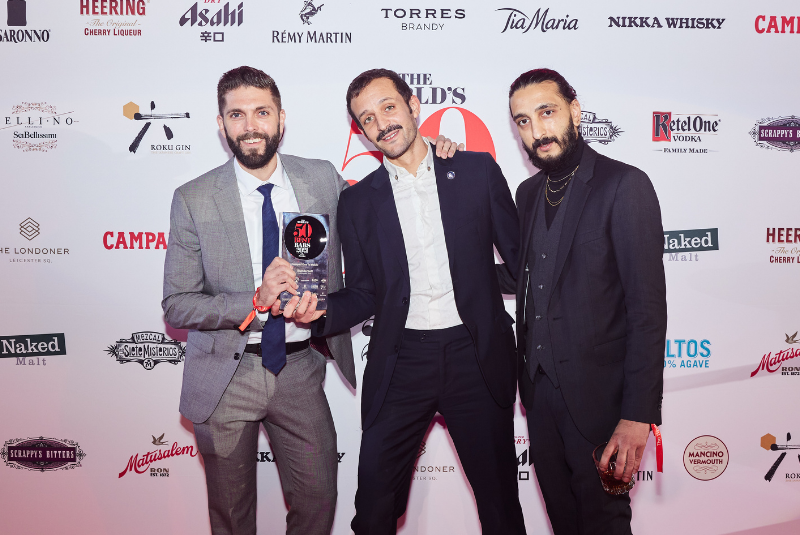 Acknowledging his Campari One To Watch award win, Capoferri looks to his staff: “it’s hugely welcome recognition for the team for sticking it out, especially with all they’ve dealt with during Covid.”

“We’re just this little neighbourhood bar, who haven’t spent $1 on PR and bargain for all our furniture. To be included on this list of bars is just a huge honour,” says Capoferri. “It makes us set our sights on moving up the list and continuing to be loud about all the great things we’re doing over here.”

Catch up on everything that happened at The World's 50 Best Bars 2021:
The 13th edition of The World’s 50 Best Bars was announced on Tuesday, 7th December, 2021 at a live awards ceremony in London. To stay up to date with all news and announcements, browse the website and follow us on Facebook, Instagram, Twitter and YouTube.