Freshly minted as the winner of the American Express One To Watch Award 2022, AM par Alexandre Mazzia is wowing diners and critics by offering a genuinely original culinary experience. Find out why it has been selected by The World’s 50 Best Restaurants organisation as the destination du jour

Located in the southern French metropolis of Marseille, AM par Alexandre Mazzia is an atypical fine dining restaurant, helmed by an unusual chef. With just 22 seats, this diminutive establishment is building a gargantuan reputation – in its home country and now beyond on the international stage. Mazzia’s vegetable- and seafood-led menu is the result of myriad global influences and flavours, delivered with precision and an element of poetry, in an intimate setting.

Here are eight factors, largely expressed in the chef’s own words, that encapsulate what makes this place so special.

1. Marseille
Mazzia moved to Marseille in 2010 and never left. In 2014 he opened AM par Alexandre Mazzia in a residential part of the industrial port city that is more known for its hearty seafood fare – it is the home of bouillabaisse, after all – than its fine dining pedigree. But the spirit of Marseille, which is France’s second most populous city, lies at the heart of Mazzia’s cuisine. “My cooking is influenced by Marseille’s cosmopolitan side, the sea, the fishermen’s catch, the spices. Marseille is equally light-hearted, complex, and timeless,” he says. “It is important to me because of its lights, its sounds, its smells. I think the sea has guided my soul.” 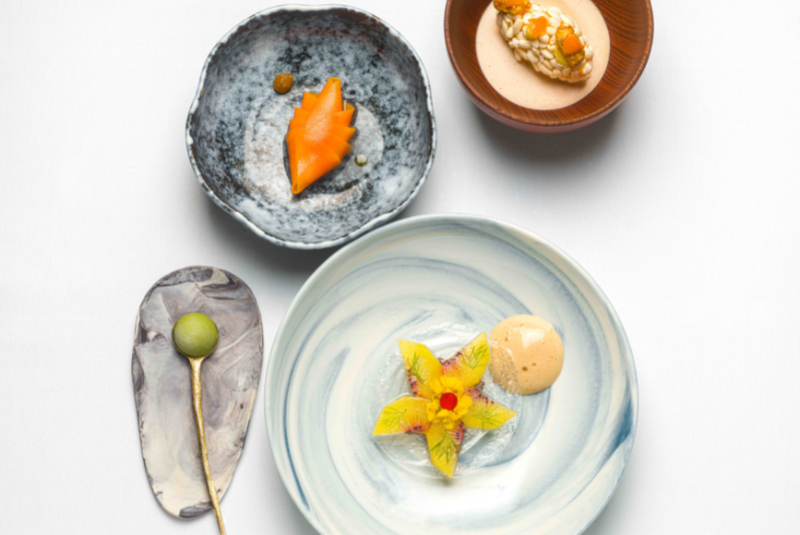 2. Basketball
As a teenager, Mazzia was a basketball prodigy, playing for the French national junior side before the pull of the kitchen overtook his sporting ambition. He asserts that these early experiences have been invaluable in his adult career. “I played for the national team at the same time as my apprenticeship in the kitchen. This helped me a lot in terms of management and performance because when one is put in positions of responsibility, sometimes there is what others call pressure – but that’s something I like. It's a bit like having the ball in your hands to try to score in the last few seconds of a game. Actually, that's kind of what we do every night [during service in the restaurant].”

Similarly, he sees parallels between sports and cooking in terms of the teamwork required, and how to get the best from people. “Sport taught me the values ​​of altruism, performance and working with teammates. I can better identify a person's attitude to pressure and their performance… it is a real advantage to notice if a person is in difficulty in order to be able to help them. The collective takes precedence over the individual.”

3. Boarding pass, please...
“The guests choose their voyage: a boarding pass instead of a menu,” says the 46-year-old chef. In practical terms, this means diners can select a short, medium or longer menu, but without knowledge of the dishes to come. Indeed, each individual guest’s menu may differ from another’s, even those on the same table, depending on the availability of produce from that day’s catch and from the farmers’ delivery in the morning (as well as catering to taste preferences and dietary requirements).

There are only seven tables, with an open kitchen, allowing for an intimate ménage à trois between guest, kitchen and dining room. “The service is elegant, our waiters are storytellers,” adds Mazzia. “The rule is that there are no rules, but at the same time it is very precise.” 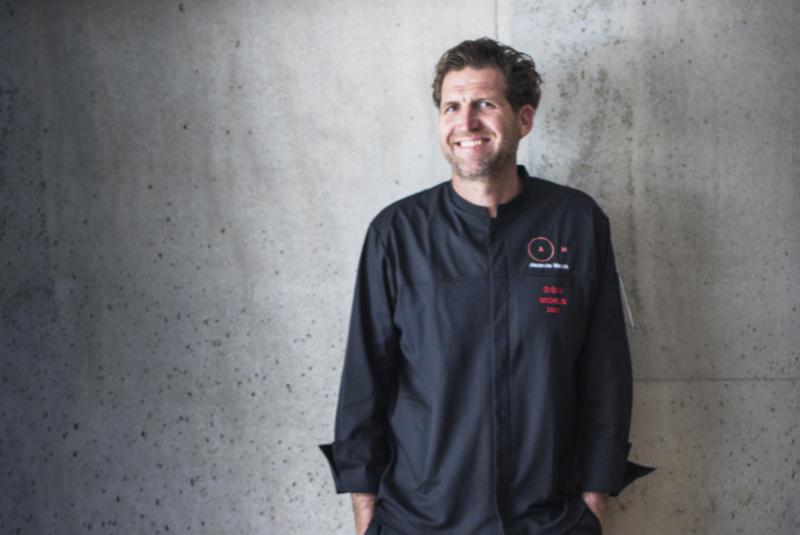 4. Joan Miró
Mazzia is nothing if not artistic in his approach, and particularly admires fellow French chefs-artists such a Michel Guérard and Pierre Gagnaire. But it’s the Catalan painter Joan Miró who perhaps best matches his philosophy. “Miró speaks to me a lot. He had in his work a form of evolution, compared to the beginning and end of his painting, and in light of the historical, cultural and social context.”

5. African smoke and spice
The African continent is responsible for a double influence on the cooking at AM par Alexandre Mazzia: first, as a result of the chef’s childhood in Central Africa, and second, due to Marseille’s historic role as a gateway from North Africa into Europe. “I was born in Congo, where I lived for 14 years facing the Côte Sauvage,” says Mazzia. “There was a small fishing port there and its scents have inevitably left their marks on me… the barbecue, the smokey aromas, the peppers.”

Roasting, spices and chilis – and the juxtaposition between them – are part of the DNA of the restaurant’s cuisine. “The influences of North Africa and Central Africa also feed my spirit.” 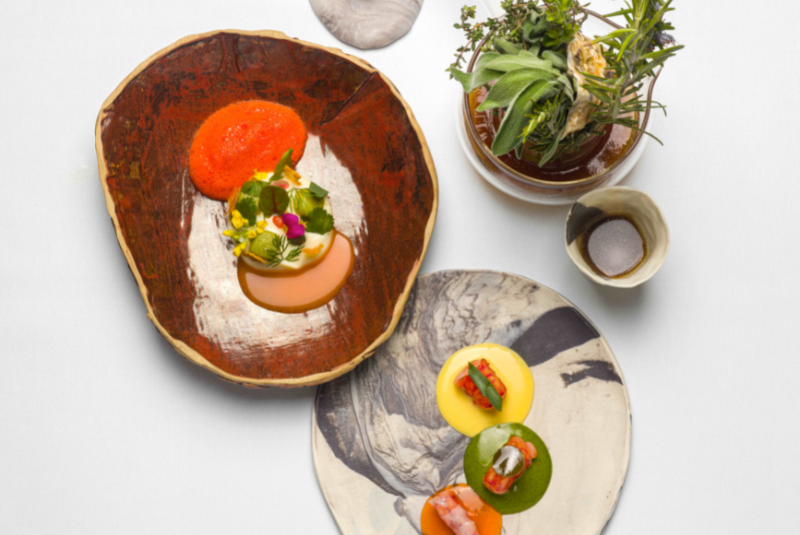 Dishes at AM are influenced by the chef’s childhood in the Democratic Republic of Congo (image: Yam Magazine/Philippe Vaures Santamaria)

6. Sequences and frequencies
Dining at AM is designed stimulate the emotions and, ideally, take you on an emotional journey. The menu is structured into a number of ‘sequences’ – each of a group of complementary dishes that are served simultaneously and form part of the overarching culinary narrative. Within each sequence there are ‘frequencies’ – seven or eight elements around a main idea. Mazzia is adamant that there is no signature dish, but he concedes that the smoked eel with chocolate allows one to better understand the restaurant’s universe in a single bite.

7. Bridges (not pairings)
When it comes to drinks, don’t expect the classic wine list of a three-Michelin-starred French restaurant. The beverage programme at AM is not driven by pairings, but rather by exploring drinks that link the dish sequences together; this might include tea, sake, champagne and wines. “Sake, with which we work a lot, sublimates the dishes. Champagne is important because it is celebratory. Champagne, with its bubbles, is more appropriate [for the cuisine] because of its freshness, its tension, and it allows us to make bridges between sequences,” explains Mazzia. Nonetheless, wine remains part of the story “because we are in France!”

8. Alexandre Mazzia
The chef leading the new American Express One To Watch is a maverick; some say a genius. He is the sole owner of the business (“I started with €20 in my bank account and I bought the space myself”) and, if he is not there, the restaurant does not open. “I wanted a place small enough that I can think I have control over everything, even though I don’t!”  he says with a characteristic self-awareness that balances his intellectualisation of gastronomy.

He is quick to credit his team, many of whom have been with him since opening, or even longer, but ultimately the clue is in the name: AM par Alexandre Mazzia is a singular, distinct and brilliant restaurant created in the image of its maker.

AM par Alexandre Mazzia will officially receive the American Express One To Watch accolade on Monday 18th July at the awards ceremony for The World's 50 Best Restaurants 2022, sponsored by S.Pellegrino & Acqua Panna, in London. To be the first to hear about the latest news and announcements from The World's 50 Best Restaurants, join the community on Instagram, Facebook, Twitter and YouTube.