Deliciously progressive Israeli plates with a focus on reducing waste

Raz Rahav is one of Tel Aviv’s most promising young chefs at the epicentre of a wave of progress in modern Israeli gastronomy. First gaining notoriety on social media for his meticulously well-presented plates, he opened OCD to materialise his vision of progressive Israeli cooking. Drawing inspiration from pan-Jewish traditional cooking and the cuisines of the Mediterranean, he utilises Israel’s extensive pantry to deliver a memorable and unique dining experience that is wholly grounded in sustainability.

Seating just 19 people at the counter overlooking the open kitchen, adorned by raw concrete walls and neo-industrial open pipework, OCD uses its minimal covers to maximise its eco-focused philosophy. There's no menu available: instead, diners are to relinquish control to the kitchen, which embarks them on a guided tour of modern Israeli cooking through 16 to 20 courses, where each dish creatively utilises produce often overlooked or discarded.

The fibrous stalks of asparagus that would be readily cast out in other kitchens are welcomed here with open arms, to be cured in sugar and transformed into a deceptive dessert. Unripe apricots are fermented into a sourdough loaf, served alongside a hot sauce also made from the fruit. For Rahav, there is no vegetable too small, fruit too misshapen or offcut too difficult to cook.

Dishes such as the trout three ways, with the fish coming from Kibbutz Dan in the north of the country, show that it’s possible to ensure that no element is wasted. Where the back of the fish is delicately grilled over citrus charcoals and placed in a spicy black raspberry cream, the belly is combined with aubergine into crispy croquettes, topped by a delicate tataki of the flesh and basil flowers.

Throughout the meal, guests are encouraged to walk around and take a closer peek into the action, ask questions and build a deeper understanding of the plates that are soon to arrive in front of them. Education for diners about each dish – its origins, influences and cultural impact – is just as much of a priority for Rahav as their creation.

Bagging the Sustainable Restaurant Award 2023, sponsored by Arla Pro, OCD Restaurant is working proof that the pursuit of fine gastronomy doesn’t have to be wasteful.

The Sustainable Restaurant Award is given to the restaurant that achieves the highest environmental and social responsibility rating as determined by 50 Best’s audit partner, the Sustainable Restaurant Association. All restaurants on the Middle East & North Africa’s 50 Best Restaurants list were invited to enter the award via self-nomination and each entry was assessed across three main pillars: sourcing, society and environment. 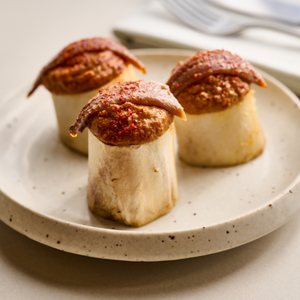