David Thompson – chef, restaurateur, raconteur, mentor and inspiration – prefers to be known simply as a cook. But the recipient of the 2016 Diners Club Lifetime Achievement Award for Asia has achieved much in an extraordinary globe-trotting 30-year career.

Here he takes a moment away from wok-jockeying to reflect on past, present and future.

A lot of my discipline and motivation is internal; it’s about doing something that has some credibility and worth, as far as I understand it. It is probably because I’m not Thai that I pursue authenticity with the zeal of a convert.

When I was 21 or 22 in Sydney, a genetic time-bomb went off and I just had to cook. I was insatiable, ravenous, avid. I tried to cook all these French dishes, pretty badly at first, but I gradually learnt.

On my first visit to Thailand, I was seduced by the country, the culture, and some of the cooking – but I had a dilettante’s understanding of Thai food. The place, however, was interesting and charming; chaotic and incomprehensible too, with no logic, but it had an insouciance that I found agreeable.

Opening Nahm in Bangkok was the biggest challenge – like opening in the culinary Vatican. It was not without controversy.

This accolade has given me cause to reflect, which is not something I usually do, and wonder, ‘Where did it all go?!’ While I am always slightly embarrassed by awards, receiving something as significant as this, voted for by my peers in the industry, does make me proud.

The one thing that Nahm has never tried to do – whether in London or Bangkok – is to cater to what the customer likes or expects. My first priority there has always been to be faithful to a cuisine in order for people to be aware of what Thai food is and can be. 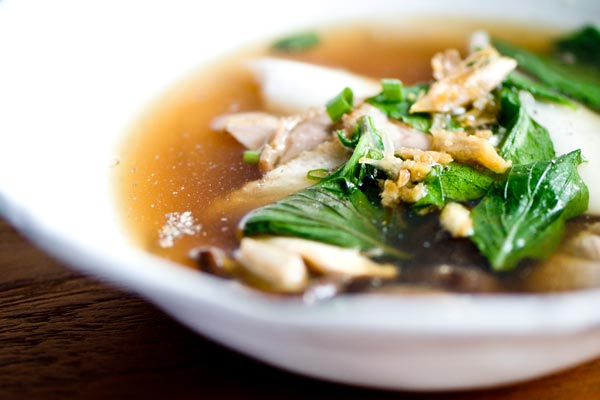 Long Chim is full of dishes that Nahm would never deign to have on its menu. We have pad Thai, we have green chicken curry. It’s populist and extremely busy, which is good because it’s a financial enterprise – my pension plan.

I still have the same innocent joy in cooking for its own sake – the timeless pleasure that I had when I started out, which makes me terribly lucky. I’m still a craftsman and a cook, rather than a chef or restaurateur, I suppose.

Here’s why you should never have such lofty aspirations: I now find myself cooking stir fry noodles because it’s the most difficult dish in the Long Chim repertoire and every man and his dog is ordering it. So from being a grand chef who used to look disdainfully upon the commonplace, I now find myself cooking 50 pad Thais a night as a wok jockey! I’m paying off karmic debt.

Nahm remains extremely important to me. Just now I was working with Prin [Polsuk, Nahm head chef] putting on a few changes at the restaurant.

I’m 55 and my feet hurt a bit. Being a chef is like being a Bulgarian opera singer, if you’re going to last the distance you need sensible shoes.

I’d like to see Odette by the wonderful Julien Royer in Singapore make it onto the Asia’s 50 Best Restaurants list. There’s also a restaurant in Hong Kong from the chef Hideaki Sato [Ta Vie] that’s pretty special.

I was about to retire, but now I’ve got this award– no way! I’ll show you b*stards that I’m not dead yet.

Find out Chef David's reaction to winning the award:


Now see what happened when David opened the doors of Long Chim to the chefs of Asia's 50 Best Restaurants:

Find out the new list of Asia's 50 Best Restaurants 2016 on Monday 29th February – tune in for the live countdown on Twitter and watch the livestream from 8pm Bangkok time (GMT+7).