For the second year, 50 Best and Banco Bilbao Vizcaya Argentaria (BBVA) have joined forces to launch a scholarship scheme that will provide an aspiring cook with a once-in-a-lifetime opportunity to gain experience at three restaurants in the 50 Best family, by undertaking six-week stages in the kitchens of restaurants Odette, Core by Clare Smyth and Quintonil. Entries to the 2019 scholarship open today.

The 2019 edition of the 50 Best BBVA Scholarship, an initiative to promote emerging culinary talent and nurture the next generation of chefs, launches today with entries open until Wednesday 19th December 2018. Following a successful first year, the 2019 scholarship has grown, with the winner set to work alongside three of the world’s best chefs over a period of 18 weeks.

In a series of six-week stages between June and November, the winner of the 50 Best BBVA Scholarship 2019 will gain experience at restaurant Odette in Singapore, led by French chef Julien Royer and ranked No.28 in The World’s 50 Best Restaurants 2018; followed by an internship in the kitchen of Core by Clare Smyth in London, UK, with the elit® Vodka World’s Best Female Chef Award winner Clare Smyth; and finally at Quintonil in Mexico City, the forward-thinking restaurant led by chef Jorge Vallejo and co-owner Alejandra Flores.

Many of the world’s leading chefs started their careers by doing stages, which give aspiring cooks an opportunity to train in professional kitchens, develop their culinary skills and be exposed to new techniques and cuisines. Smyth, who opened her restaurant Core by Clare Smyth in 2017, said: “‘When I was starting out in my career I had the opportunity to learn from some of the best chefs in the world and that experience was invaluable. I believe it is important to help inspire and support the next generation of chefs through initiatives such as the 50 Best BBVA Scholarship, so that our industry continues to evolve and flourish.”

Prior to embarking on the 18-week period of kitchen stages, the winner will receive complimentary tickets and flights to attend The World’s 50 Best Restaurants 2019 awards ceremony in Singapore, in order to receive the scholarship prize on stage in front of the world’s most accomplished chefs, international media and food lovers from across the world. 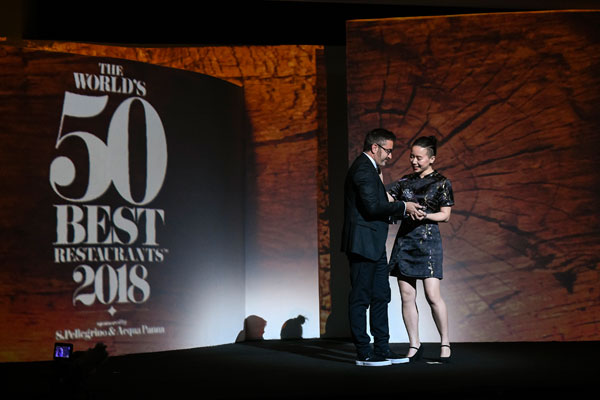 In order to be eligible to win the scholarship, entrants must have less than three years’ experience in a professional kitchen. The scholarship is also open to ambitious culinary students over the age of 18. Applicants can be based anywhere in the world and the winner will be selected via a three-stage judging process led by the 50 Best team and BBVA representatives, with input from host chefs Julien Royer, Clare Smyth and Jorge Vallejo.

The application process will include written and video submissions as well as a live interview, and applications are open now on the 50 Best BBVA Scholarship portal. The winner of the scholarship will also receive complimentary flights to each of the restaurants and a £500 cash prize per six-week stage in order to support themselves during this period. The two runners-up for the scholarship will also be given the opportunity to intern at a restaurant in their region. The full list of terms and conditions can be found on the entry website.

The  2018 recipient, 25-year-old Taiwanese chef Jessie Liu, was selected after over 1,000 applications were received from 82 countries. Liu accepted the inaugural prize at The World’s 50 Best Restaurants 2018 awards ceremony in Bilbao, where she met many of her culinary idols. She then undertook a stage at restaurant Mugaritz near San Sebastian in Spain, followed by a period of learning alongside award-winning chef Dominique Crenn at her restaurant, Atelier Crenn, in San Francisco, US.

Liu said of the experience: “This is the best opportunity for a young chef to learn, to see the world and meet amazing people in the same industry. The three-month experience is pretty intense and not for the faint-hearted, but you’ll be rewarded with unforgettable adventures, badass friends, tasty food, culinary knowledge, and so many good stories to share. Trust me, you’ll have the time of your life!”