What will be on the menu at the restaurant of the future? Tune in to #50BestTalks to find out

On the second day of the 50 Best Recovery Summit, a panel of international chefs including Clare Smyth, Julien Royer, Camilla Marcus and Garima Arora will discuss how the extraordinary events of 2020 are influencing and shaping what we’re eating. Register now to watch the latest edition of #50BestTalks, presented by Miele, on Wednesday, 14 October from 3pm UK time

Novel culinary outlooks, the rise of home cooking, innovative restaurant concepts and the role of food in a pandemic are just a few of the themes that will be up for discussion at the next edition of the thought-leadership forum #50BestTalks, presented by Miele. On Wednesday, 14 October, four luminaries of the food world will tackle the theme of ‘Rewriting the Menu’ for a more equitable, post-pandemic restaurant world in a virtual event that will include a chance for viewers to submit their own questions to the participants.

Featuring internationally renowned chefs Clare Smyth of Core by Clare Smyth in London; Julien Royer of Odette in Singapore; Garima Arora of Gaa in Bangkok; and Camilla Marcus of West~bourne in New York, the very first all-virtual edition of #50BestTalks will be free to watch for all, anywhere in the world. Anyone interested in watching the inspiring debate and taking part in the live Q&A session with the chefs is invited to pre-register now on the event page.

#50BestTalks: Rewriting the Menu, part of the overall 50 Best Recovery Summit, will be livestreamed on a dedicated digital platform on Wednesday, 14 October from 3-4pm UK time. Make sure to register now to receive reminders before the event goes live, and get to know the speakers ahead of the event: 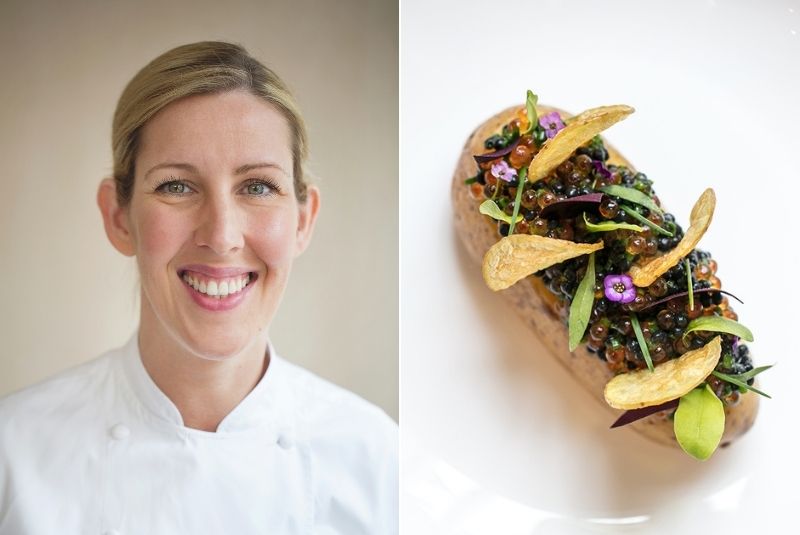 Smyth and her signature dish Potato and Roe

At the start of 2018, it seemed Clare Smyth had achieved goals that most cooks can only dream of: honoured by the Queen with an MBE award and an undisputed place as the first and only woman to run a three-Michelin-star restaurant in the UK. But by 2020, she had also been voted The World’s Best Female Chef while her London restaurant Core by Clare Smyth had claimed a coveted spot in the extended list of The World’s 50 Best Restaurants, proving that barriers only exist to be broken down.

While Smyth is well known as a protégée of Gordon Ramsay, with whom she worked for 13 years, she has created in Core an entirely new concept that sees her firmly established as one of Europe’s leading chefs. With a focus on British produce inspired by her childhood in Northern Ireland, Smyth’s signature dishes include Potato and Roe, created with local potatoes and trout and herring roe, and Lamb Carrot, which puts a vegetable centre stage on one of her most emblematic dishes. 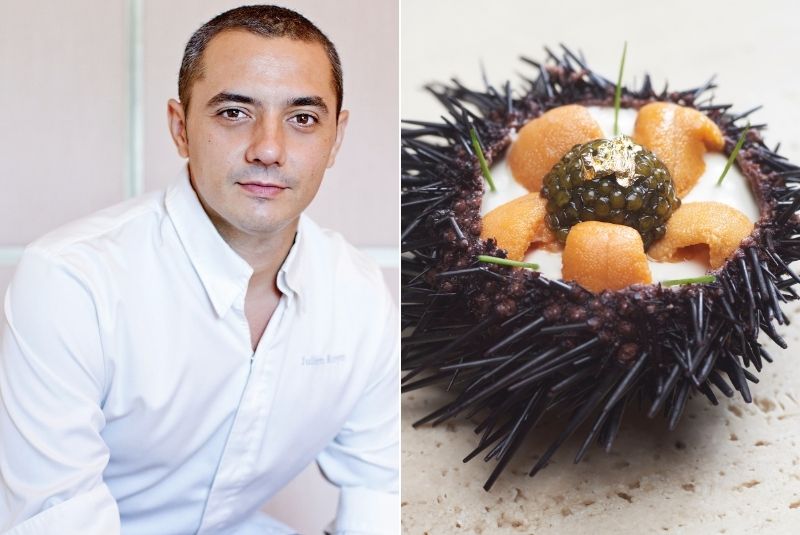 Royer and his dish Hokkaido Uni

Born in Auvergne, France, Julien Royer is the chef-patron of Odette in Singapore, which was named The Best Restaurant in Asia, sponsored by S.Pellegrino & Acqua Panna, in 2019 and 2020. Since opening the restaurant in 2015, Royer has added more and more Asian influences to his menus, taking inspiration from his travels to develop a new brand of local flavour. From pigeon crusted with Cambodian Kampot pepper to a foie gras dish served as a Vietnamese pho, Royer has become a true trendsetter in the Asian restaurant scene and beyond, garnering the respect of the global gastronomic community.

Since the pandemic hit Singapore, Royer and his team pivoted to conceive an entirely new carry-out model, named Odette at Home. The curated home-dining experience, featuring a rotating selection of comforting recipes and Odette classics, afforded the chef the chance to connect to a new audience beyond the restaurant’s traditional space. The pandemic also saw Royer rethinking every aspect of the business – from service to sourcing and the safety of the team – and Odette has come back with a new, inspired focus. 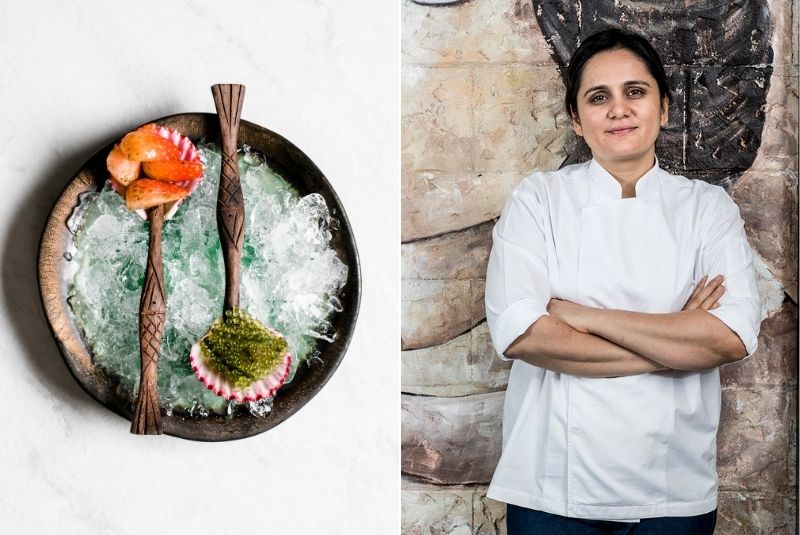 Arora's dish Veg, Strawberries and Seagrapes and the chef herself

33-year-old Indian cook Garima Arora – who was named Asia’s Best Female Chef in 2019 – is the chef behind restaurant Gaa in Bangkok. Inspired by her grandparents’ traditional Indian techniques, Arora’s cooking is praised for the unique flavour combinations created by marrying different spices and extracting strong flavours from vegetables through both traditional and innovative techniques.

The chef has enjoyed a stellar career to date, graduating from Le Cordon Bleu in Paris in 2010 and subsequently training under René Redzepi at Noma for three years, then working with Gaggan Anand in Bangkok for two further years. She opened her restaurant, Gaa, in April 2017, gaining near-immediate success: she become the first Indian female chef to earn a Michelin star in 2018 and Gaa received the Highest New Entry Award at Asia’s 50 Best Restaurants one year later. The coronavirus lockdown in Bangkok provided a chance for Arora to reflect on her dreams, and after closing Gaa temporarily, she has fresh plans for her restaurants in the Thai capital. 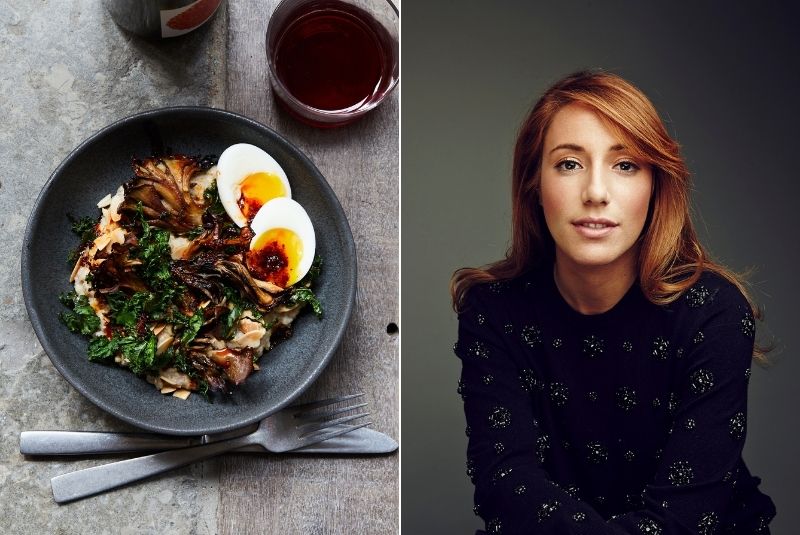 Camilla Marcus is a chef, entrepreneur and advocate dedicated to rethinking what it means to be a good neighbour through the lens of hospitality. She is also the chef-founder of West~bourne, a pioneering hospitality business that began as a zero-waste restaurant in New York. Since closing the restaurant’s doors in September 2020 due to the widespread impact of Covid-19, Marcus has grown the brand to include online retail, packaged provisions and curated culinary experiences.

Through both her business and her advocacy, Marcus is on a mission to forge a better future, dedicating herself to social innovation across fields, from environmental activism to structural reform within the hospitality industry. She is a co-founder of Relief Opportunities for All Restaurants (ROAR), a group campaigning for small restaurant businesses hit by the effects of Covid-19 and helping create a path to a sustainable future. She is also a founding member of the Independent Restaurant Coalition (IRC), an organisation dedicated to advocating for the rights of independent restaurants through national legislative action.


#50BestTalks: Rewriting the Menu, presented by Miele, takes place on the second day of the 50 Best Recovery Summit, bringing the gastronomic community together from 13-15 October. The schedule for the virtual event also includes the previously announced Food Meets Hope by S.Pellegrino on Tuesday, 13 October at 3pm, an hour-long forum focusing on the positive responses, learnings and hopes generated by the unprecedented challenges of 2020, as well as chef masterclasses, live interviews, inspiring virtual debates, the launch of fresh initiatives and much more.

Stay tuned over the next few weeks as we reveal more details about the events and the speakers taking part in the 50 Best Recovery Summit.