In May 2018, seven months after the American Bar at The Savoy in London, UK, took home the title of The World’s Best Bar at The World’s 50 Best Bars 2017, Erik Lorincz – the talented head bartender who had been its leader for eight years – left the post to start his own venture.

A three-month search by bar manager Declan McGurk came down to one candidate for the prestigious vacancy: 29-year-old Macao-based German mixologist Maxim Schulte. We catch up with him during his first month on the job.

Not many people can claim to have held the title of head bartender of the American Bar at The Savoy. The 125-year history of the longest surviving cocktail bar in London has seen only 11 figures leading its award-winning cocktail programme, and each achieved something remarkable.

Between 1903 and 1925, Ada Coleman made history as one of the few women in the industry at the time and as the inventor of the Hanky Panky. Years later, Joe Gilmore served royalty and celebrities from behind the same bar, and conceived the first drink that Neil Armstrong tasted on his return from the moon in 1969 – the Moonwalk, with grapefruit, orange liqueur, rosewater and Champagne.

Harry Craddock, writer of the iconic The Savoy Cocktail Book, and industry legend Peter Dorelli are only two of the other prominent names who stood behind the bar. Most recently, Erik Lorincz took the American Bar to the top of the world, helping it climb all the way to the No.1 position of The World’s 50 Best Bars 2017. So, understandably, there was a lot of excitement when Lorincz and the bar officially announced that he would be moving onto new ventures – but equally exciting was to find out who would be next taking the title.

Three months later, in July 2018, came the announcement. “It was an absolutely overwhelming feeling when I found out, and for quite a long time I didn’t know what to do or to say,” says Maxim Schulte. “Declan video-called me from the bar in the early morning and showed me my new home. I will never forget this call and the feeling.” 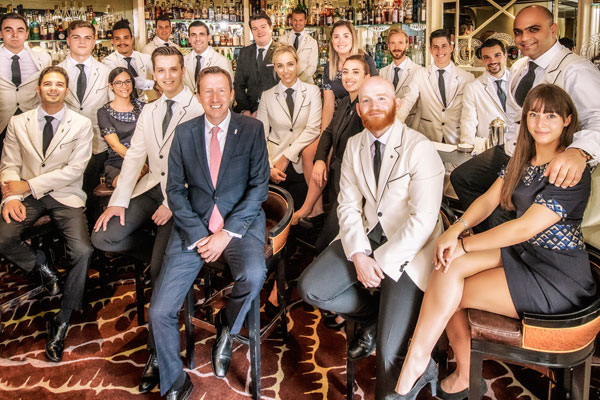 The team behind the American Bar at The Savoy, with McGurk in the centre

Schulte, a 29-year-old mixologist hailing from Germany, was already enjoying a brilliant career before the call from McGurk. He fell in love with the profession in his home country but, keen to discover new techniques and explore new ideas, he was soon off to Asia and the Middle East, where he led bar teams in Hong Kong, Saudi Arabia, Bangkok and, most recently, Macao.

Under his talented direction, The Ritz Carlton Bar & Lounge became the first-ever Macao entry in the Asia’s 50 Best Bars list in May this year. Schulte was also the winner of several international bartending competitions; his creation Stack of Fortune (combining white cocoa cream, orange blossom and bitters, lime, mint and pea blue butterfly soda with gin) was hailed as ‘the best gin cocktail in the world’ after one such event in London in early 2018. He says that bartending gives him a chance to express his creativity, and he was drawn in by the desire to meet different people and guests.

So much success might go to anyone’s head, but Schulte had to keep his feet on the ground to land his latest prestigious job. An old-school cocktail bar with jazz music and an art deco interior, the American Bar at The Savoy is built on a specific ethos of selfless humility where the achievements of the team are above those of the individual. Therefore, McGurk wasn’t only looking for someone talented and with the right credentials, but also an incredible team player, and this is what Schulte is at heart.

“The team has celebrated so many successes and it is they who drive this bar forward,” says Schulte. “If there is anything I want to bring to the American Bar, it would be to be the best team player. We all have to maintain focus to make our guests happy, and certainly for me this is what should be always most important to the team.”

Another important requisite for a bar that has reinvented itself several times over its history was for its leader to have creativity and the ability to come up with new and interesting cocktails and concepts. The American Bar’s current menu, Every Moment Tells a Story, was launched in April and takes inspiration from Terry O’Neill’s black and white photographs that adorn its walls since the 1980s, with concoctions dedicated to the likes of David Bowie, Marlene Dietrich and Clint Eastwood, who have all visited The Savoy. 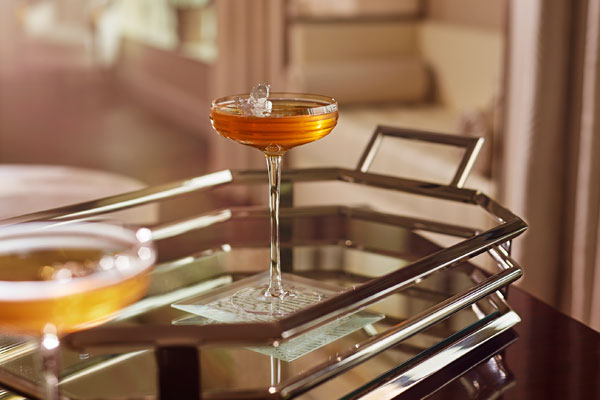 Curtain Call, a cocktail inspired by a 1975 photo of Marlene Dietrich, at the American Bar

“Flavour is the most important [factor] for me,” says Schulte. “Every ingredient has to fulfil a purpose in the drink and every technique should be chosen wisely.” He is a firm believer that there is ‘a perfect drink for every moment’ – and while, for now, Schulte will focus on the existing menu, he confirms that there will be new menu bearing his mark ‘at a certain stage’.

Schulte’s first day at the American Bar was Monday 20th August, and for the past few weeks, he has been busy with an intensive orientation course overseen by McGurk. “The course is brilliant,” says Schulte. “It gives me the opportunity to get around The Savoy, visiting all the departments and getting to know all my colleagues. It is essential that I know the people here and know a bit about every process; it’s only like this I will be able to be most efficient. Declan is a legend in the industry and now working with him, I can see that I will learn a lot over the years.”

As well as learning everything there is to know about The Savoy and its bar, Schulte has also been discovering London’s food and drinks scene. “I love that it is so colourful and that you can have so many experiences. You have these outstanding establishments that have been here for ages, making amazing cocktails in a classic atmosphere. You also have the new bars that go crazy in terms of technique, presentation or flavour. There are so many beautiful minds and so much talent in this city,” he says.

Following the orientation course, Schulte will soon start his real shifts behind the bar and he is ready to put into practice the experience earned through years of mixing cocktails for guests from countless different countries and nationalities. “The main difference [between Europe and Asia] is the type of guest. Their tastes can vary in different countries; it might be that they have a preference for certain flavours or prefer either a sweeter or more sour drink,” he says.

But as we have already seen, the mixologist believes that there is a perfect drink for each moment, and he encourages even those with less experience to get creative with cocktail making in their own homes. “I think the most important thing is your passion for it. Make it as good as you possibly can. Buy the right ingredients, proper ice, and have a great cocktail book on hand. If it does not work out at the first time, try it again, and add your spin on it. Have fun!”

Schulte, McGurk and the American Bar team will be heading to The World’s 50 Best Bars 2018 awards ceremony at the Roundhouse in London, UK, on Wednesday 3rd October, to discover the live countdown of the new edition of the list. Follow the event live via the livestream on Facebook.


Header images: Maxim Schulte and the American Bar at The Savoy