Anatomy of a dish: Gaggan Anand on the cultural significance of rice

Header: Gaggan Anand speaks at #50BestTalks; the exterior of Gaggan restaurant (images on this page: fb://allwecandid)

Gaggan Anand, chef-owner of the eponymous Bangkok restaurant that has topped the Asia’s 50 Best Restaurants list for four consecutive years, spoke about his dish, Paturi, and analysed the cultural significance of its ingredients at #50BestTalks: Life Cycle, presented by Miele.

Behind Gaggan’s award-winning restaurant in Bangkok – with its emoji menu, fun atmosphere and dishes eaten to Kiss songs – is the chef’s tireless work digging into Asia’s history, culture and culinary habits to extract creative recipes, often inspired by both his home country, India, and Thailand, where he has chosen to live and cook.

Gaggan’s acute sensitivity and his wide knowledge of food history are some of the highlights of the dining experience, as demonstrated when the chef discussed the inspiration and multi-layered references behind his dish, Paturi, for the launch of Farm Africa’s initiative Chefs for Change at #50BestTalks in San Sebastian.

A dish of rice and fish curry wrapped in a banana leaf, Paturi is a popular Bengali recipe, which the chef torches as a finishing touch. Reflecting on the importance of rice in Asian cultures, Gaggan said: “When I was a kid, every morning in school we recited the prayer that says ‘Give us today our daily bread’. This was at 7:55am every day, and five minutes later we had breakfast – but our breakfast was rice. Rice was our daily bread.” 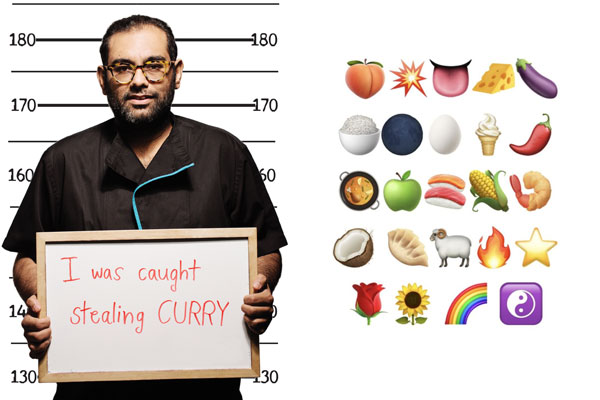 Gaggan and his July 2018 menu in emojis

Nicolas Mounard, CEO of international development charity Farm Africa, which founded the initiative Chefs for Change, saw in Gaggan’s passion for rice a link with his company’s work and ethos. Speaking at #50BestTalks, Mounard said: “When we were trying to make bridges between Africa and the rest of the world, rice became quite obvious, because you have this whole theory that the world is divided between wheat and rice, but many people don’t know that Africa on the rice side of the world.”

Expanding his discussion to take in all of Asia and considering the impact that Chefs for Change will be able to make in a continent so varied and diverse, Gaggan reflected: “There is something in common in all of Asia. I lived in India for 29 years, then in Bangkok for 11 years, and in two years I’m moving to Japan. The most important common thing in all these countries is rice.”

In 2007, when Gaggan moved to Bangkok to open his restaurant, he came into contact with the Thai culture. In his talk, he referenced what is regarded as one of the first and most important inscriptions in Thai language, dating back to the twelfth century, part of which reads: “This land of Sukothai is thriving. There is fish in the water and rice in the fields.”

“Fish and rice are so important in Asia. From Japan with the most expensive sushi, to the poorest people on the street who might eat a leftover fish skin and boiled rice, and congees in China, rice being cooked with fish as a curry is integral to Asian culture,” said Gaggan. Fish and rice are also the main ingredients in the recipe for Paturi. 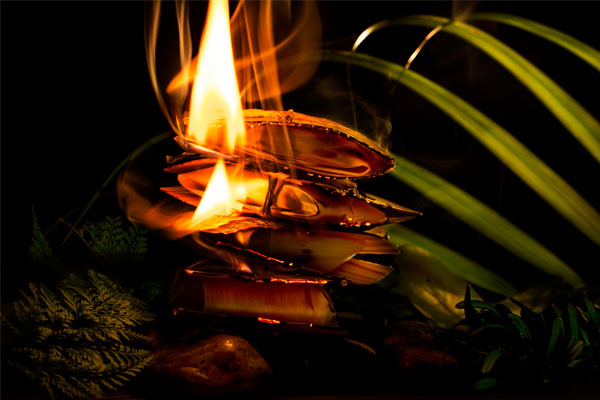 This element of the culture got the chef thinking about human evolution. “Two basic steps towards what we are as humans today are rice and fire. Fire made us human. Animals fight for food, but as humans, we relax when we eat. Fire cooks rice, making it edible,” he said.

Having analysed the role of rice, fish and fire, the chef turned to the banana leaf. “Then I went back to India and our history, because we’re such an old civilisation, and in most places rice was cooked and sold in banana leaves. This was the first utensil in our history and it is still used today in traditional Indian weddings,” Gaggan said. “And that is how my recipe [for Paturi] started.”

Among the many sustainable farming programmes that Farm Africa has put together as part of Chefs for Change, there are initiatives involving rice, vanilla, coffee and potatoes. The chefs are paired with the programme that best fits their current interests and concerns in order to collaborate with the charity and the farmers on how to support them and develop their product.

Read more about Chefs for Change on the website, chefsforchange.org.