After three years with his restaurant, Gaggan, at No.1 in Asia’s 50 Best and with plans to close the flagship in 2020, Gaggan Anand is now turning his attention to a new wine bar and a tofu restaurant in Bangkok.

As a cook from an underprivileged background who made it to the top of the global restaurant scene, Kolkata-born Gaggan Anand has long held a desire to help young people realise their dreams. He has invested in talent including twin chefs Matias and Thomas Sühring, whose eponymous restaurant debuted at No.13 in Asia’s 50 Best Restaurants last year, and young Indian chef Garima Arora, who has won critical acclaim with her modern Indian restaurant, Gaa.

Before Anand leaves Bangkok in 2020 to open a restaurant in Fukuoka, Japan, he has two more dreams to fulfil in the Thai capital. The first is to open a tofu restaurant with Takeshi ‘Goh’ Fukuyama, the same chef with whom he will run the Fukuoka restaurant, and the second is to help his longstanding sommelier Vladimir Kojic to open a casual wine bar. Both new projects will add to a portfolio of Gaggan-driven restaurants in Bangkok that includes casual burger chain Meatlicious. 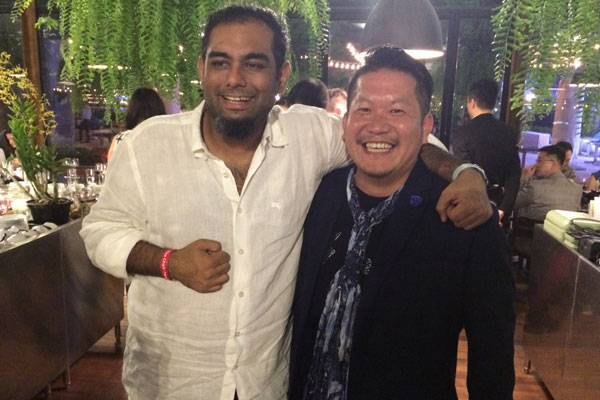 Anand with chef Goh at Asia's 50 Best Restaurants in 2016

While the wine bar is in part to help Kojic and in part to secure Anand’s financial future, the tofu restaurant is a passion project linked to the chef’s love of Japanese cuisine and his desire for Bangkok to expand its diverse culinary options.

“I have wanted to open a Japanese restaurant for a very long time,” says Anand. “Thailand is shaping up to be like Singapore or Hong Kong. It could never beat Tokyo, but it’s one of those Asian cities that is really booming, and Asia’s 50 Best Restaurants is responsible for that. I couldn’t do a ramen or sushi place or izakaya, but one of my favourite restaurants is a tofu one in Fukuoka, which I have been involved with for a long time.”

Mihara Tofuten, opening imminently in Bangkok, is essentially a copy of its original in Fukuoka, which is located close to La Maison de La Nature Goh, the fine dining restaurant run by Anand’s close friend and fellow cook, Goh Fukuyama. With the help of Fukuyama, Anand approached owner Mihara-san and arranged to invest in a Bangkok branch of the tofu restaurant, which serves omakase – essentially a chef’s choice menu – of tofu.

“Mihara-san’s grandfather invented this style of tofu and it’s one of the best tofus in Japan – he created a cuisine out of it,” says Anand. “It is one of my bravest attempts. I’m not doing a safe cuisine. The water is not good enough in Thailand and the Japanese are very serious so every day we’ll have to import 15 litres of fresh water. We are really promoting something different, doing something new. That’s what we do.”

Kojic’s natural wine bar, to be called Wet, will be similarly adventurous in terms of cuisine. Alongside a selection of top-quality imported wines, staff from Gaggan will take turns to be head chef at Wet for a month each, cooking whichever cuisine they like. Chef Zaiyu Hasegawa of Den in Tokyo has promised Anand the rights to serve his signature ‘Den-tucky Fried Chicken,’ and the quirky dish might appear alongside Korean, Japanese, Singaporean or Mexican cuisine on any given month at Wet. 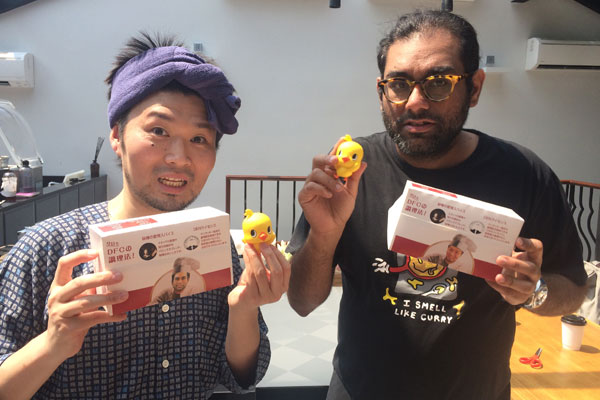 “Wet is super cheeky, very Bangkok,” says Gaggan about the new bar, which is slated to open in May. “It will bring back romance to the table. The problem in bars today is there’s extremely loud music and millennials are on their phones all the time. So we’ll only allow cell phones for taking photos, not for messaging.”

In addition to the no-phones rule, there will be music from Anand’s personal collection of over 1,000 vinyl records, and there will be “super comfortable beds because the problem with bars is uncomfortable seating”. 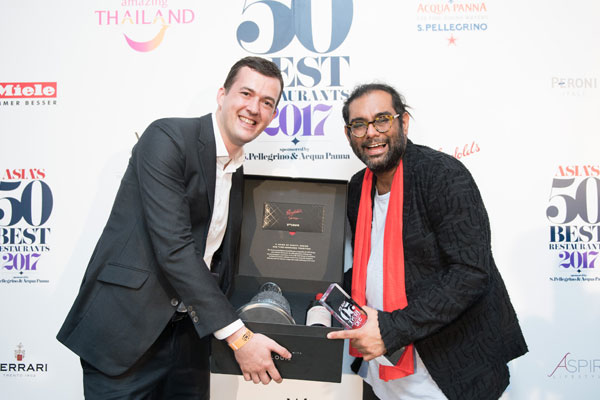 Anand with Vladimir Kojic at Asia's 50 Best Restaurants in 2017

As for the next edition of Asia’s 50 Best Restaurants, which will be revealed on March 27th in Macao, Anand is optimistic following Gaggan’s hat trick of three consecutive years at No.1.

“The ambitious me would always expect to be the best,” he says. ”The responsible me thinks maybe someone else will get it, but I just want someone deserving to take my position.”


Tune in to the livestream on Facebook on Tuesday 27th March to discover the 2018 list of Asia's 50 Best Restaurants, sponsored by S.Pellegrino & Acqua Panna.