The chef behind the remote Swiss restaurant that placed at No.50 in The World’s 50 Best Restaurants 2019 list takes time out to discuss what it means for his project to be announced as the most sustainable in the world

Andreas Caminada’s backyard is one of the most beautiful on Earth. The view from his kitchen window reveals chocolate box Swiss landscapes with a whole Pantone chart of verdant greens bleeding into Alpine peaks that jut down from the horizon like Colgate-white teeth. When you are greeted with a view this good every morning from your workplace window, it comes with the unwritten obligation to maintain it. “We love our homeland, its nature and its diversity of authentic produce,” says Chef Caminada. “We love it so very much that we decided to secure what we love for the generations to come. We want to make a difference and believe that to do this effectively, you have to start with everyday tasks.”

Caminada is a man of his word. His restaurant took home the Sustainable Restaurant Award 2019 at The World’s 50 Best Restaurants awards in Singapore with a record score of 94% in the audit completed by Food Made Good Global. “Receiving this prestigious recognition with such a high score is an incredible honour for us,” says Caminada. “At Schloss Schauenstein, as well as my other projects, sustainability is a major motivation for my team every day. To be rewarded for something that is so important to all of us feels really, really special.”

The report praised Caminada and his team for ‘thinking about his environment in every element of his operation, from ingredient sourcing to the direct effect it has on its surroundings.’ The restaurant and hotel uses 100% renewable energy for power and each piece of meat sourced from breeders in Switzerland. A vast volume of the herbs and vegetables are grown in the restaurant’s gardens and those that are not produced on site are grown to order by local organic farmers. It’s a blueprint that any restaurant that takes its sustainability credentials seriously would do well to follow.

With every season, Caminada looks to find ways for his restaurant to become more sustainable and that doesn’t stop in the dining room or at the pass. “We are currently working on a weekly sports programme for our staff and we have literally just changed the water we provide for them. It has always come from a local source in recycled PET bottles, but now we have given the employees a SIGG bottle to refill,” he says. “I’m also really excited to announce a four hands dinner we will be doing with Virgilio Martínez and Pia Léon for our Fundaziun Uccelin in October. All profits will be donated to projects which foster young chefs and service talents.”

His foundation, launched in 2015, is another shining light in the hospitality industry. Caminada has collaborated with the world’s top chefs to offer stages to young professionals. To date, Massimo Bottura, Gaggan Anand, Daniel Humm and Dan Barber are among 70 other chefs whom successful scholarship winners can choose to work with either in the kitchen, or front of house. 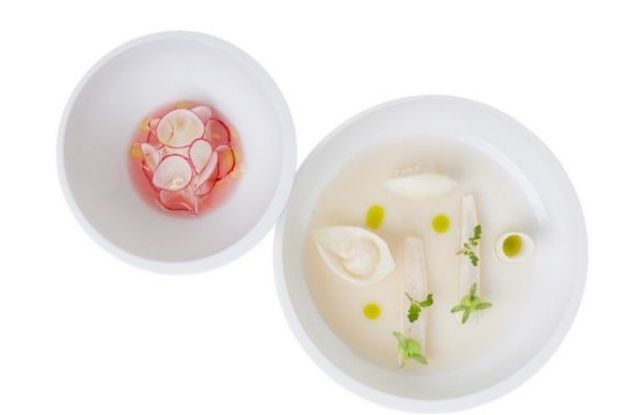 While sustainability is a key focus of the restaurant, it will never be at the expense of the food. Does Caminada have a dish on the menu that he believes best exemplifies his philosophy? “One of our signatures at this time of year is pikeperch from Swiss Walensee with kohlrabi and radish. In the summer, it’s wonderfully refreshing and intense,” he says. “We’re only able to serve it when our fisherman Hans-Peter is lucky enough to catch, so we are excited every morning to see if he has been able to get us some.” The restaurant only uses Swiss fish (no mean feat from a landlocked country) and Caminada meets all of his meat farmers personally to ensure they share his views on animal welfare.

The restaurant's isolated location – set in Fürstenau, officially the world’s smallest town – makes his efforts even more impressive, though Caminada plays it down. “It’s actually quite easy to maintain when you have a privately run business where a leader sets the right tone and acts as a role model to inspire everyone else who works here,” he says. “We have established extremely good relationships with suppliers and we listen to and value their input and knowledge of the region and its ingredients.” Running a progressive kitchen that is at the forefront of ecological thinking, we look forward to seeing how Caminda can further push the envelope of sustainability in the years to come.