Exhilarating dining delivered with grace: how Atomix has perfected the art of hospitality

These are just some of the adjectives used to describe an evening at Atomix in New York. The comments do not come from the restaurant’s website or even from a single enamoured reviewer; each comes from a different member of The World’s 50 Best Restaurants Academy of anonymous experts spread across the globe.

Another of the esteemed voters expounds further: “JP Park's tasting menu brings Korean flavours to new heights. The impeccable service and wine parings are sublime... [making] for one of the most exhilarating dining experiences in the world.”

Opened in 2018 by Korean chef Junghyun ‘JP’ Park and restaurant director Ellia Park, Atomix is tucked away on Park Avenue and East 30th Street in Manhattan’s NoMad district, close to Koreatown. The tiny counter-dining destination is named at No.33 in The World’s 50 Best Restaurants 2022, making it the highest ranked establishment in the US. Even more significantly, it was voted winner of the Gin Mare Art of Hospitality Award. It’s an accolade that prompted tears of joy on stage from Ellia at the London awards ceremony. 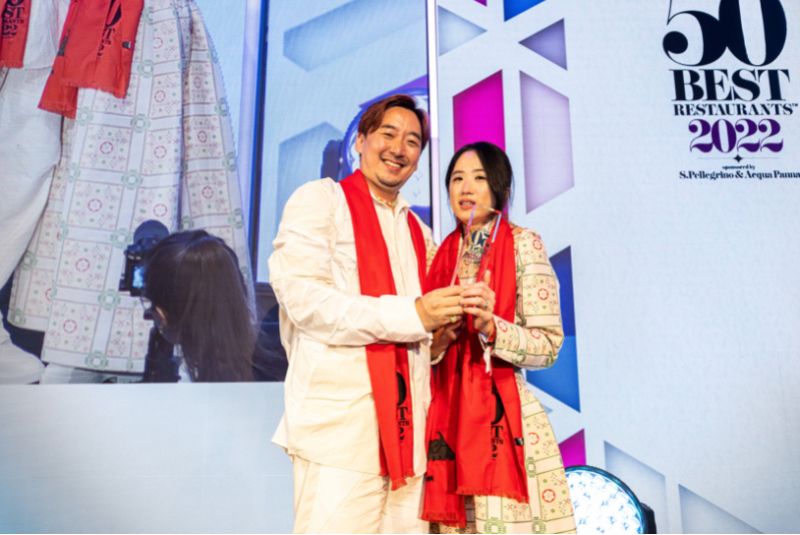 “While a restaurant is a result of its parts, the cuisine of a restaurant is its most essential part; a restaurant cannot be good without good food. The Gin Mare Art of Hospitality Award is the first time in my career that service was the focal point of our recognition,” she explains. “It was a moment of immense affirmation of my role in our company, our service team, as well as our past, present and future.”

The couple moved to the US a decade ago with JP heading the kitchen at the acclaimed Jungsik in NYC. In 2016 he and his wife opened their own banchan-inspired spot, Atoboy, which rapidly built a stellar reputation, enabling them to launch the more upscale Atomix two years later.

JP’s refined, original Korean-inspired dishes – including king crab with buckwheat waffle and blood orange, and yellowtail with dried scallop – are without doubt among the best in a city overwhelmed with great food, but it’s the overall dining experience that truly sets this jewel-box of a restaurant apart. 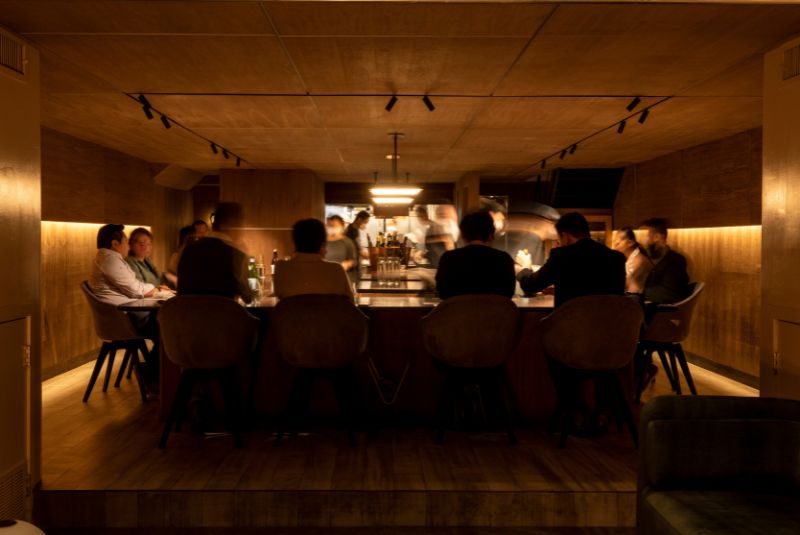 The Atomix experience is delivered to only 12 guests per sitting (image: Evan Sung)

After a warm greeting, diners can stop by the elegant ground floor cocktail bar or skylit lounge area for pre-dinner drinks and snacks, before being seated at the counter that surrounds the open kitchen in the theatrical basement space. Then, prior to the first of 10 courses, the guest will choose their own chopsticks for the evening from an artisan collection.

“Our Atomix story begins with the chef’s welcome card at the table – the first of our menu cards that accompany each course,” explains Ellia. “Our cards are a reflection of what we find important in that season, playing an important role in exchanging our philosophy and story with our guests.”

On each exquisitely designed card, diners can find details of the dish’s ingredients, components and origins, as well as information on the ceramics. JP also outlines the inspiration for each creation. The process inevitably opens up a dialogue with the guests, through which Ellia and her intuitive team can help further cross-cultural understanding.

“My personal farewell card marks the completion of the meal,” adds Ellia. “These moments are all important parts of the sequence that makes up the overall Atomix experience – a small journey.” 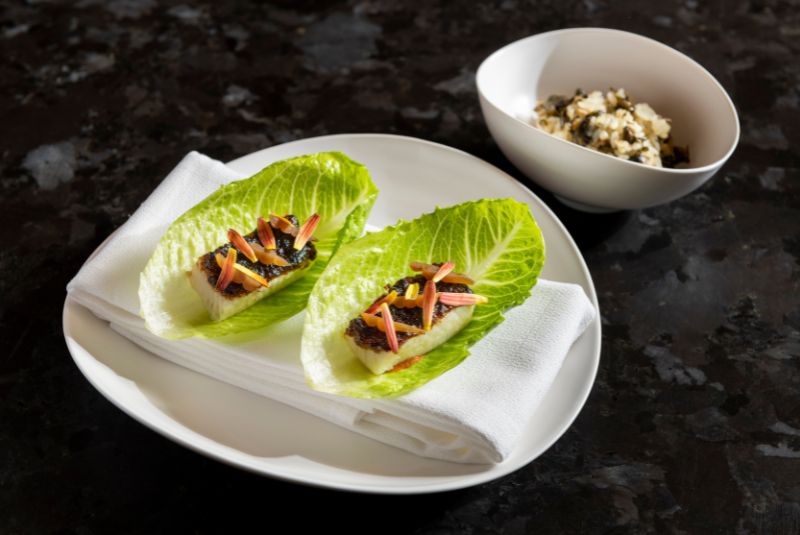 The dried scallop and yellowtail dish is a modern take on a Korean classic (image: Evan Sung)

The Big Apple appears to be the perfect location for the Parks’ considered combination of culinary exploration and cultural education, underpinned by authentic hospitality. “While living here [in New York], even after a short amount of time, we were enamoured with the diversity of the cultures that exist here,” recalls Ellia. “Experiencing New York inspired us to imagine what Korean culture and cuisine could achieve here, to elevate and evolve it.

“In New York, there’s no set framework for how something ‘should be’ and many changes are accepted as organic growth, thanks to its ever-evolving culture and open-mindedness.”

The current team at Atomix is made of 19 people from eight different countries of origin. Aside from Ellia, there is just one Korean member on the service team. “It’s part of our mission and responsibility to share more about our cuisine and culture not just to our guests but also to our team in this diverse, global city.”

With Atomix’s reputation having grown rapidly, 80 per cent of the 25 or so guests per day (the restaurant runs two evening sittings) now come from outside New York. 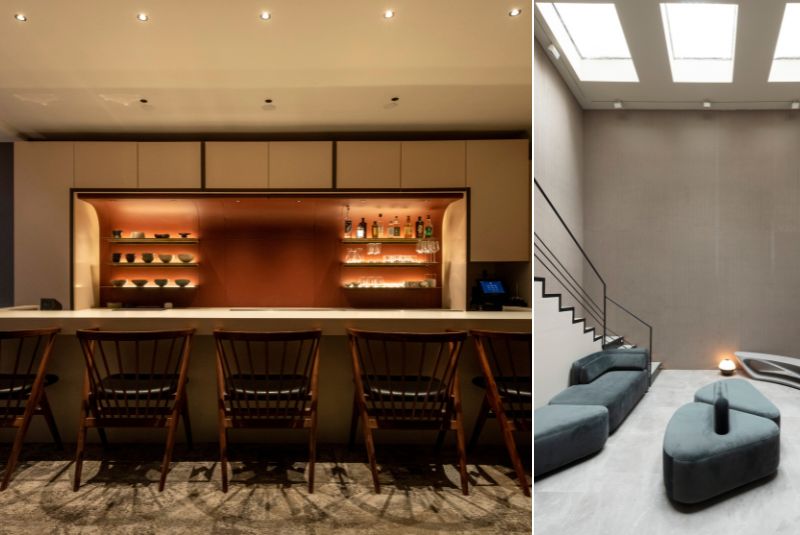 Guests descend from the bar into the lounge area, before heading into the dining room (image: Evan Sung)

In a menu that is constantly evolving as JP and his team reinvent and adjust elements of Korean cuisine according to the seasons, the one constant is the presence of a ‘bap’ or rice dish, though it accompanies different partners each time.

“Like the bread culture in the USA, rice is a staple in our cuisine which creates endless possibilities for pairings, with the ability to harmonise with diverse ingredients with ease and charm. We have shown our guests glimpses of what is possible: served along with cold namul [spinach], eaten with savoury guk [soup], between bites of hot protein… The temperature, texture, flavour and aroma is unique in each of its combinations. Introducing this concept and the culture of rice is exciting every time,” enthuses Ellia.

If JP is the creative director of the collaborative masterpiece that is dinner at Atomix, then Ellia is the producer who ensures everything is in place for the performance to run smoothly. “While we work and operate our restaurants side-by-side, we have a distinct difference in our roles and we respect each other's agency,” she explains. “This wouldn’t be possible without us working tirelessly to earn that respect from each other, discussing and considering the future of our restaurants together daily.

“Building and sharing a singular vision together, and respecting each other’s work professionally, is the most important part of our ability to work well together.” 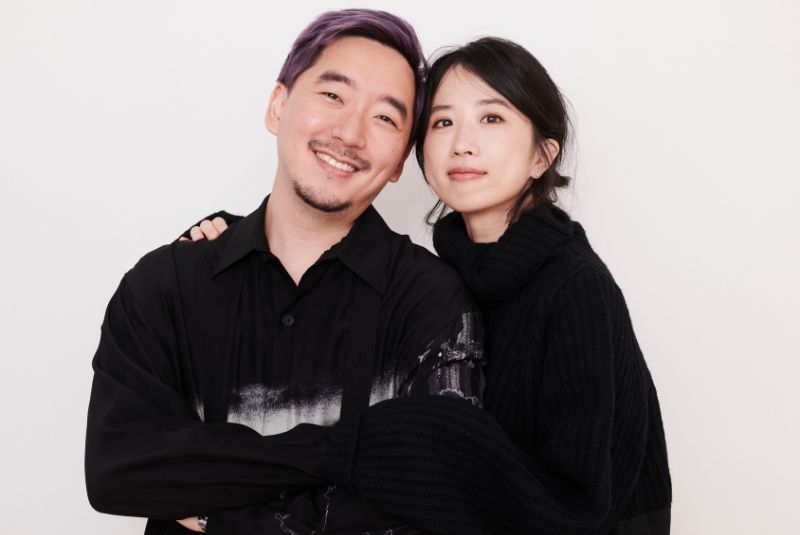 A change in the air

How the Parks create an atmosphere of warmth and grace is art as much as science, but it is also rooted in their Korean heritage, where consideration and humility are sacrosanct.  “Heartfelt consideration is the most important part of hospitality. Not just in our work setting, but I think that consideration for others is important in all relationships including family and friends,” adds Ellia.

As for humility: “It’s ingrained in our upbringing that even while you’re doing great, you should maintain humility.

“We don’t have a rigid or complicated service style. There’s a point during service when you can feel the air change when all guests are at ease, enjoying their evening and our cuisine,” she adds.

Reflecting further on the meaning of the Gin Mare Art of Hospitality Award, Ellia concludes: “A dining experience, a restaurant, is the result of an entire cultural ecosystem. It’s not just about the cuisine but rather the orchestrated combination of its people, cuisine, service and beverage – a true ‘cultural space’.

“I am inspired to hope that the next generation will recognise the immense, inherent importance and value of being of service to others.”

It’s this outlook that has in turn served Ellia and her team so well, as well as their guests at Atoboy, Atomix and no doubt at their soon-to-open new restaurant in New York’s Rockefeller Center, Naro.

Now watch the magic of hospitality come to life in the video.
The list of The World's 50 Best Restaurants 2022, sponsored by S.Pellegrino & Acqua Panna, was announced on Monday 18th July at a live awards ceremony in London. To stay up to date with the latest news, follow us on Instagram, Facebook, Twitter and YouTube.