Ahead of the announcement of Asia’s 50 Best Restaurants 2021 on 25th March, the 50 Best organisation today reveals the first of its pre-announced awards. Voted for by experts from across Asia, Supinya ‘Jay Fai’ Junsuta, owner of the eponymous hawker shophouse in the Thai capital, is lauded with the prestigious Icon Award. 50 Best looks at the wok chef’s 40-year career and unassuming rise to the apex of her profession

Today will be a regular day for Supinya Junsuta, 76, chef-proprietor of Raan Jay Fai, a seven-table shophouse restaurant on Bangkok’s bustling Maha Chai Road. She will rise early, apply a vivid slick of her iconic red lipstick and head to the fish market to select her produce for the day. Before she arrives at her restaurant to begin preparations, an unrelenting line of customers will begin to build from sunrise to guarantee a seat at the table. The continuous stream of patrons will continue until early evening when Bangkok’s current restrictions say that Jay Fai must close. But as a rule, her restaurant will be sold-out by then, anyway.

It’s been a similar circadian rhythm for the past 40 years. Junsuta launched Jay Fai – meaning ‘Sister Mole’, her nickname, a reference to the birthmark on the right of her nose – in the early 1980s. She worked six days a week, personally wok-frying every dish that the restaurant serves, only recently allowing herself an extra day off, and one vacation a year. When she is not around to cook, the shophouse is closed. 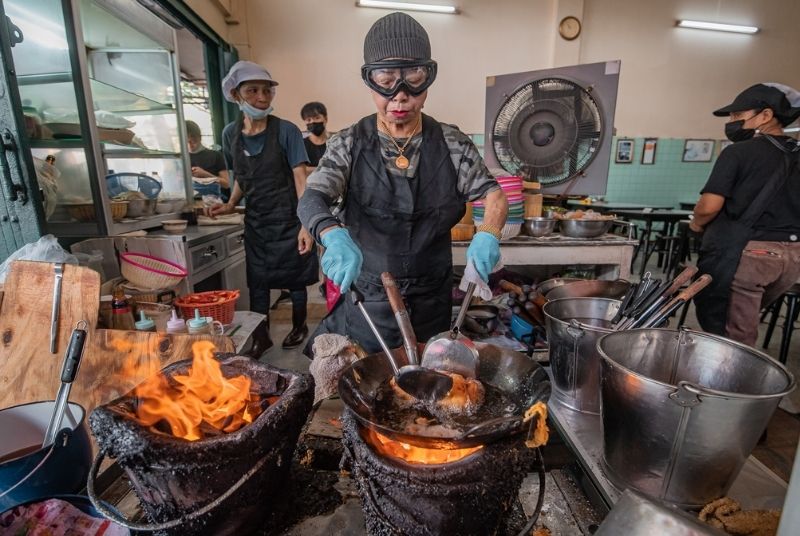 Supinya 'Jay Fai' Junsuta, at the wok station she has operated for 40 years

Her unwavering dedication to finely tuned street food, devotion to her customers and insistence on using only the best-quality produce available in the Thai capital sees her receive the Icon Award by Asia’s 50 Best Restaurants. It is the first time the accolade has been given to a hawker cook and she joins a glittering line-up of previous winners, including acclaimed Japanese master chefs Seiji Yamamoto and Yoshihiro Murata. “I’m surprised and honoured at the same time,” Junsuta says, with typical modesty.

It’s not the first time Junsuta has been in the glare of the international spotlight. In 2018 Jay Fai was recognised with a star in the Michelin Guide, making hers the first Thai street food restaurant to receive the accolade. It brought with it the attention of the world’s food media and the accompanying caravan of global gastronomes. All made the pilgrimage to Bangkok to try her khai jiao poo (crab omelette), pad kee mao talay (drunken noodles with seafood) and her take on a dry tom yum, an innovative dish of her own design that takes the sour, sweet, fragrant and spicy notes of the iconic soup and reimagines the flavours to create a plate without broth that would sit happily on a fine dining restaurant menu. 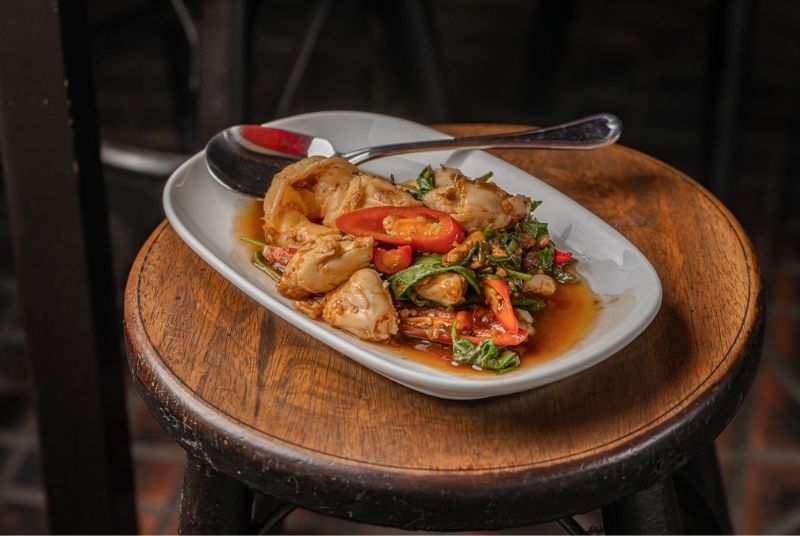 School of wok
Junsuta started work aged 12 as a seamstress, eschewing education to earn money for her family. After 10 years in the craft, a fire destroyed her equipment, forcing her to find other avenues of work. Cooking was in the family’s blood – her mother ran a stall hawking chicken noodles – but the young Junsuta was told she did not have the skill to make it as a chef; her mother criticised her technique and palate.

She viewed it as a challenge, dissecting dishes with scientific accuracy, looking at the composition of each ingredient and how it responded to heat, before coming up with her own twists on the recipes she had learnt at her mother’s apron. “I got into cooking through necessity, poverty and contempt,” explains Junsuta. She wanted to put right her mother’s opinion of her skills and soon found herself as the sole provider for her family before she reached 30.

The first iteration of her street food stall contained little more than one portable wok fire, a table for ingredient preparation and a pot where she would take customers’ money. She fast developed a reputation as serving some of the best pad Thai in the city. With a loyal customer base in place, Junsuta saw opportunity.

She took a gamble that would define her future. Junsuta invested one month's profit on premium ingredients: in this case, huge king prawns, that would form the basis of her pad Thai and in turn her strategy for the restaurant. Laughed off by her fellow street vendors as too expensive for city workers’ lunch, the dishes Junsuta created would sell for up to ten times the price of her neighbours’. 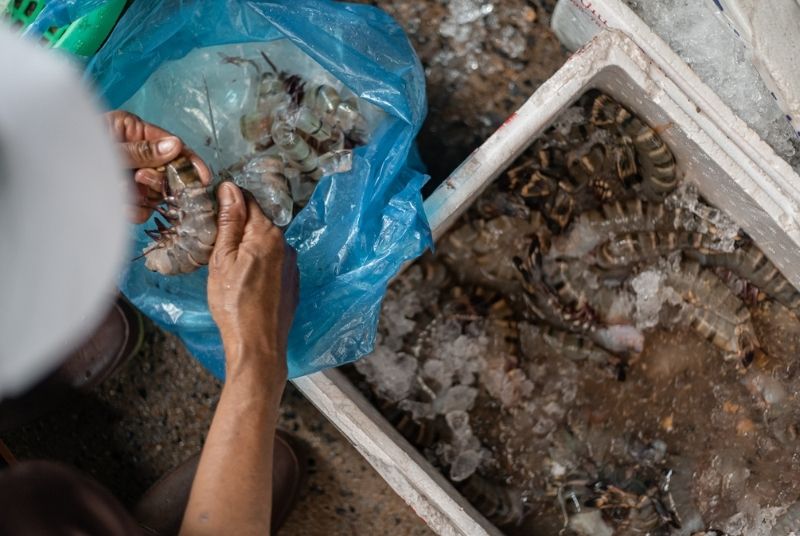 As reputation spread about the woman serving humble dishes with luxury produce, the line to her stall grew longer. When the nearby gambling houses started making morning orders that would sell-out a large proportion of her stock on a daily basis, she knew she was onto something. She saved the money from two years’ street trading to buy the shophouse where the restaurant sits today, with just seven tables and the same regular guests who have frequented her restaurant for nearly half a century.

A reputation for excellence
To the dismay of Bangkok’s fine dining restaurants, Junsuta has access to the best produce in the city. The relationships she has forged with market traders over decades sees her get first choice of Thailand’s celebrated seafood. She drives a famously hard bargain, passing on the cost fairly to her guests. “Quality and fresh ingredients should be the foundation of the food you eat, even those you choose on a daily basis,” Junsuta says.

Although her restaurant has scores of dishes, it’s the unique crab omelette that people come from across the world to try. Priced at north of 1,500 baht ($45), it contains 1lb of fresh crab, bound in a Japanese-style tamagoyaki omelette. “I taught myself the process of making the folded omelette and it took a lot of time,” says Junsuta. “I pay very close attention to all my dishes, but I think this crab dish has become the signature because you can’t find it anywhere else. It is composed of the very best ingredients I can find and it has original flavours.” 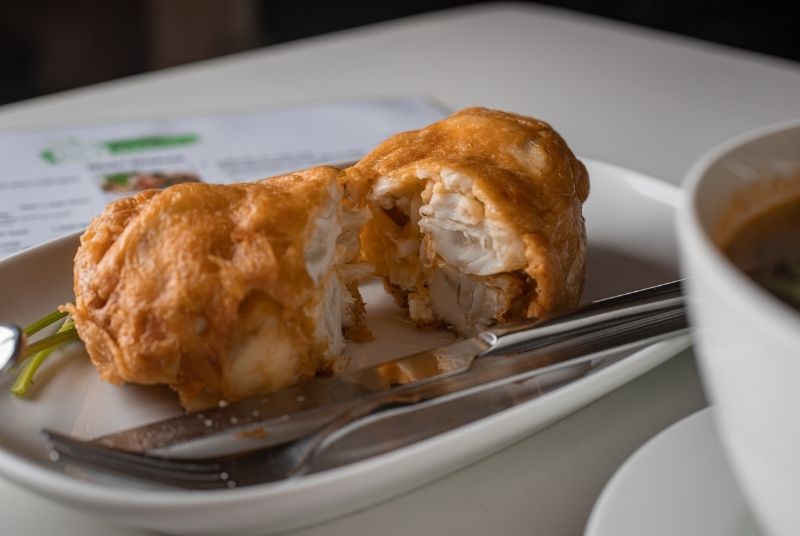 After almost half a century at the stove, Junsuta has no intention of hanging up her wok. “If you asked me 20 years ago, I would say my motivation was my family, but today I do it for the love of cooking as well. I am proud of my boldness and I have never regretted it,” she says. “The key to my success has been hard work, dedication and patience. You can’t give up, so neither can I.”

Be sure to tune into the virtual ceremony of Asia's 50 Best Restaurants 2021 on 25th March, which will be streamed on Facebook and YouTube.