With just over a month until the announcement of The World’s 50 Best Restaurants 2018, which will be held in Bilbao on Tuesday 19th June, we continue exploring the gastronomic culture of Bizkaia, the region where the awards programme is taking place.

After discovering all about pintxos with chef Andoni Luis Aduriz, embarking on a San Sebastian food tour with Juan Mari and Elena Arzak, and taking a culinary trip through Bilbao with Eneko Atxa, we now dive into Basque white wine or txakoli.

Opened in 2005, Gorka Izagirre is a family winery located in Larrabetzu in the Basque Country, about 15 minutes from the capital Bilbao, specialising in the production of txakoli. “Txakoli is an essential part of Basque culture and it unites us to our territory,” says Bertol Izagirre, who runs the winery.

Bertol Izagirre is Azurmendi chef-owner Eneko Atxa’s cousin and the son of the original founder of the winery, Atxa’s uncle Gorka Izagirre, after whom it is named. Azurmendi, located just up the hill from the cellar, has always made the most of the region’s unparalleled fresh produce, and the winery is an extension of the same mindset. “We want to raise the quality of the wines produced in the Basque Country and to give them more value, first at the local level and then internationally,” says Izagirre.

Here are seven facts from Izagirre on what makes txakoli unique.

“Because of its freshness and the taste of white fruit and white flowers, txakoli is naturally a wine that you drink as an aperitivo, but it also goes very well with shellfish and oysters, traditional products of Bizkaia. The more mature wines are voluminous and rounded, so they go well with fish, spicy foods and fresh cheese. In the region, they are very popular in restaurants and they're great with pintxos, but they are also enjoyed at home – you can open a bottle of txakoli for any special occasion.”

2. Txakoli is produced with artisanal techniques

“Our grapes, an Atlantic variety, are small and low in productivity – a bunch fits into the palm of a hand and you need more than a kilo of grapes to make a bottle of wine. This requires more effort and it becomes necessary to harvest the grapes by hand. Our vineyards are found on the hills of Bizkaia, which can reach up to a 30% gradiant, making it impossible to use much machinery. We also produce each small plot separately. Therefore, the production of txakoli is very much artisanal.” 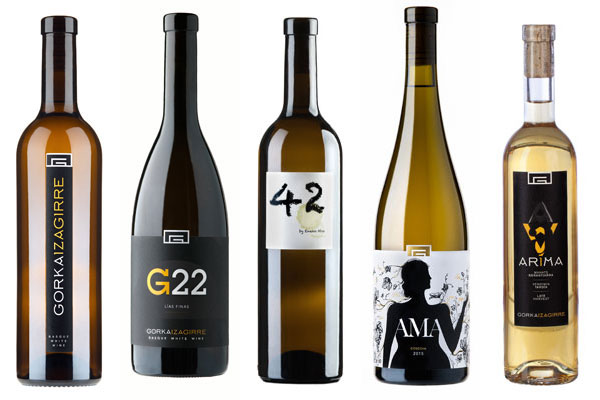 
3. Txakoli has a long history – but almost disappeared in the 19th century

“The first writings about txakoli date back to the 13th century, but with industrialisation taking foot in the 19th century, many people abandoned the traditional Basque farm houses or caserios in the countryside. We lost almost all txakoli vineyards – at the end of the 19th century there were 1,200 hectares in the region, while nowadays there are only about 400. Around 20 to 25 years ago, some young wine producers started investing in local grape varietals again and we are part of that group.”

4. The next 10 years are a crucial period for txakoli

“Txakoli used to be only a young wine that you would drink within a year or a year and a half. But at Gorza Izagirre we are moving away from that to produce wines that you can consume within three, four or even five years. We are creating wines aged on the lees, barrel-fermented wines and late harvests. In the next 10 years, we want to grow not in size but in quality. We want to create wines that are more mature and versatile and to diversify the offer. We believe we have something that cannot exist anywhere else. We already serve and produce special wines for Azurmendi, but we are also thinking of opening a special micro-winery in 2019.”

5. In 2016, some bottles of txakoli ended up at the bottom of the ocean

“We did a special experiment in 2016, in which we submerged some bottles within barrels in the ocean and we aged them there for six months. We wanted to see how the wine would develop under these circumstances, as it had never been done before. We found that the wine was more acidic and that went very well with it, but the delicate taste of fruit was overpowered by the wood. Regardless of the results, it was an interesting experience.”

6. Txakoli is popular in Japan and the United States

“Outside of the Basque Country, one of our biggest international markets at the moment is Japan. Like Bizkaia, they also have an incredible gastronomic culture and that is why the wine became popular there, because of our shared love of good food. Another important market is the US, where there is a lot of willingness to try new things. At the European level, we are expanding in the UK and especially in London, as Azurmendi opened a foray there in 2016, Eneko at One Aldwich.


7. Txakoli is all about the connection with the earth

“The best part of my job is that I’m in touch with the earth. Txakoli unites us to our territory more than anything else does. The best thing is seeing the vineyards and meeting the people who work in the sector, seeing how everything comes together when txakoli wines complement our gastronomy. And when you’re at a restaurant and someone at the table near you asks for your wine – that is the most gratifying feeling. We still have to grow to make txakoli wines compete on the global market, but it is a great and satisfying project.”


Watch the highlights from last year's awards week in Australia: