How to eat pintxos like a Basque by Andoni Luis Aduriz

With The World’s 50 Best Restaurants preparing to celebrate its awards programme in Bilbao in June 2018, we explore one of the most characteristic and unique features of Basque gastronomy: the ‘haute cuisine in miniature’ phenomenon known as pintxos. Mugaritz chef Andoni Luis Aduriz gives us his 10 insider tips on how to enjoy pintxos like a true Basque.

You could describe a pintxo as a bite-sized snack that you enjoy before a meal in the bars of Bizkaia, but this wouldn’t be doing it justice. The typically Basque practice of eating pintxos is deeply woven within the customs and culture of Bizkaia. Pintxos are not only what you eat, but also the way you eat them and what you do while eating them.

San Sebastian-born Andoni Luis Aduriz, chef-owner of restaurant Mugaritz in the town of Errentería, has lived in the Spanish Basque Country his whole life. He helped us unravel the mysteries and misconceptions surrounding pintxos.

“Pintxos were born as accompaniments for people having a beer or a glass of wine in a bar before lunch or dinner. The name is derived from the Spanish pincho, meaning cocktail stick, since the small bites were traditionally ‘spiked’ with a short skewer to a piece of bread. Over the decades, this tradition was lost as pintxos developed into something much more sophisticated,” says Aduriz. 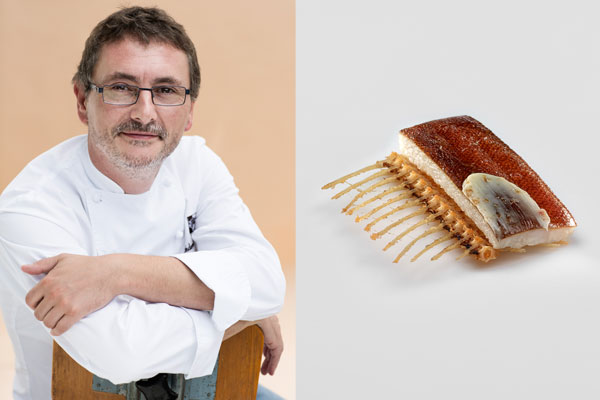 Chef Andoni Luis Aduriz and one of his bite-sized creations: lacquered sole and butter

Here are ten tips that will help you find your way in the buzzing pintxo scenes of San Sebastian, Bilbao and the whole Basque country, in the words of the chef.

1. Pintxos before lunch or dinner won’t spoil your appetite

“Pintxos were created and designed to be eaten in small portions. The Basque custom is to go to the local bar and eat a couple of them before lunch or dinner, especially on weekends and holidays. As you traditionally have them with a drink, we have something called zurito, which is basically a quarter or half-pint of beer to have alongside your pintxo.”

2. Pintxos are a social affair

“You share a beer or a glass of wine with your friends and you eat a small bite while you talk and socialise. Pintxos were designed to be talked over, to be shared with friends and family and to keep people moving around the town. They’re inherently social.”

3. Eat only one pinxto per bar 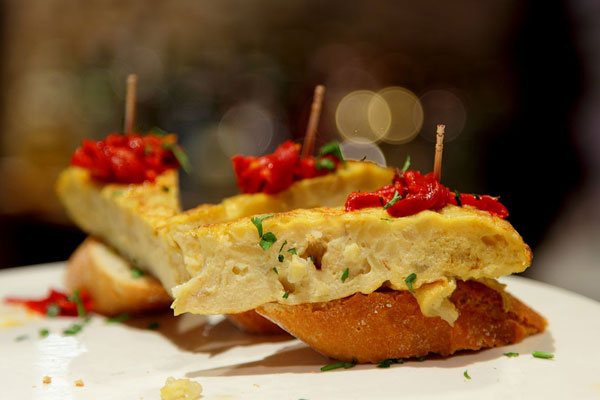 “In each city, town and even neighbourhood there will be a bar that has specialised in one particular pintxo. It could be the classic tortilla de patatas (Spanish tortilla made with potatoes), or ensaladilla rusa (Spanish potato salad) or croquettes, or something more sophisticated or specific, like marinated anchovies. Ask around to find out what each bar is famous for and move to different bars to try each specialty.”

4. If on a tight budget, eat pintxos on a Thursday

“Something that has become more popular in recent years is the pintxo-pote. In Basque, pote means drink. On Thursday evenings, bars often have special deals to have a pintxo and a drink for a reduced price. It’s a great way to enjoy them and it’s effective from an economic point of view.”

“There are big pintxo competitions in Bizkaia, from local to regional and national. These are usually more sophisticated pintxos and they are judged on taste, technique and preparation. The bar that wins will then usually offer their winning pintxo for free for anyone who’d like to try it.”

In 2017, the winner of the XII Campeonato de Pintxos Amstel Oro (a country-wide pintxo competition) was a bite called “Mika,” a shrimp concoction with bacon in a beer-tempura batter, accompanied by vegetables, mayonnaise and lime zest on onion bread with homemade mayonnaise, prepared by the chefs of the Gran Sol bar in the town of Hondarribia.

6. Pintxos are not tapas

“Pintxos share many characteristics with Basque gastronomy and that is what sets them apart. They are made with typical Basque ingredients and use local techniques. In other parts of Spain you can find tapas that reflect that particular region.” 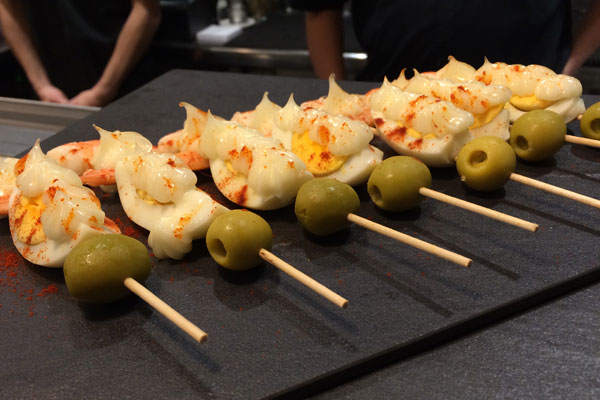 “When I was a kid, pintxos still used to come with a cocktail stick to fasten the bite to the bread. Then you would be charged based on the number of sticks you had on your plate. This tradition has mostly been lost as pintxos became more sophisticated, both in terms of techniques and preparation, but some still have the characteristic cocktail stick in the middle.”

“Our menu at Mugaritz is eaten almost entirely with the hands. For me, that is not strange because in the Basque culture, we eat most pintxos with our hands, so I’m used to it. There is a natural link between that and the menu at Mugaritz.

“The other thing is quantity. If you’re making your food in small portions, just a bite, you can have stronger flavours. You can eat a bite of something really sour, or really acidic or salty, but you couldn’t have a whole plate. That influences my cuisine at Mugaritz and allows me to try different things.”

“Very often, the techniques, ideas and concepts developed in new Basque cuisine are used as inspiration by the bars to create new pintxos. However, sometimes the opposite happens. Not many people know that Juan Mari Arzak’s signature pastel de kabrarroka (red scorpionfish pudding) at Arzak was inspired by a pintxo bar that made a similar pudding with a different fish.”

“When I was a kid, my parents would take me to the bar every Sunday to have a pintxo. It was a stuffed pepper filled with a meaty mayo, coated in breadcrumbs and fried. I used to dream of that pintxo all week. I could have had ten every time, but I was only allowed to have one. It was like a reward. I will never forget how delicious it was.”

Stay tuned for Elena and Juan Mari Arzak’s pintxo tour of San Sebastian and a guide to Basque wine by Bertol Izaguirre of Azurmendi.