Tomás Kalika is still in shock after picking up the Chefs’ Choice Award, sponsored by Estrella Damm, at the Latin America’s 50 Best Restaurants 2019 awards in Buenos Aires. The Jewish-Argentinian chef of Mishiguene – meaning ‘crazy’ in Yiddish – breaks bread with 50 Best’s William Drew to discuss his home town, pastrami short rib and opening in Miami

First, what does it mean to you to win an award voted for by your fellow chefs from Latin America’s 50 Best Restaurants?

I feel like this award is a big hug from all my Latin American colleagues. It is beautiful, and it is accompanied by an incredible sensation: receiving love and affection. As human beings, all of us want to be loved!

How would you describe the current food scene in Argentina?

Gastronomy in Argentina is in an excellent moment. This ‘moment’ is the result of the immense work that has been carried out over a long time by chefs, winemakers and producers such as the great Gato Dumas, Ramiro Rodriguez Pardo, Francis Mallmann, Dolli Irigoyen, the Concaro sisters, Beatriz Chomnalez, Germán Martitegui… there are too many to name. These people have changed the direction of gastronomy in our country. They have prepared the ground for today: consumption habits have been modified, altering and improving the quality and variety of products and services. We have to build on their work, to keep growing and evolving.

Your Proyecto Diáspora [Diaspora Project] is set to become a book and TV series. Can you summarise it?

The Diaspora Project seeks to tell the story of our people through its recipes. The Jewish people throughout history have been migrants. These migrations have been a vehicle for exchanging ingredients, recipes, culture, traditions and customs. Where we were leaving, we took all the learnings of those lands; while where we arrived, we did so with our suitcases full of recipes, mixing the old with the new. Nobody has ever investigated it in this way – and it is much bigger than we ever dreamed.

What is the biggest misconception about Jewish food?

When you talk about Peruvian cuisine, you do it by referring to a specific territory and everything that has happened within that territory. But when you talk about Jewish cuisine and its history, you have to understand that from the beginning we have been traveling the world, from Asia to Africa, through the Middle East, Europe and America. By adapting local recipes and customs to our culture, we have created one of the most extensive and fascinating culinary maps in the world. The Jewish cuisine of Calcutta has little to do with the Jewish recipes of Aleppo or even those of Warsaw, for example. However, our food sits very deep in the emotional memory of our people, since it is a cuisine that was not so gastronomic, but remained within the kitchens of our houses, used by our mothers and grandmothers to transmit emotions and treasures.

Your pastrami short rib dish has gained quite a reputation. How did it come about?

Each dish tells a different story and comes from a corner of the planet. With our pastrami short rib, for example, we wanted to recreate this magnificent recipe of the Jewish cuisine of New York, but we wanted to do it from the Argentine perspective. So we use the most Argentinean cut of all: the entire rack of ribs of the cow. From this, we create the pastramied short rib. 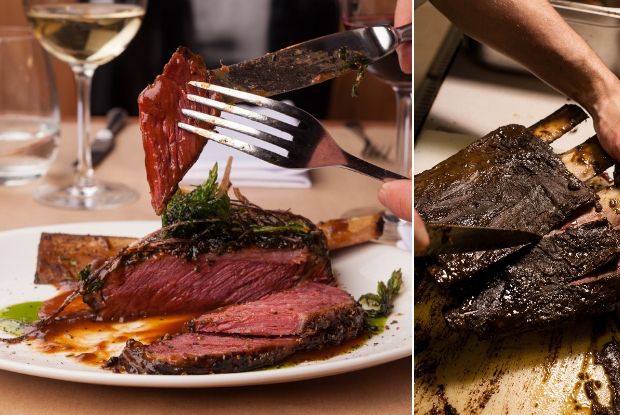 What’s next on the Mishiguene menu?

We change 70% of our menu seasonally. We are currently enjoying beans, asparagus, artichokes and peas in spring [September-November], while very soon we will give places to summer ingredients [December-February] that we are passionate about like tomatoes and watermelons. The constant evolution of the menu keeps us alive.

Tell us about your current pop-up in New York.

It’s a project created by USGH (Union Square Hospitality Group, led by legendary US restaurateur Danny Meyer) and Lexus in the Meatpacking District of Manhattan, called Intersect. The space is designed to house unique gastronomic concepts from around the world, and for us New York was a natural destination for our cuisine. We have worked very hard to make the guests who visit us in NYC enjoy the same experience as in BA, adapting the kitchen equipment, glassware, plates, music and even uniforms so that everything looks the same as at home. The pop-up will run until 1 January 2020. We are already working for the big party on 31 December!

And we hear you may have more permanent plans in the US, too?

We really want to take Mishiguene to Miami. It is a very interesting foodie market, which is constantly growing and evolving and where there is also a huge Jewish community. Hopefully soon we will have further news to share with everyone.

What are your other long-term ambitions?

Together with my business partners we dream of a bigger Mishiguene. We have much more to do, to cook and many more stories to unveil.

You’ve just had the Latin American culinary world come to your hometown for Latin America’s 50 Best Restaurants. How was the experience?

Receiving all our brothers and colleagues from Latin America at home was memorable. We have never been so connected to each other; Latin America as a region is more united than ever. During those days, Buenos Aires had the opportunity to demonstrate that it is one of the most captivating cities in the world and is more beautiful than ever. This is important since we know very well that gastronomic tourism activates a great amount of resources, generating work and economic development. We also enjoyed the participation of our maximum global reference that is [Argentine chef] Mauro Colagreco.

And, lastly, are you still a bit ‘mishiguene’ [meaning ‘crazy’ in Yiddish] yourself?


Read more about the highlights from Latin America's 50 Best Restaurants and watch the award winners collecting their coveted trophies.