Buenos Aries played host to culinary luminaries as the region came together for Latin America’s 50 Best Restaurants. Chefs, industry VIPs and top journalists gathered to celebrate with a series of gastronomic events and the unveiling of the new list, sponsored by S.Pellegrino & Acqua Panna. Catch up on the goings on with our highlight reel

1. A suitably meaty start to proceedings…

Three days of 50 Best festivities kicked off with a special dinner to welcome guests to the city of Buenos Aires at renowned steakhouse Don Julio, later announced as No.4 in Latin America’s 50 Best Restaurants 2019, rising up from No.6 last year. Diners were served some of the world’s finest meat alongside vintage Argentine wines. Rattling the pans in the kitchen alongside Don Julio parilla master Pepe Sotelo was none other than Mauro Colagreco, Buenos Aires’ prodigal son and the man behind Mirazur, The World’s Best Restaurant 2019, sponsored by S.Pellegrino & Acqua Panna. Every guest at the dinner received a 50 Best-branded personalised steak knife as a memento of the evening. 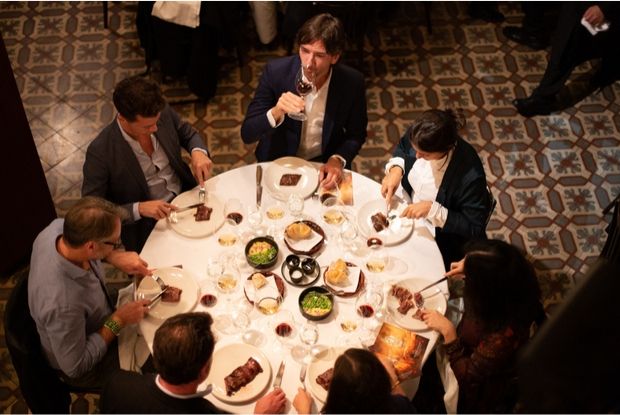 2. …and it carried on into the night

The bars of Buenos Aires welcomed the 50 Best tribe with open arms. It proved perfect timing, since The World’s 50 Best Bars 2019 list announced the previous week list saw Tato and Aline Giovannoni’s Floreria Atlantico reach the dizzying No.3 spot, while picture-perfect Presidente debuted on the list at No.33. 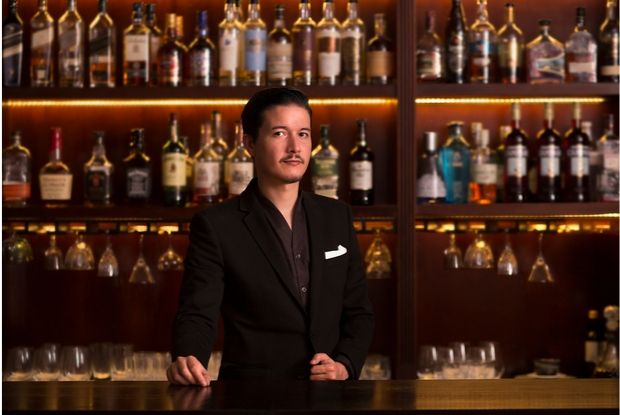 Two of life’s essentials went under the microscope at #50BestTalks, presented by Miele, where four of the region’s top chefs took to the stage with 50 Best’s Laura Price to discuss how the art of pastry fits in to the canon of Latin American cuisine. Joaquin Grimaldi, pastry chef at Four Seasons Hotel Buenos Aires, kicked things off with a homage to ice cream; Elena Reygadas of Rosetta in Mexico City explored the tradition of bread in Mexico; Jesus Escalera, Latin America’s Best Pastry Chef 2018, gave his take on the region’s ‘sweet revolution’; and Vanessa Gonzalez of Uruguay’s Parador La Huella celebrated traditional and indulgent desserts. There was a special guest appearance from Dabiz Muñoz, the chef behind Madrid restaurant Diverxo, who joined a discussion ranging in topic from role of social media to diversity in the kitchen. Guests sampled an array of breads and desserts, with Gonzalez’s dulce de leche volcano receiving rave plaudits. 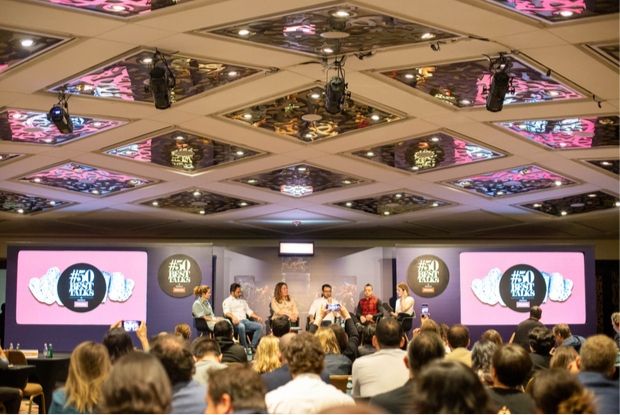 4. The Chefs’ Feast was on fire

The night before the main awards, chefs from this year’s list enjoyed a private party at La Mansion, a classically styled Argentine house in the grounds of Four Seasons Hotel. Chefs from across Buenos Aires came together to host an asado, bringing signature ingredients from their restaurants to throw onto the fire pit and grill. 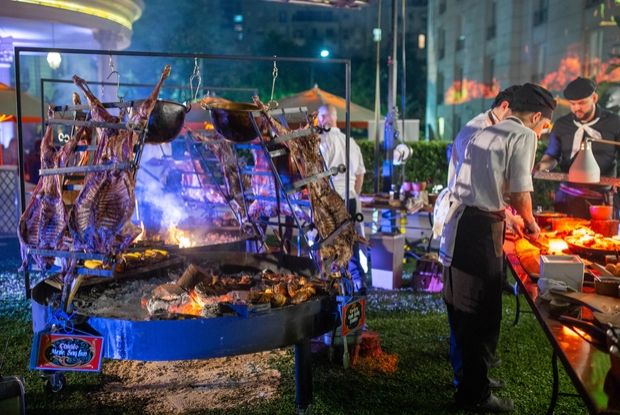 Guests arrived for the annual awards ceremony at the city’s Usina del Arte to the soundtrack of heavy metal from a live band as the chefs from the restaurants ranked 50 to 1 collected their iconic red scarves. Maido chef-owner Micha Tsumura’s air guitar hit all the right notes. 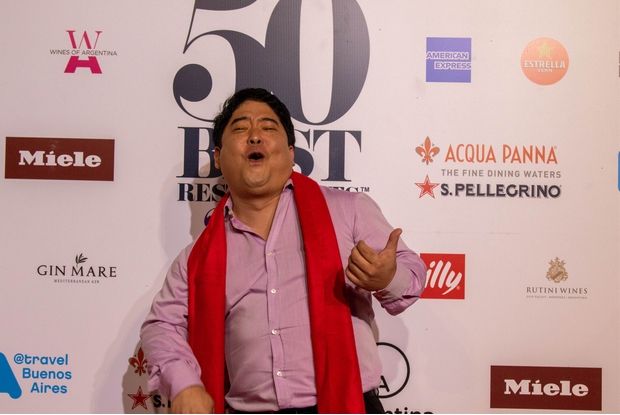 6. Speculation was rife at the awards reception

As tension mounted and predictions flew around the room, chefs, media, sponsors and leading lights of the Latin American hospitality industry caught up over some light bites and excellent local wine, courtesy of Wines of Argentina, along with cocktails by Gin Mare, beer from Estrella Damm and coffee by illycaffè. 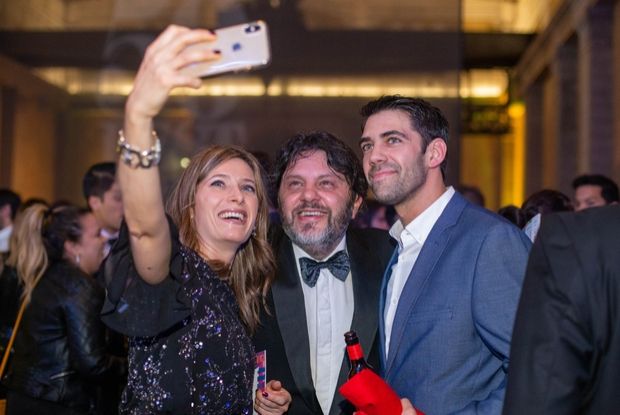 Jaime Rodríguez and Sebastián Pinzón are young chefs with big ideas and their restaurant Celele was announced as The Miele One To Watch 2019. Their modern take on Caribbean food was heralded as ground-breaking in its combination of the region’s historic ingredients cooked using a range of modern techniques. 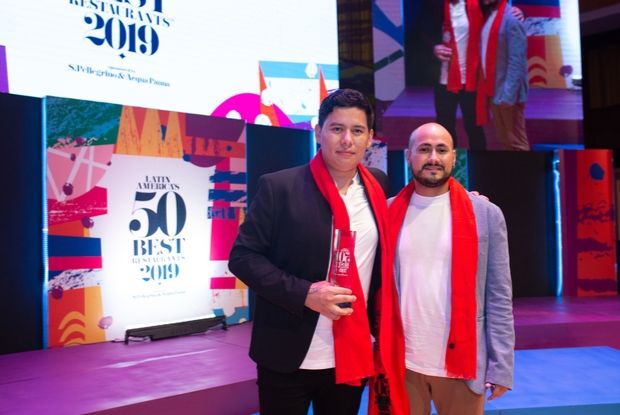 A culinary and social campaigner, Schiaffino’s name is known up and down the 6,400 miles of the Amazon River. He has devoted a career to maintaining the traditions of the indigenous people of the region and bringing the produce they eat every day to a wider audience through his restaurants. With his help, the history of the Amazonian people is being maintained. 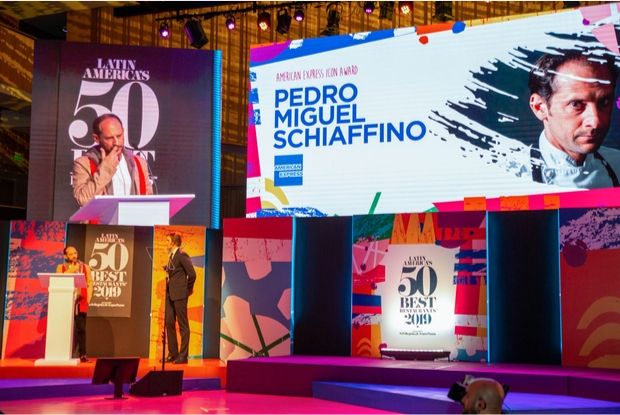 Tomás Kalika took home the only peer-voted award of the night, when he was announced the winner of the Chefs’ Choice Award, sponsored by Estrella Damm. His modern Jewish restaurant Mishiguene in the Argentinian capital takes its influence from his time working in Jerusalem and last year picked up the Highest Climber Award. Its raucous atmosphere, open parrilla grill and live music set the backdrop for a restaurant that is serious about its food, but less serious about itself. 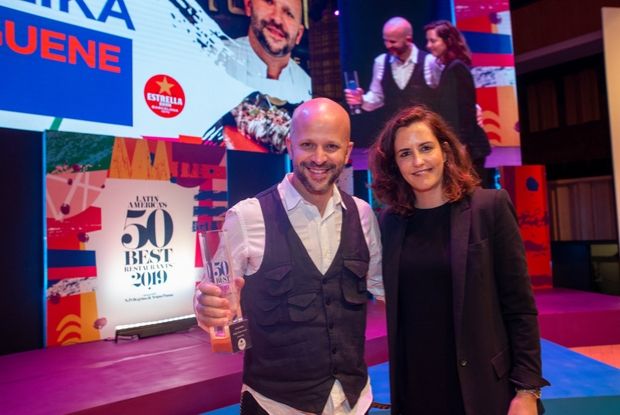 The globetrotting Chilean chef picked up Latin America’s Best Female Chef Award 2019. Her two restaurants in Santiago – which she runs alongside her business and life partner Rosario Onetto – show the perfect example of how a chef can be at the vanguard of their industry, while still keeping up with family life. Bazán’s acceptance speech said that she wants to inspire women in gastronomy and show how it’s possible to balance a career with motherhood. 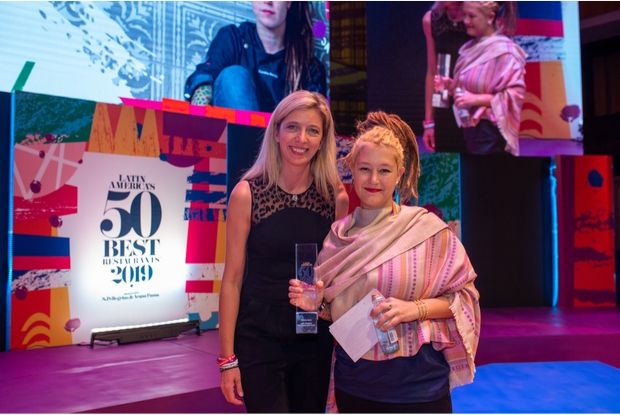 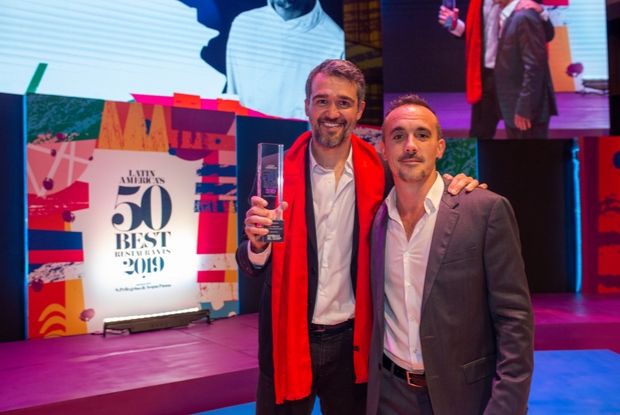 12. The Best Restaurant in Latin America landed in Lima for the seventh time

Chef Mitsuharu ‘Micha’ Tsumura’s Maido took the top spot for the third consecutive year. Now matching fellow Lima restaurant Central’s record three-year reign at the top of the list, the chef followed up his win with a speech thanking everyone involved with his restaurant. “It starts with my team, the producers and the fishermen who work together with us,” he said. “I remember in 2017 in Colombia when I won for the first time, I spoke about how good it was to be with everyone from Latin America. Since 50 Best began seven years ago, the most beautiful thing is that it has made us friends all year round.” 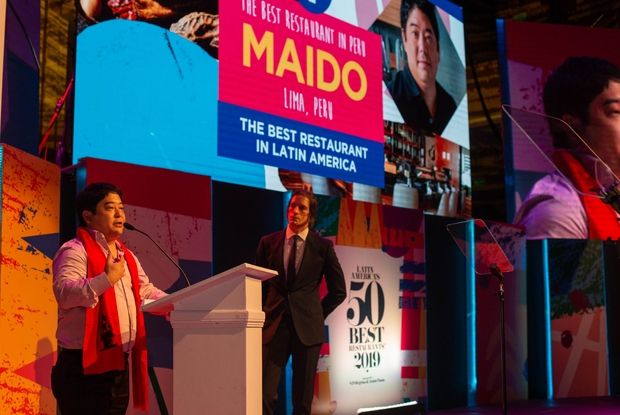 Latin America’s 50 Best Restaurants again brought together the finest in the region’s food scene for three days of pure celebration. The location for next year’s event will be announced soon, so stay tuned. 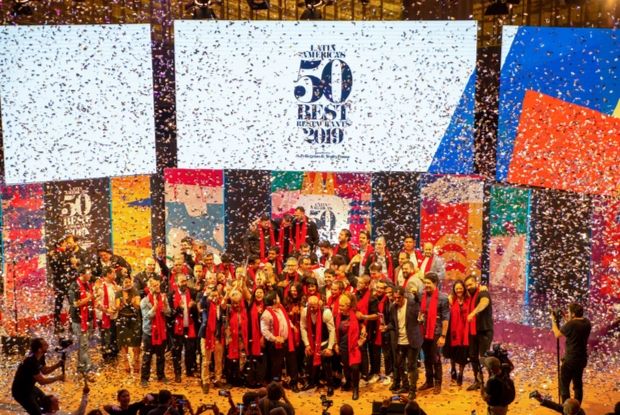 Now read what else Chef Tsumura said after taking the No.1 spot and check out the video highlights from the event below.