With Dignity Kitchen, a community food court managed by differently abled workers, Singaporean businessman Koh Seng Choon is changing the landscape of Asian hospitality. After being named a Champion of Change as part of The World’s 50 Best Restaurants 2022, Seng Choon tells 50 Best about his inspiration, latest projects and gives a glimpse into his one-of-a-kind kitchen

Step inside Dignity Kitchen and you’ll undoubtedly be met by a flurry of activity, the wafting aromas of chicken and rice, and if you’re lucky, a welcoming smile from Koh Seng Choon.

The 61-year-old social entrepreneur opened the venue – a 6,000-square-foot expanse with seven kitchens and communal seating – in 2010, and a sister site followed in Hong Kong in 2019. As a classic Singaporean ‘hawker centre’, Dignity Kitchen offers all manner of dishes throughout the day, from a morning kopi (a local variety of coffee) to a rojak salad with claypot rice.

However, it’s not the food that makes Seng Choon’s project stand out from the crowd – no matter how good the nasi padang might be. Dignity Kitchen is lauded as the first of its kind in Asia because Seng Choon predominantly employs people with disadvantages and disabilities.

“But it’s not just physical disabilities,” he explains. “We employ mentally challenged people, who may be suffering with depression, bipolar disorder or suicidal tendencies. Then there’s the socially disadvantaged: we take on abuse cases, newly reintegrated convicts and struggling single mothers. The fourth category is the intellectually challenged. We teach children and young people with an IQ of 70 or below.”

The kitchen is part of Seng Choon’s umbrella enterprise, Project Dignity, which he set up as a way of giving back to his community and offering people with disabilities a chance to support themselves and show the world their potential. 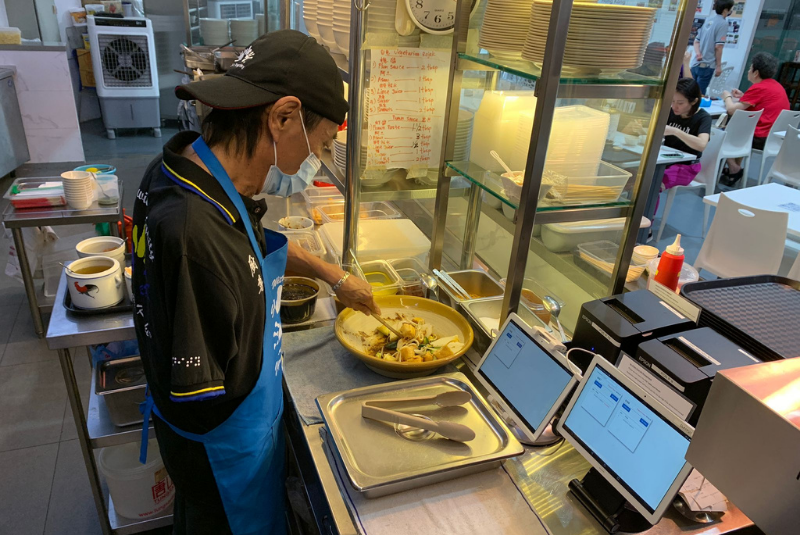 Before he turned his hand to social entrepreneurship, Singapore-born-and-raised Seng Choon left Asia for the UK to study a degree in Engineering and Business Studies. He spent 12 years in Sheffield, where he established a successful career as a management consultant, but returned to Singapore in 1994. The relocation prompted a new focus, as he was struck by the differences between his home city and his alma mater.

“Singapore is not like Sheffield. It’s much more clinical. You don’t see beggars, you don’t see homeless people, you don’t see children with disabilities. It seemed strange to me, given that the city’s population is around 5.6 million, but they’re kept inside – and that’s not right,” he says.

Committing himself to making a change, Seng Choon introduced a ‘Dignity Day’ to his schedule: for one day a month, he decided to do something good. “I approached elderly people on the street and offered to take them on outings. Then, I started another project where I worked with prisoners, helping them with studies for their O-Levels,” he says.

At the age of 50, Seng Choon took his altruism to the next level with the foundation of Project Dignity. “My mother and father always told me that in life, you spend your early years learning, earning your wages and your reputation. Then at 50, it’s time to give back,” says Seng Choon. He followed their advice to the letter.


Food is where the heart is

The flagship project that became Dignity Kitchen was a natural fit for Seng Choon. “I’ve always been inspired by food and cooking. It’s not complicated, especially if you know how the process works and you repeat it every day,” he says.

Knowing that he wanted to start a kitchen primarily staffed by disadvantaged people, Seng Choon didn’t need to look far for inspiration. Singapore is famous for its small, roadside food vendors, known as ‘hawker stalls’. Functioning as small businesses, hawker operators buy their own produce, cook and distribute meals and do all their own customer service. It was the perfect model, with one caveat: “There are no training schools for street food operators,” reflects Seng Choon. “So, we decided to develop our own. Ours is the first hawker training programme in the world.”

Dignity Kitchen now offers vocational training for its workers with disabilities with a course stretching from six to eight weeks, depending on how long each person needs to master the skills. The trainees learn three crucial areas of the hawker craft: food preparation such as chopping and peeling; cooking skills like frying and blending, and customer service, which covers everything from how to talk to the customer to how to wash plates and clean the tables.

This is only the first step of Seng Choon’s process – the next is employment. In Singapore, a staggering five out of 100 people with special needs have jobs, a statistic that the Dignity Kitchen founder is determined to change. “Since 2010, we have trained and placed around 3,000 people and we’re very strict on which job they’re given. It’s very important to us that they’re in the right position,” says Seng Choon.

His winning philosophy is based on battling preconceptions of disability, looking past people’s limitations and finding out what they can do. Take Peter, one of Seng Choon’s 160 present employees. Although he’s hard of hearing, Peter has become Dignity Kitchen’s resident kopi expert. Refusing to let Peter’s deafness inhibit him from making the most of his skills, Seng Choon placed a sign language guide next to the kopi stall, teaching customers relevant signals, such as ‘milk’, ‘tea’ and ‘sugar’. “Don’t teach [people with disabilities], teach the world. If everybody in the world learns just a little bit of sign language, it will help the deaf person to make coffee,” he says.

Champion of Change: Koh Seng Choon in a nutshell
Cause: Providing opportunities for people with disabilities in Asia through food
Effect: Setting up educational courses and community kitchens for disadvantaged workers in Hong Kong and Singapore
Achievement: Training and employing over 3,000 people with special needs and serving over 150,000 meals a day to the elderly
What’s next: Global expansion of Project Dignity to support the homeless and poor
Final word: “My mission is to return dignity to the disabled and disadvantaged and give them a vocation and a passion. I don’t have 160 people working for me. I have 160 families.”

Continuing his three-pronged master plan, Seng Choon then turned his attention to integration and inclusion. Housed in an open dining hall with communal tables, Dignity Kitchen’s layout encourages everyone to sit together, whether they’re young children, college students or the elderly. “That’s why food is perfect,” he says, “it brings people together. Everybody goes to eat in the same place, they learn from each other, and they learn to accept one another.”

His generosity extends beyond the walls of Dignity Kitchen. Supported by the ‘pay-it-forward’ scheme, which encourages guests to contribute as little as S$4 [approx. US$0.7], the teams are able to give away meals to the needy. “Every day we go down to the nursing homes to invite the old, the poor and the homeless to come to lunch, free of charge,” says Seng Choon. Taking it upon himself to unite the community, he also hosts events for local nursing homes, taking patrons on a city tour and treating them to a lunch at Dignity Kitchen. 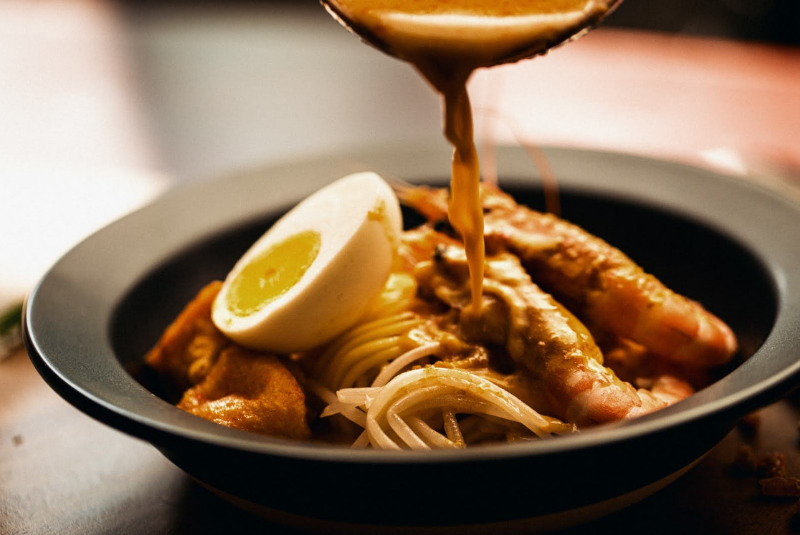 Making a difference outside the kitchen

Determined to give opportunities to as many workers as he can, Seng Choon is continually expanding the Project Dignity portfolio and creating jobs for the disabled and disadvantaged. One such project is Dignity Mama, found in a corner of the Singapore hawker centre. “This project is for mothers. When a child with disabilities is born, it’s obvious that you need to safeguard their welfare, but we also want to focus on the mother. Sometimes the father has run off, or they are struggling for money due to healthcare,” says Seng Choon.

Created to respond to this need, Dignity Mama is a second-hand book shop staffed by single parents and caregivers of children with disabilities. “Every month, we recycle thousands of books and at the same time, we’re giving employment to mothers who desperately need it.”

Another brainchild of Seng Choon is the ‘Dignity AI’ initiative. “It’s a robot,” he grins, “that’s manned by a paraplegic person in their own home. It’s great because all you need is a camera and 5G internet.”

By harnessing this technology, Seng Choon has employed paraplegics across the country, who log in via a server and are able to connect and control a corresponding device. “We have a robot in Singapore’s Dignity Kitchen and another one in Hong Kong, working in a hotel as a concierge,” he explains.

Throughout the pandemic, Dignity Kitchen and its sister projects had to pivot their practices. With the closure of restaurants and event venues across Asia, Seng Choon had to conceive new ways to keep his workers employed and the poor and elderly across Singapore and Hong Kong supported. The answer? Food delivery by electric wheelchair. “We are job creators. With my engineering background, I’m always looking for ways to solve problems,” he says. Nicknamed ‘Dignity on Wheels’, the team delivers takeaway meals to homes within a kilometre from the kitchen. 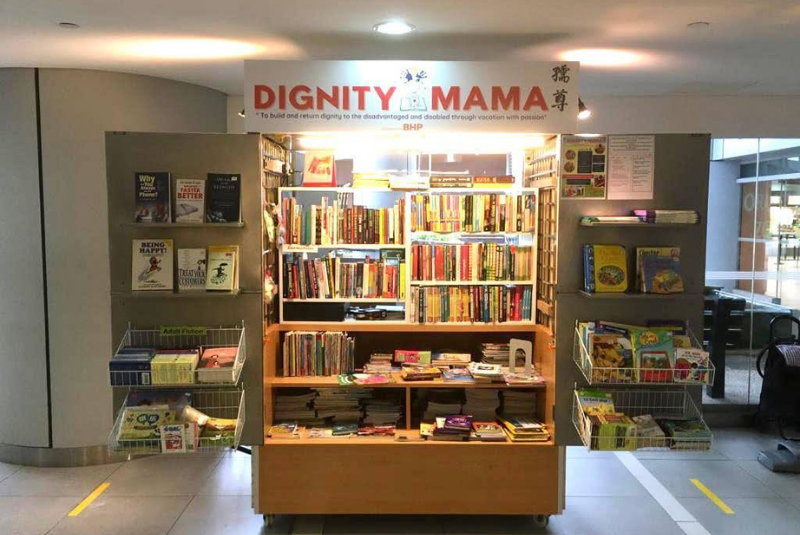 For Seng Choon, the last 12 years have been an incredible journey, but it was one with very humble beginnings. “The first three years were extremely tough. We were losing $800 a day just trying to keep the concept alive,” he remembers.

When he opened Dignity Kitchen’s Hong Kong branch in 2019, he was immediately met by the challenges of social unrest. “Hong Kong has a complicated market, but it’s the food capital of Asia. I thought, if I can make it here, then I can make it anywhere in the world, so I kept going,” he says.

Now with two venues, multiple subsidiaries and the knowledge that he has helped thousands of people with disabilities across Asia, Seng Choon still talks very humbly of his success. “Since 2015, we have been making a small profit and now I’m interested in the next phase – expansion and succession,” he says. Having considered many countries as the location for another Dignity Kitchen, such as Brunei, Taiwan and Vietnam, Seng Choon is keen to grow beyond his continent and bring the company to the UK. “The dream is to IPO,” he remarks, “I want everyone in London, Singapore and Hong Kong to own part of a social enterprise.”

As part of his vision to globalise Project Dignity, Seng Choon offers advice to other hospitality companies looking to diversify their workforce and to employ more people with disabilities. “The first thing you must do is to look at their ability, and you might find yourself being very surprised. You must understand that these people are willing and able to work, you just have to give them the opportunity.”

Champions of Change recognises and celebrates unsung heroes of the hospitality sector who are driving meaningful action and creating blueprints for a better world. It is part of The World’s 50 Best Restaurants 2022 awards programme, sponsored by S.Pellegrino & Acqua Panna, and the evolving 50 Best for Recovery initiative.