Gaggan Anand to close Asia’s No.1 restaurant in 2020

Gaggan Anand, chef-owner of the two-time winner of Asia’s 50 Best Restaurants, will close his eponymous Bangkok restaurant in 2020 to start a new venture in Japan. The Kolkata-born cook has been collaborating with chef Takeshi Fukuyama of La Maison de la Nature Goh in Fukuoka for the past year and says that after a decade of Gaggan he will open a 10-seater in the Japanese city.

Here he talks to us about the impact of being voted The Best Restaurant in Asia; his budding relationship with Chef Goh; and why the time has come for him to invest in fresh young talent in Thailand.

On the first year as No.1 in Asia:

Whether we’re No.1 or No.10, it doesn’t matter – if we’ve been given the responsibility of being the best restaurant in Asia, we just want to make sure that every guest feels it.

Every night before I go to sleep I look at Instagram. I want to see who checked in at Gaggan because that’s the most genuine platform. If I’m not at the restaurant, I can still see how the night went.

I’m happy with my team – they make me shine. There have been times in the last couple of years where I’ve sent my chefs a picture from Instagram and said their presentation was not good. If 95% of customers are happy, I think I’ve done the job.

The first year has been fascinating; there’s been a lot of attention. Suddenly India recognises me and gave me awards like GQ Man of the Year.

These awards also allowed us do what we want to do with the menu. Being No.1 gave us the platform to have more confidence in ourselves. So in the last year, me and my partner, Rajesh, have decided to be more bold.

The world is getting smaller and we have got bolder. Ten minutes ago I was talking with Jorge [Vallejo] from Quintonil; we’ve become friends. I also met Rodolfo [Guzmán] from Boragó in Chile.

On opening a new restaurant in Fukuoka:

In Japan, I’ll have a 10-seater restaurant, open only on weekends. I want to do something that has never been done and I want to be there. The only criticism is that I’m not at Gaggan every day and I can’t be – I’m not a machine. 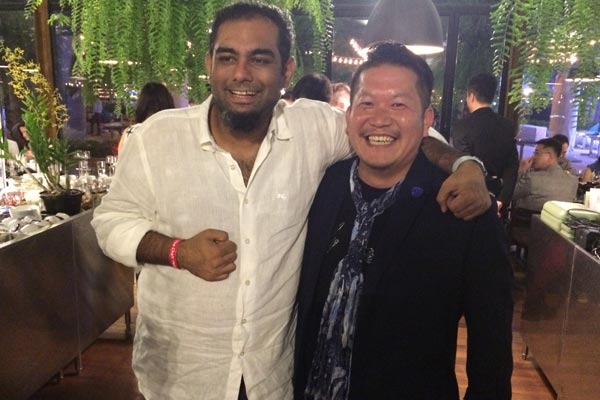 Goh is an interesting episode in our kitchen’s life. When I went to Fukuoka for the first time I was told I must go to [La Maison de la Nature] Goh. It wasn’t Michelin-starred but I was told he was one of the most famous chefs cooking French-Japanese food. You can’t get a table for two months.

Goh was the first chef I met from Japan who was so open. I told him I needed some plates and he drove two hours to Arita and took me to every porcelain maker. Today I have 20-30% of my dishes served on Arita porcelain.

When we created Goh and Gaggan together it was like Jimi Hendrix and Jeff Beck or the Beatles and Ravi Shankar – two very different worlds, telling an experience.

It’s not about two famous chefs, it’s about two people with similar minds. Thailand doesn’t have seasons so I need a place to go and create seasonal menus. Japan gives me that opportunity. We’re going to do GohGan three times a year – twice a year I’ll go to Fukuoka and once a year Goh will come to Bangkok.

On investing in new restaurants:

I’m becoming an investor in talent. It’s about young chefs who come to Gaggan – they cook and I see they have raw talent and I invest in them. That’s why I’m investing in other restaurants, like Sühring.

Sühring is run by two very talented twin chefs [Thomas and Mathias Sühring] from Germany. They came to me and I said they should have their own restaurant. I spoke to my partners and within about 24 hours we were a 49% stakeholder.

Sühring is a beautiful house in the middle of Bangkok, amazing-looking, completely different. They came up with new German cuisine.

Bangkok is such a multicultural country and this has now become a focus of fine food. We’re catching up with Singapore, Tokyo and Shanghai. Famous chefs are coming here with their Michelin stars and opening restaurants.