As she becomes the youngest recipient of the elit™ Vodka World's Best Female Chef Award at age 28, Cosme’s chef-partner Daniela Soto-Innes talks to 50 Best about her passion for people and plans for two new restaurants on the US West Coast

The day that Daniela Soto-Innes receives the news that she has been voted the World’s Best Female Chef, she is in Tulum, Mexico, celebrating her engagement to fellow chef Blaine Wetzel. She flashes her ring in front of her face, beaming. “I’m so happy!” It’s a coincidence that is not without significance – Soto-Innes and Wetzel met less than a year ago while in Bilbao to attend The World’s 50 Best Restaurants 2018 celebrations, and have since continued their long-distance romance between her home in New York and his on Lummi Island, Washington State.

“Ever since I met Blaine, I’m a lot happier,” she says. “The dishes taste better. I’m more inspired.”

It’s a typical statement from Soto-Innes, who initially grew up in Mexico City with a grandmother who taught her that food tastes better if you put love and joy into it. “You have to be happy when you’re making a mole or tamales – otherwise they won’t turn out,” she says. It’s a philosophy she takes seriously, paying close attention to her kitchen staff’s state of mind, cheering them up when they’re down and playing music and doing warm-up exercises with her cooks. 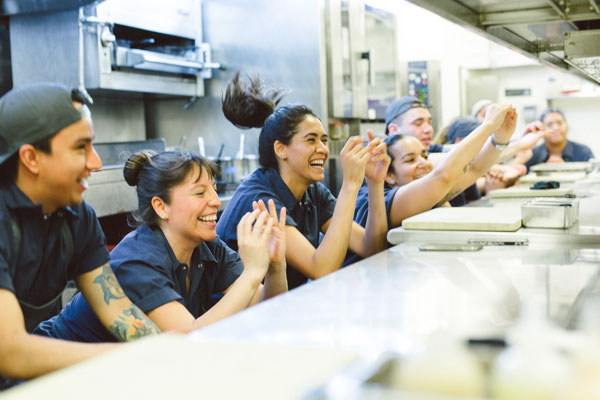 Soto-Innes’s buzz word is ‘happy’. She uses it profusely when referring to Wetzel, when talking about her restaurants, Cosme and Atla, when recalling her childhood, her two sisters and her parents, and her love of Mexican cuisine. But most of all, she uses it to refer to her team and the energy she expends to make sure her kitchen is not just functioning at a world-class level, but also a place where enjoyment and pleasure are paramount.

“When you are cooking at a restaurant that is high volume but also asks so much of you, it is very stressful sometimes,” she says. “But what makes it work is the individuals that come with a smile after working 10 to 12 hours a day, non-stop. Watching them dance and sing from the top of their lungs – I’m the proudest I could ever be for making someone’s life so happy while they’re doing their job. A career is one thing if it fits your soul and that’s what we’re doing here.”

But Cosme, where then-President Barack Obama once dined on a surprise visit, didn’t get to No.25 in The World’s 50 Best Restaurants just by being a fun place to work. Behind the happy, party-loving demeanour, Soto-Innes is a seriously ambitious, hard-working and talented chef whose skill – besides cooking – is in creating and maintaining a highly motivated team, whose personalities and strengths she nurtures on an individual basis. It’s an approach she learned from Chris Shepherd, “the biggest mentor that anyone could ask for” and the chef with whom she worked at Underbelly in Houston in her early 20s.

“You have to treat each person as an individual, not as a machine,” she says. “It is important for people with different personalities to follow the same path for a restaurant to work, but that does not mean that you have to change the way that they think in general. We embrace each person as their own but we also embrace Cosme as one thing that comes together by a lot of different people.” 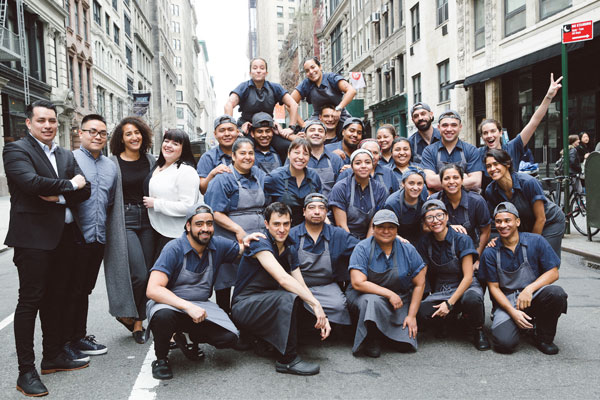 In Cosme’s case, those people are mostly Latin American immigrants to the US, many of them Mexican, some having fled the recent violence in Venezuela, others from as far away as Russia. Her Instagram feed is an homage to her team, and during our photo shoot, she insists on capturing all of her beloved staff, from her Mexican pastry chef and best friend, Isabel Coss, to sous chef and fellow Mexican Gustavo Garnica, and Venezuelans Valentina and Estefania Brito, two out of four quadruplets affectionately known as ‘the Chikis’.

“Cosme is not just a restaurant, it’s more of a cultural institution, a lot of different cultures coming together,” she says. “We might not know everything about cooking but we all strive to do the best we can, using the most knowledge we can collect between all of us. Cosme is somewhere where people from all cultures – Russia, Mexico, Colombia, Venezuela, Brazil – come to the US to make a little bit more money for their families. And they happen to come to a place where they actually enjoy what they’re doing, instead of being in a laundromat or being an Uber driver or having any kind of other job that you usually come to the US to do when you want to send your family money.” 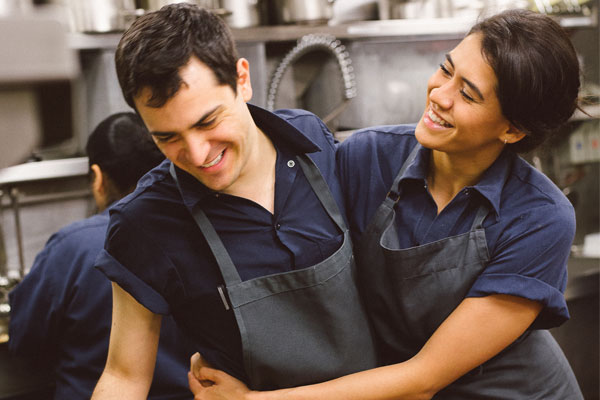 While she champions her fellow Latinos in New York, Soto-Innes did not move to the US to make money. The daughter of lawyers, she arrived in Texas from Mexico City at the age of 12. She was a competitive swimmer until the age of 20 and never intended to cook, but her family – in particular her mother, aunts and grandmother – gave her a taste of their passion for food that led her to start in kitchens in Houston at the age of 14.

“I grew up with a line of really strong women that love to cook,” she says. “When I was born, my mother was a lawyer with my father, but she wanted to be a chef because my grandma had a bakery and my great grandma went to school for cooking. Everything was about who made the best cake, who made the best ceviche, who made the best mole. I just knew that it was the thing that made me the happiest. What drew me to cooking was personalities and people and the story behind why they were cooking what they were cooking, more than the actual environment of the kitchen, which I didn’t like.” 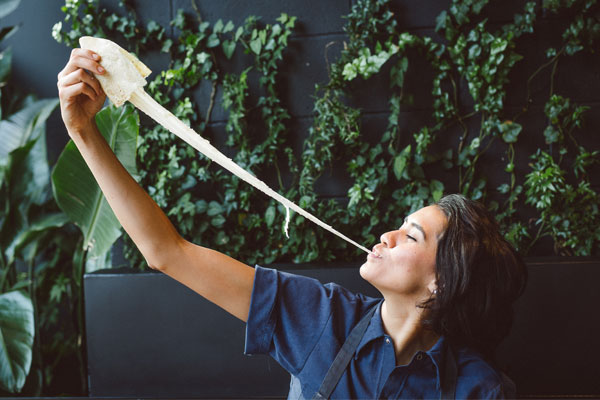 The food she ate as a child in Mexico and then Texas played a huge part in what she serves now at Cosme – a cuisine that she defines as “another state of Mexico”. While its basis is Mexican, the ingredients are often local or influenced by recipes she learned in the South. This plays out in dishes like abalone tostada, sweetcorn tlayudas with New York cheddar or flat iron steak with nixtamalized celery root. Her long-standing signature dessert, the showstopping, soft-centred corn husk meringue, is a reference to a childhood memory.

“My dad is a very big man, he’s two metres tall and he would pick us up from school an hour late in a sports car with a bag full of meringues,” she says. “The meringues were crushed and not very tasty, but just seeing our dad coming with sugar and us just grabbing the meringue and putting it all over our mouths was one of the best food memories for me.” 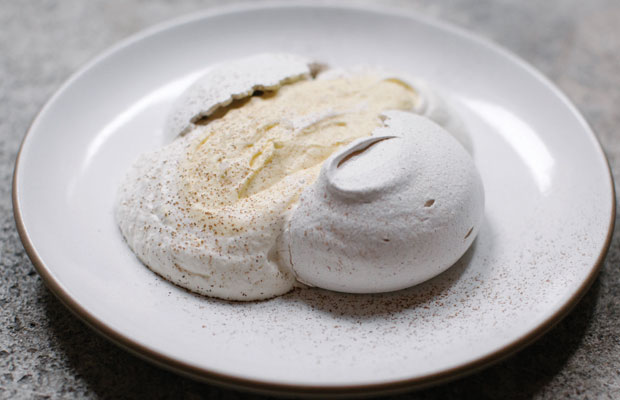 Meringue became a recurring theme when Soto-Innes went from being a sous chef in Texas to working at Enrique Olvera’s restaurant, Pujol, in the Mexican capital, where she made meringues all day long. Although she was tasked with something relatively mundane, she understood in her early career the importance of doing even the most menial tasks better and faster than anyone else, and the approach paid off. Olvera noticed her, and later picked her as chef de cuisine for Cosme’s launch.

“With the opening of Cosme, what we brought was good produce from Mexico, good organic corn, good mezcal, good people, and flavours that people weren’t necessarily used to,” she says. “We believed in ourselves and the food that we were making. A lot of people were confused about it but we weren’t – we made sure that we stayed focused and stuck to what we believed. Making food from your country when you’re not in your country is very difficult because you don’t have the support. But if you focus and do it with the best intentions and it’s delicious and you see people are having fun, then you should keep going.”

Not long after its opening in late 2014, Cosme began to receive accolades. While its success was first associated with Olvera, New York’s critics soon started to notice Soto-Innes, who won the prestigious James Beard Rising Star Award in 2016 at the age of 25. Three years on, she is now shortlisted by the same foundation for Best Chef in New York. She has opened neighbourhood Mexican restaurant Atla in New York’s NoHo, and is working on the launch of two side-by-side restaurants in Los Angeles, Damian and Ditroit, in partnership with Olvera. 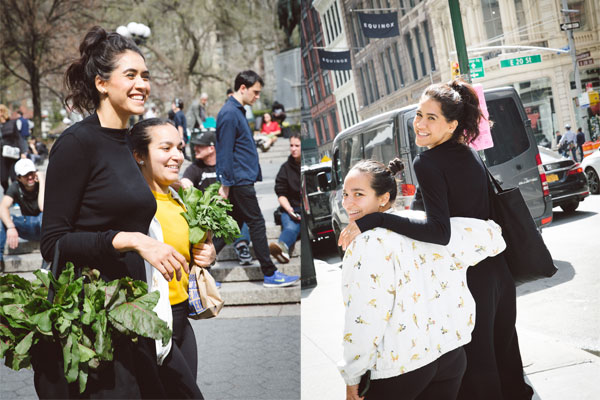 Soto-Innes on a market trip with Estefania Brito

Empowering cooks of all ages

“I’ve learned to not make work my life and to really enjoy the fact that I’m so young and to embrace that,” she says. “I’ve learned to empower the young cooks and the older cooks and that I shouldn’t be ashamed of my age at all. I should embrace it and I make sure that everyone follows their dreams. I’ve learned not to take work sometimes as seriously as I was taking it, but also making sure that I have a balance at all times. Because two restaurants can consume you, and sometimes when I’m really stressed out, somebody like the Chikis or Isabel or Gus will just laugh at me a little bit and then they take the load off.”

Soto-Innes says she has also learned to simplify her food, cutting out ingredients instead of adding them as she did as a younger cook. She acknowledges she is still “naïve” and open to learning from her mentors, whether that is an 18-year-old line cook or a 60-year-old “tortilla lady”.

“Both older talent and young talent deserve all the respect at all times, and we should be able to hear what has to be said. It doesn’t matter whether you’ve been cooking 40 years or one year. There are cooks who weren’t even cooks when they joined me a year ago, and they’ve taught me a lot more than what I knew when I was 14.” 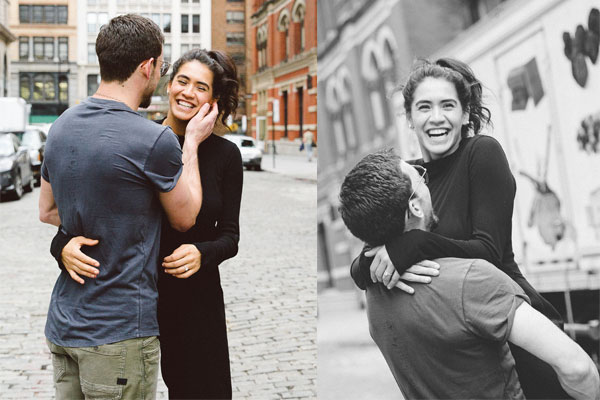 Before she reaches 30, Soto-Innes will have opened at least four restaurants, including Cosme, Atla and the LA duo, scheduled for late 2019. Ditroit will be a taquería, while next door Damian will be Japanese-influenced Mexican, though she says she and Olvera “always change what we think it’s going to be the minute we start cooking”. She’d also like to open a bar some day with Wetzel, who runs the acclaimed Willows Inn on Lummi Island. But for now, she is concentrating on running her New York restaurants while Wetzel plans the wedding in Tulum.

“We’re shooting for February but we don’t know – maybe a restaurant will get in the way!” she says. “Blaine is already becoming a bridezilla. He’s funny… he’s super excited and sweet and very keen so he wants to make sure I sit down and tell him a date. He’s like ‘you can open a restaurant but you can’t plan a wedding?’ I’m like ‘no, you can be the wedding planner’.”

Watch the video with Daniela Soto-Innes at Cosme:

Now go behind the scenes on the 50 Best shoot:

Soto-Innes will receive the award in Singapore on Tuesday 25th June at the awards ceremony for The World's 50 Best Restaurants 2019, sponsored by S.Pellegrino & Acqua Panna.