10-hour sardines, sanitiser and 'wow moments' – how The Clove Club emerged from lockdown an even better restaurant

After nearly six months of pandemic-induced closure, Isaac McHale’s The Clove Club in London – No.27 in The World’s 50 Best Restaurants 2019 – started welcoming guests again on 1st September. 50 Best's Deputy Content Editor, Giulia Sgarbi, shares an account of how the fine dining restaurant has evolved to create a safe and delicious dining experience

In the age of Covid-19, the idea of dining out – even for hardened restaurant lovers – can come with a side-serving of anxiety. And while it’s essential to follow the guidelines set out by the experts, as well as adhere to local government guidance, these concerns are eating into one of the key reasons for eating out: that, at its core, it should be an enjoyable and relaxing experience.

These are just a few of the thoughts going through my mind as I exit The Clove Club, having just experienced three hours of uninterrupted gastronomic bliss. Since reopening on 1st September, I am left in no doubt that the restaurant team has found its feet and adapted to the strange world we’re currently living in, and has come back stronger than ever.

“Oh, the hours and hours of the world’s brainpower that have been devoted to coronavirus,” jokes chef-owner Isaac McHale, who co-founded the restaurant with Daniel Willis and Johnny Smith in 2010. But here, Covid is no laughing matter. “We’ve had months of rigorous planning,” he continues. “We use HACCP, Hazard Analysis Critical Control Points, a system developed by NASA to identify risks and critical control points in any procedure.” 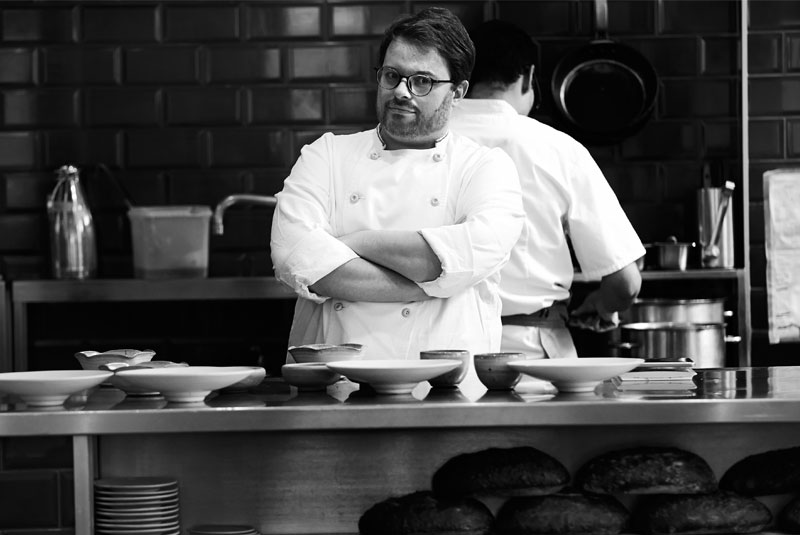 In practical terms, this translates into many of the tropes we’ve grown accustomed to in recent months: you are greeted by the mask-clad front of house team, who check your temperature while you – of course – take advantage of the hand sanitiser, and there are special procedures in place for anyone who would like to take extra precautions. “We have a dedicated guest relations manager who lets people know what to expect, and we can make sure that these guests are seated in the bar, where there is much less movement, rather than the dining room,” says McHale.

In the dining room itself – splayed with light on a sunny afternoon – the feeling is one of merry revelry, with small groups celebrating birthdays and couples sipping on glasses of sparkling wine. The spacing of the tables (the restaurant has gone from 50 to 35 covers) doesn’t dampen the feeling of expectation that sitting down in front of the immaculate table setting and crisp napkin immediately affords.

“I’ve spent my life wondering whether what we do is good enough, thinking about what we need to improve every day,” reflects McHale. “So I've been nervous coming back, wondering if people would be interested. But actually, it's been great to see the smiles on people's faces and it's been great to make them happy again – that's the reason we do this crazy job. We're very happy to be back.” 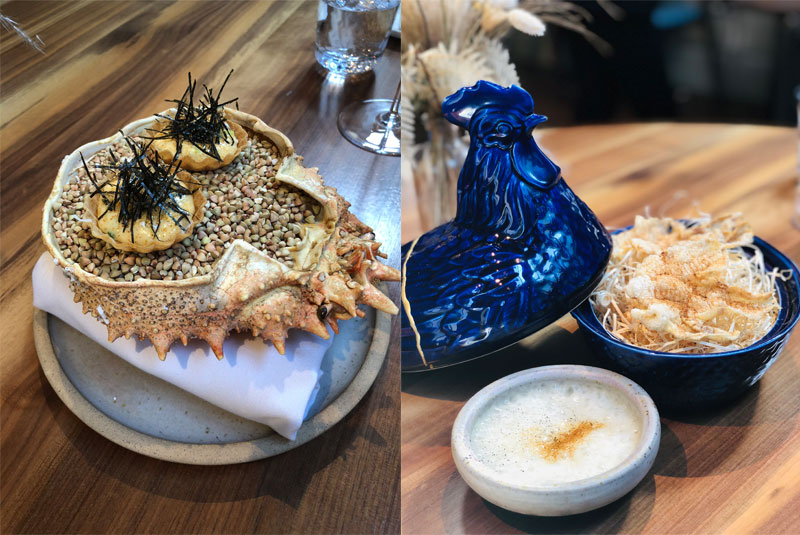 As soon as I’m biting into the first snack – The Clove Club’s emblematic crab tartlette, presented in a crab shell filled with sea gravel – I feel in sync with McHale: here I am, smiling at this creamy, moreish bite in my first visit to a 50 Best restaurant since lockdown, just as he had predicted.

The restaurant’s chef-patron was born in the Scottish archipelago of Orkney, then moved with his family to the city of Glasgow, showing an inclination towards cooking in his early years. It was while in Glasgow that, for his seventh birthday, McHale asked his parents to have a little party at home. The only difference: he wanted to cook for his friends himself. And he wanted to make pakora.

The young McHale blended his own mix of Indian spices, studied to find the best butter, and decided that his version of the Indian snack would be made with fish, rather than vegetables. The pakora starter on The Clove Club’s menu has been in a process of constant refinement for 30 years, appearing occasionally as a main course, and packs all the flavour than any dish improved over more than three decades should. The perfectly fried, crispy pollock fillets are served with a yoghurt dip whose bracing acidity is a perfect complement. 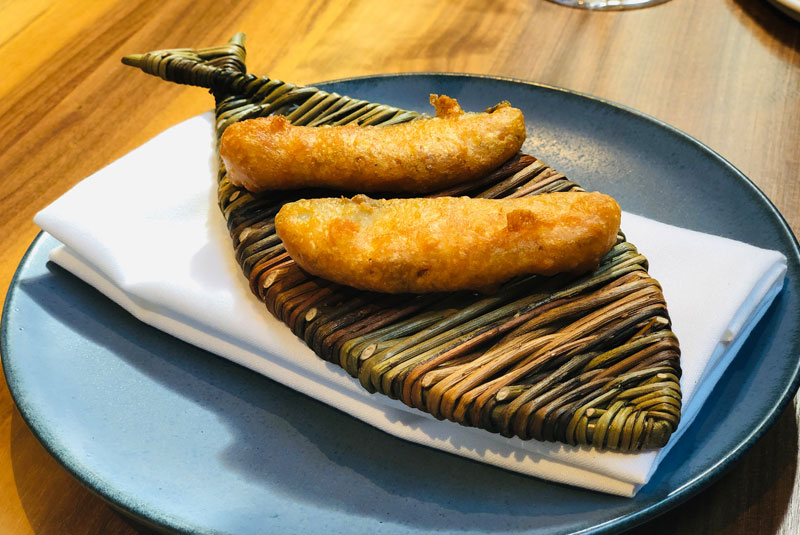 In creating his dishes, McHale seeks to inspire what he calls ‘wow moments’. “Sometimes, you’re just eating, and it’s nice and you’re chatting. Some other times, you taste something and you just look up and go ‘wow – that’s really good’,” he says. He has had a few of these moments himself in restaurants around the world, although he admits that it’s hard to have one ‘wow moment’ in a meal, and extremely hard to have several – “but when you can do that, the meal goes down in history for me,” he adds.

The dish that makes me stop in my tracks is the hot smoked Wiltshire trout, with almond milk, watercress and Petrossian caviar. “I always thought we would be a technique-focused restaurant, but I realised that we are a product-focused restaurant, followed by technique and degree of cooking,” reflects the chef. “For the trout, if it were cooked for 15 more seconds, it wouldn’t be the same. But when you get it to just the right degree of cooking, it’s warm, but still lightly raw in the centre. That’s really important.” 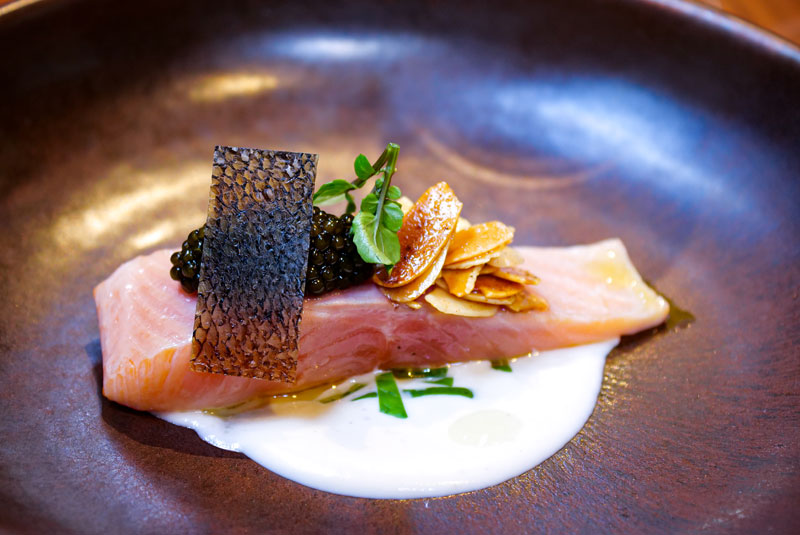 As the dishes come and go, The Clove Club’s front of house team gets their chance to shine. When my lunch partner leaves the table for a few minutes, someone immediately comes over, delighting me with stories about the restaurant and McHale himself. This is how I first hear of the chef’s obsession with sardines.

In the UK, he highlights, sardines are usually fished, put into a can, and forgotten about in a cupboard. On his return from a trip to Japan, however, McHale simply wouldn’t stop talking about sardines. After much work to bring it to life, this dish has become the chef’s highlight – his own ‘wow moment’. It’s a sardine sashimi served over a potato crisp, topped with little dollops of mustard and Worcestershire sauce, and criss-crossed with a striking pattern.

“The sardine dish is very time consuming,” explains McHale. “When it’s on the tasting menu, we’ll spend 12 hours a day deboning the fish and peeling off the skin – all to get ready for that top element that is the cross, which isn’t just presentation to score upgrades. It’s to cut through any remaining bones, that get cut so small you don’t notice them. People think sardine is a strong-tasting fish, and some might not like that. But then they taste it and go: ‘wow, it tastes like butter’, and that’s also thanks to its amazing texture.”

Mouthfeel and flavour are the two cornerstones of The Clove Club’s modern British cuisine. The former is exemplified in both the hot smoked Wiltshire trout and the sardine sashimi. To illustrate the latter, McHale refers to the smoked sardine and whisky broth served alongside the sashimi bite. “With broth, you have nowhere to hide – it’s just flavour,” he says. “It’s not about whether it looks nice, if it's the right size or shape, the right colour, or if it's chewy or soft. There's nothing else in the liquid, so flavour becomes people's focus.” 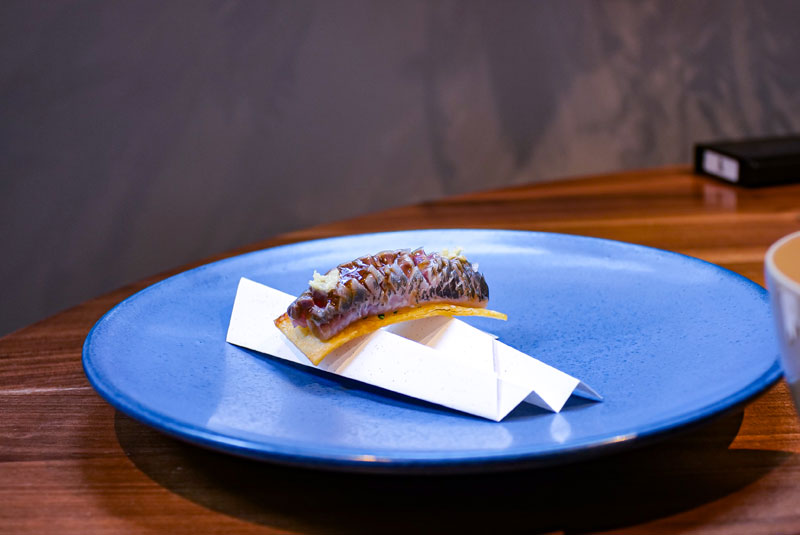 As the meal continues, we are treated to mackerel sashimi with white radish and heritage cucumbers, served with a vinegar sauce so delicious I would happily drink it on its own; gently cooked Orkney scallops with Perigord truffle and sansho pepper covered in a potato butter sauce; and hazelwood grilled red mullet with a guindilla, olive and green peppercorn hollandaise. The final two courses focus on meat, with a dry-aged loin of pork (the most tender cut of pork I’ve ever eaten, thanks to the dry-ageing process) served with ‘modern ratatouille’ and a dish of wild Althorp Park fallow deer with celeriac, cocoa and chanterelle that revives a feeling of nostalgia for autumn evenings sitting in front of a fire.

Much like in the third act of a film, where tension and excitement comes to a final resolution, the desserts are our wrap-up moment, preparing us mentally for the end of the meal. The caramel ice cream is a highlight, slightly melted on a spoon over hot stones before being lodged comfortably on a warm potato mousse with coffee meringues.

“The period of lockdown has given everyone an opportunity to evaluate the things they hold dear, the things that make them who they are, that give them a sense of worth and enjoyment in life,” says McHale. “People don’t realise that back to normal isn’t coming. So it's about figuring out how to limit the risks, do what you feel safe doing, and go to restaurants where people are taking every care they can to make you safe.” 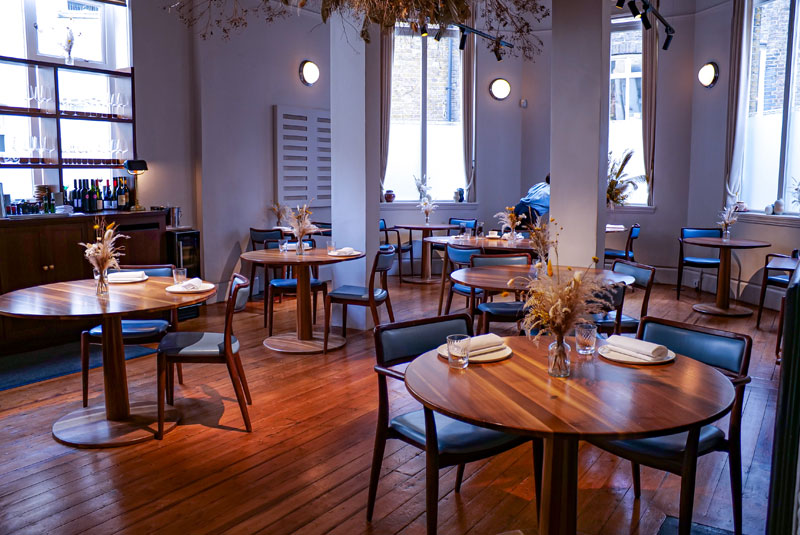 There is one question that has been on the chef’s mind since long before he opened The Clove Club: what makes an amazing meal? “There are restaurants that by their remoteness, by their unique location, have a head start in that you’re signed up, you’re excited, and you build up expectation as you travel there,” he reflects. “How is it possible to do this with a city restaurant, where you can call up your friend and meet there in an hour? How could that ever be as good a meal as the one you’ve been building up to for three months?

“For me, it’s about creating a ‘wow moment’ scenario, about precision and skill in cooking, about having amazing produce and figuring out how the best way to get flavour out it, while keeping the mouthfeel in mind.”

The Clove Club is certainly achieving what McHale set out to do. But right now, after the months of lockdowns and bad news, just being able to be back in such a restaurant brings joy. To make small talk with the expert front of house team, to witness the hypnotising rhythm of the open kitchen, to experience new and unexpected flavour combinations, and to know that your safety is in the hands of a capable team, is all the wow factor this writer needs.

Visit the Restaurant Recovery Hub and the Bar Recovery Hub to explore useful resources during the coronavirus pandemic and read the stories of chefs and bartenders around the world. Follow 50 Best on Instagram, Facebook, Twitter and YouTube for the latest news and videos.