Sustainability: “This is just the beginning”In conversation with the Locavore chefs

When Eelke Plasmeijer and Ray Adriansyah set out to open a restaurant on Bali that would focus on local Indonesian produce, they were surprised to be among the first. It was 2013 and the revolution that has seen an increasing number of restaurants move towards native ingredients in dishes was still a long way from the island's shores. Though quite quickly, Locavore began to demand attention.

“We were just cooking the food we liked to cook, playing the music we liked to play and having a bit of fun. We never thought this would happen,” says Plasmeijer. His and Adriansyah’s restaurant has now been voted into four editions of the Asia’s 50 Best Restaurants list, picking up the Highest Climber Award in 2017 and, most recently, the Sustainable Restaurant Award.

Locavore – which is defined as a person who only eats local produce – opened with a vague ideology. “When we launched we wanted to cook with local ingredients, but a lot of them were actually western in origin,” says Plasmeijer.

“Then, slowly, we started to realise that there was nothing local about that. We started to move in the direction of using more ingredients from the Indonesian islands. We thought ‘who comes to Bali to eat salmon, scallops and foie gras?’ Most people can get better where they’re from.”

It was a realisation that set the Dutch-Indonesian chef duo on a journey of discovery of the local archipelago (which numbers a mind-blowing 17,000 islands) and, thanks to its tropical climate, an incredible natural diversity. “Now, we use a lot of local seafood, veggies, flowers and leaves that grow in the wild,” says Plasmeijer. “We are lucky that we can use ingredients that people don't know, and that has made the restaurant a much more interesting experience.”

This led to the creation of Locavore’s two tasting menus, one vegetarian and one featuring some meat and fish, both of which are completely dairy- and gluten-free. Plasmeijer explains that this wasn’t done on purpose: the menu was simply a result of the produce they sourced, 95% of which now comes from Indonesia. Even within the ‘Locavore’ menu, animal protein takes a back seat, with produce such as carrots or cabbage primary ingredients. 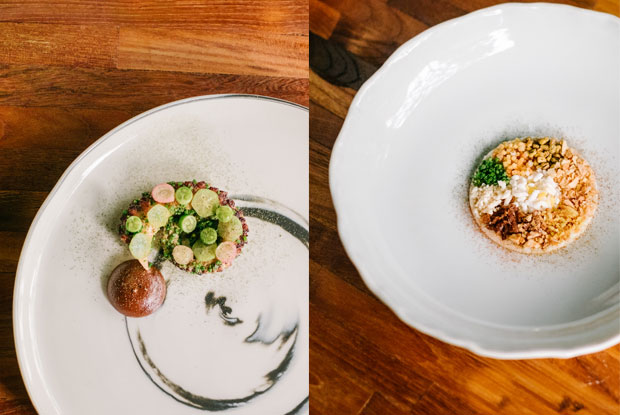 But with a country as big and geographically varied as Indonesia, the problem for the chefs became where to start. Plasmeijer and Adriansyah decided that they wanted their cuisine to be authentic Indonesian – so they started to look in the locals’ kitchens.

“When we made the switch to more authentic Indonesian products, it became a bit more difficult [to source them] because most farmers grow the western ingredients that hotels want to buy. We told them we wanted to use the same ingredients that your grandparents would use,” says Plasmeijer.

For them, this meant creating a network of suppliers travelling into the jungle, the fields and the mountains around the town of Ubud in Bali – where the restaurant is located – and beyond to research new products, as well as to study traditional uses of common ingredients. Eventually, this became a formal part of the restaurant as the Jalan Jalan project, under which small teams of employees regularly travel and explore different Indonesian islands to source and forage new ingredients as well as to learn traditional cooking techniques.

As its sustainable ethos developed, Locavore’s layout changed accordingly. Starting as a 14-table restaurant, it now also counts a bar, a deli and a butcher shop. Called Local Parts, the butcher’s was born from the will to use every part of the animals the chefs bought and now also sells their air-cured sausages, pâtés and cold cuts to the public.

As they researched further into the country’s cuisine, the duo also opened an authentic Indonesian restaurant, called Nusantara. Above this is LocaLab, a test kitchen and food laboratory “where we have four people coming up with new dishes, working on other long-term projects and trying to make the most of our waste,” says Plasmeijer. 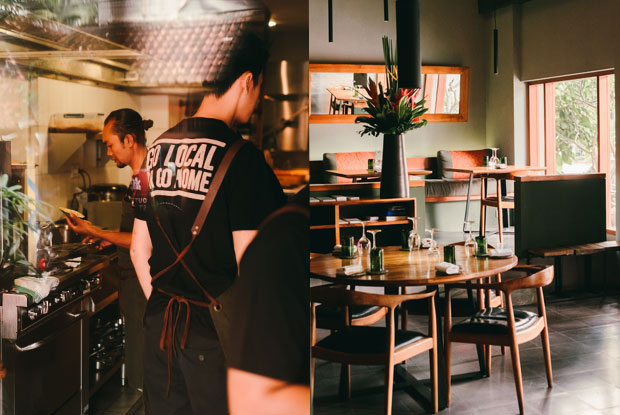 At Locavore, the chefs have come up with a manifesto that encourages the reduction of waste – organic refuse is fed to pigs or composted for the vegetable garden; leftover proteins are made into garum, a fermented sauce; while citrus peel is turned into detergent and leftover stems are made into a herb salt. This is what Plasmeijer and Adriansyah call “trash cooking”, which is encouraged at Locavore via internal workshops and tested at LocaLab.

But the chef strongly feels that not enough is being done – on the island or at his restaurant. “If you go to the beach at the wrong time of the year, it's swimming in plastic. We call this a paradise island, but it's not,” he says. “We have many issues here in Bali with overdevelopment and all the problems that come with it. Waste, water levels that are dropping way too fast... Recycling has been addressed in recent years, but in many cases I think it’s just a PR effort.”

Plasmeijer also sees the restaurant winning the Sustainable Restaurant Award as a starting point, rather than an ending to the story. “I’m stoked, but we’re just getting started,” he says. “We are really making efforts, but if we are making the most effort out of every other restaurant [in the Asia’s 50 Best Restaurants list], then there is something wrong with the others. We are not a ‘perfect’ restaurant – we are sustainable, but I know how much better we can do.”

Among the improvements that Plasmeijer is planning is the idea to take Locavore off the grid and make it completely self-sufficient – the restaurant’s roof is already covered in solar panels that supply half of the restaurant's energy. On the other hand, the chefs also want to raise awareness around Indonesian cuisine and are thinking of opening restaurants in Jakarta and even Amsterdam.

The Sustainable Restaurant Award is given to the restaurant with the highest environmental and social responsibility rating, as ranked by audit partner Food Made Good Global. All restaurants on the Asia’s 50 Best Restaurants list are invited to enter the award via self-nomination and each is assessed across three main pillars: sourcing, society and environment.

Header images: Ray Adriansyah and Eelke Plasmeijer receive the Sustainable Restaurant Award for Locavore; their dish 'Into the sawah'

Catch up on all the highlights from Macao at Asia’s 50 Best Restaurants 2019, sponsored by S.Pellegrino & Acqua Panna: