Return of the Jedi – Gaggan Anand is back

The world’s most successful Indian chef is back in the game, with his latest Bangkok restaurant winning the Highest New Entry Award, sponsored by Aspire Lifestyles, as part of Asia’s 50 Best Restaurants 2021. Anand joins 50 Best to talk Star Wars menus, getting fit, fighting depression, an addiction to fame and cooking some of the best food of his career

It’s been a big 18 months for Gaggan Anand. In August 2019, he shuttered Gaggan, the Bangkok restaurant that won The Best Restaurant in Asia title on a record four occasions. Just two months later, he phoenixed with Gaggan Anand restaurant in another part of town. In February 2020, he separated from his second wife, Pui. In March 2020, Covid struck. One year on, in March 2021, his new restaurant landed at No.5 in the Asia’s 50 Best Restaurants list, picking up the Highest New Entry Award, sponsored by Aspire Lifestyles. It’s been a breathless period, even by Anand’s own tumultuous standards.

“People were saying ‘He’s back! Where has he been? He is back from the dead!’” Anand opens. “I didn’t go anywhere; it was just the transition of one restaurant to another.” Resurrections aside, there is a lot to unpack from the chef’s recent journey.

The first thing to note is that Anand looks well. He has lost weight, his face is taut and his olive-stone-brown eyes sparkle with the mischief that made his name through emoji menus, hard rock and a unique irreverence with food that cannot be taught at culinary school.

Has he joined the legions of neighbour-bothering fitness advocates churning through HIIT workouts in his front room? “It’s the drums!” he says, flipping the Zoom camera to focus on the eight-piece drum kit in the corner of his apartment. “I burn about 800 calories an hour when I beat the hell out of it.” He channels Dave Grohl – “the best drummer there’s ever been” – and one presumes the residents in adjacent accommodation long for the rumble of burpees and jumping jacks. 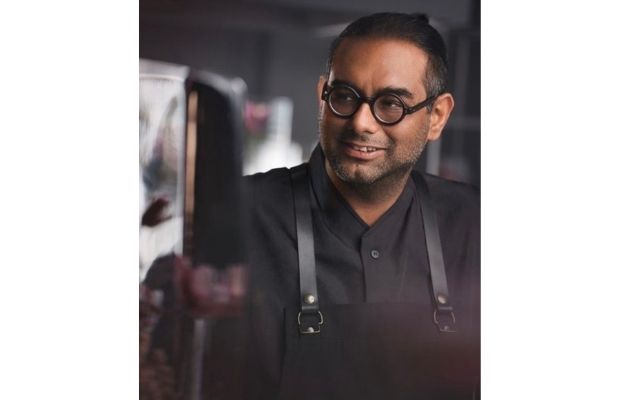 “When I got divorced, it could have gone one of two ways,” Anand says. “I could have sat on my arse eating French fries, burgers and pizza, but I decided that would be a bad idea. I started eating healthy and wanted to look after myself better than I had. Immediately when lockdown began I got very depressed and starting posting a lot of depressing shit. I needed to flip out of it and exercise and eating well worked for me. It made me happier almost instantly and I started feeling that desire to get at it again.”

Same, same but different
The Covid situation in Bangkok has fluctuated wildly. Thailand closed its borders and all public spaces in March 2020 and was heralded as one of Asia’s success stories in combating the virus. The death count was low, but its knock-on effect to daily life was profound. “There is no government support here like in first-world countries,” says Anand. “People do not cook at home; everyone eats out. The lockdown hit every section of the population and there were a lot of people who did not know how to act.”

Fast-forward to April 2021 and virus cases in Thailand are on the rise. Various degrees of lockdown have been instigated and, as is the case across the globe, hospitality bears the brunt of the restrictions. “Business picked up immediately after the 50 Best ceremony, but recently it’s just dropped away,” he says. “This virus is like a game of cat and mouse. The moment you drop your guard, the moment you are non-vigilant, it takes back control. Nobody is responsible for this; we cannot blame anyone. I just hope that everyone gets the vaccine and that in 20 years’ time we don’t start growing a tail.”

Anand’s split from his former financial backers is well documented.  When Anand resigned from Gaggan on 25th August 2019, he lost the rights to the restaurant’s name. On 1st November in the same year, Gaggan Anand restaurant opened in the east of the Bangkok, roughly a mile from its original location. 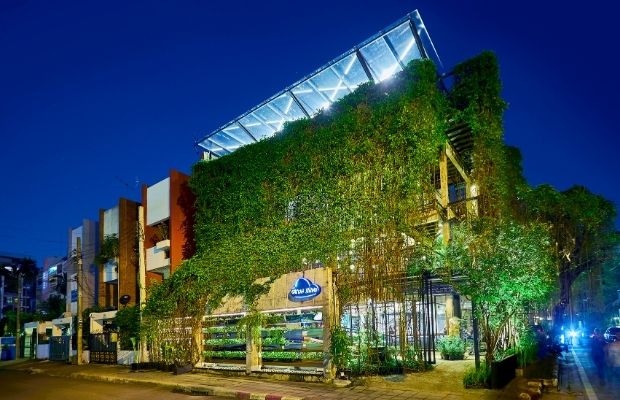 Even the most rapidly arranged fine dining restaurants can take over a year to fit out, design and plan the opening menus; Anand accomplished it in two months flat. “I thought of it as a challenge and treated it like a puzzle,” he says. “Everything has a timeline and I didn’t want to lose momentum at any stage. Because I’ve been here for over 10 years, people helped me solve problems. I also used the right manpower – F&B is all about manpower – and we made the correct strategic decisions. I thought not to control costs, but rather go on timelines. And we met those timelines every step of the way.

As it stands today, the restaurant runs a nine-course lunch menu for 2,000 baht ($70). The tasting menu, previously priced at 12,400 baht ($400), is now 4,300 baht ($140) and the current average spend on a la carte in the restaurant is 3,100 baht ($100). Anand cooks most services and puts on the performance that most diners come to see. “I’m famous for talking out my menu and my personality comes out in the middle of every service,” he says. “This is where the current identity stems from: me and my team’s creativity. We are acting out fantasy, but at the core of it all it must be amazing food – it is not a Disney studio.”

Perhaps not a Disney studio per se, but Disney still has a hand: Anand has just launched Gaggan S-Wars, a Star Wars-themed experience that will run at the restaurant until 16th June. “We will be revolving these themes every three months or so and I’m currently planning the next one, which will be around Harry Potter. I want to keep the innovation fresh.”

It’s in concepts such as these that we see the real Anand. Free to let his imagination run wild, he is creating plates similar to those which stunned the world when he burst onto the scene in 2012, picking up the No.10 spot in Asia’s 50 Best Restaurants in 2013 for Gaggan.

“Just because we’re doing a Star Wars menu doesn’t mean I’ll be dressing like a Jedi or using plates shaped like Yoda. Yes, there’s a light show, yes, there is illumination and we are blowing a few things up, but my ideas for the food come from all aspects of the five decades of Star Wars.

“The first course is our ‘Space Cookie’, slightly sweet and savoury. The next is set in The Dune Sea and Jabba’s Palace, which features two types of roti – Indian and Thai – cooked between two hot stones,” he animatedly explains. “Then there’s the Forest Moon of Endor, which is basically white asparagus, caviar and Hollandaise; a classic, but given a fresh spin with some Endor surprises. The next is a relatively simple roasted pork dish that’s inspired by my daughter playing with a lightsaber.” The Force is strong in that one, no doubt. 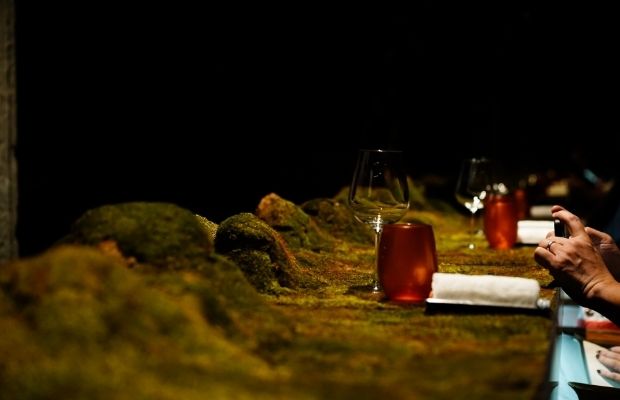 The dinner is set on a table strewn with moss to represent the planet of Endor. As Anand talks, his passion is palpable: anyone thinking that his culinary creativity had gone off the boil is mistaken. Recent menus represent Anand at his charismatic and imaginative best.

A future for fine dining
Across the global restaurant sector, discussion is rife about what fine dining will – and indeed should – mean in a post-pandemic world. Many see it as an opportunity for change and chefs and restaurateurs are taking the tentative first steps into an almost dystopian restaurant landscape. “It seems right now that a classical, luxurious fine dining restaurant with all the prestige that comes with it is kind of offensive,” says Anand. “Guests who eat in my restaurant are afraid to post pictures on social media because they fear being blamed for enjoying themselves when others are not able to participate.

“The new luxury is just to eat good food in a good restaurant; it could be a burger, it could be a steak, it could be fried noodles. It’s important for people to feel normalcy in a good meal, being close to friends… People’s choices are changing. They want to eat comfortable food.

“We listened to the voices that said we were overpriced and I have just finished a lunch service for 25 people [the restaurant’s capacity has been restricted to accommodate social distancing]. People are just not spending three hours over a meal; Covid doesn’t allow it.

“A fine dining menu can no longer be a chef’s postcard. A takeaway chocolate or something luxurious to end the experience will not stand up in the future. Eleven Madison Park taught the world a lot about interacting with guests and I believe it is the direction [connecting chef and diner] that will take hold. Massimo [Bottura] is a master of this art and this will represent the future of fine dining. It will not be big restaurants that show us the way; it will be small tables, small restaurants and chefs’ counters – these will dominate the fine dining scene in the years to come.” 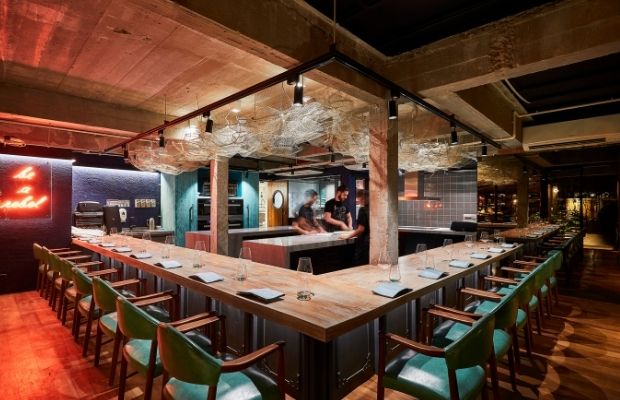 Anand is keen to reference his contemporaries and is complimentary about how they have responded to the pandemic. He pays cautious homage to the hiatus lockdown has afforded to what was a gruelling travel schedule featuring scores of long-haul flights each year. “For a lot of us, it has given us ourselves back,” he says. “I started being healthier; more physical. This period has made me realise that we did not have enough chance to reconnect with ourselves as people. Chefs like me were machines that were made famous and when we got that fame, we did not know how to control it and we got addicted to it.”

It’s clear that a weight has lifted from the chef’s shoulders. “Even though I’m losing money as a restaurant owner and have come back as a rebel who went solo, I don’t regret it. I know deep down that there is a big prize in the end waiting for us and winning the Highest New Entry award this year showed us that we were right to have this belief in ourselves.”

How this belief manifest itself on the plate, we are only just beginning to get sight of. “I feel like I am cooking the food that I want to cook,” says Anand. “For the 50 Best awards this year, it was 50 times less stressful than waiting for the ranking in 2019. For this year, my countdown began at 50 and when I was announced the happiness felt pure; exactly the way that it had be when we first entered the list in 2013.

“Life is a circle. You start from nothing and then you go on a path which appears to be your destiny, but becomes your curse. Winning all those years lost me a lot of friends, but when I was No.10, they loved me. I feel back in that kind of place right now.”

When it comes to looking further into the future, Anand is sanguine: “I do not know if I will be successful; I do not know whether I will fail. But today I live with respect and most importantly, I’m a much happier and contented person.”