Hélène Darroze on new restaurant Marsan, being inspired by her childhood and respecting the product

Just days before reopening her flagship restaurant in Paris, chef Hélène Darroze takes a few minutes out to reflect on her heritage, opening a restaurant in her fifties and why she was voted The World’s Best Female Chef at exactly the right time.

Hélène Darroze made her first apple pie at the age of six. By age 12, she was baking lemon tarts for her parents’ dinner parties. At 32, she opened her eponymous restaurant on the Left Bank in Paris, followed by another opening in London in 2010 – Hélène Darroze at The Connaught – and comfort food bistro Joia by Hélène Darroze in Paris in 2018. Along the way, she was voted The World’s Best Female Chef in 2015 and became the inspiration for the character of Colette in the 2007 film Ratatouille. It’s been a fast-paced career, but the chef is still a long way from slowing down. For her latest move, next week she relaunches her flagship restaurant in a fresh incarnation.

“Around five years ago, I started to think that it was time to put myself in question again and to think about how I could tell my story in a different form,” she says as she takes a break from menu-testing. “When I opened Restaurant Hélène Darroze nearly 20 years ago, I wanted to prove something, to go a bit crazy and to show who I was. Now, perhaps because of maturity, I want to come back to my origin and what is my essence.”

The restaurant will reopen as Marsan, an homage to the area where the chef grew up in southwest France, and will open to the public on Monday, 27th May, marking a new phase in Darroze’s already glittering career that sees her going back to her youth. “From my childhood, I have had these values of authenticity, respect, humility and also sharing and generosity. It was all about giving everything we had and sharing it with the guests, and that's really what I want to do here,” she says. 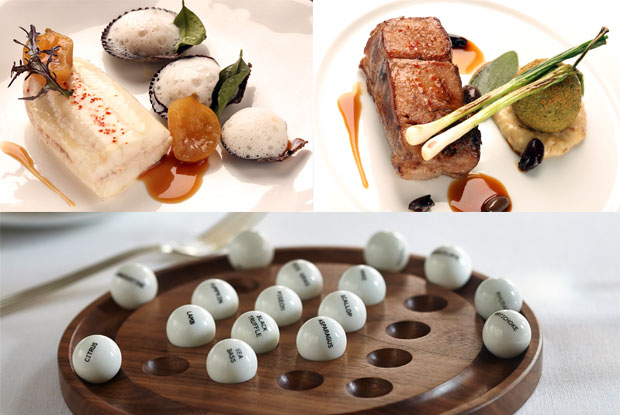 A selection of Darroze's dishes from her Paris and London restaurants

The idea of reopening Restaurant Hélène Darroze in a new form came from an unlikely place. “Being voted The World’s Best Female Chef in 2015 pushed me a lot. The award gave me a new motivation, because it made me realise many things and especially the fact that I had to put myself in question again,” admits Darroze.

“At that time, I met all these cooks who had a strong sense of authenticity, people who were doing something so personal with their country’s heritage and produce. To meet chefs like Enrique Olvera, Mauro Colagreco or Massimo Bottura, and see the way they appropriated their cultures and what their countries gave them, to me it was a shock. I realised I had to come back to that,” she says.

After closing Restaurant Hélène Darroze, the chef focused on how she could make the experience better for the diner, and Marsan now features a new 22-seat table in a newly created Development Space and a six-cover Chef’s Table at the heart of the kitchen. As well as the space, Darroze has reinvented the menu with a host of new dishes celebrating her childhood and heritage.

“I have so many good memories of my time in Marsan and I realised that I spent my childhood around the values that are so important to me now,” she says. “When I was a child, I spent a lot of time in my grandfather’s kitchen. Every day I saw the fishermen and the producers, every day I went to the farm where he had the poultry and grew vegetables, and in the winter, on Sunday evening, the hunters would come with the game.

“I remember seeing the venison hanging in the cold room of the restaurant. For a child, it was difficult to see, but that was my life, I was confronted with it very early, so I started to develop a respect for the ingredients and a lot of humility to cook with these products.” 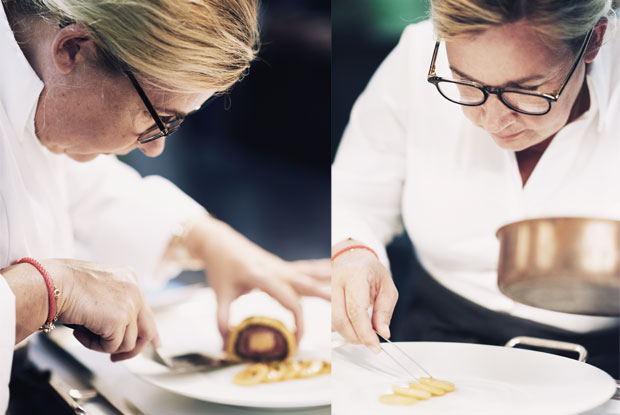 Darroze at work in the kitchen

When conceiving the menu for Marsan, Darroze wanted to showcase the produce of her home region of Les Landes in southwest France, at the border with the Spanish Basque Country. “In this area they have these special peas called teardrop peas. They are so sweet, you put them in the mouth and the taste just explodes on the palate. I created a dish with this ‘green caviar’ and I’m going to serve it with black caviar,” she explains. “It’s at the same time really vegetal and a bit salty from the sea. It’s a mix of authenticity and creativity.”

Another dish that she highlights is the chef’s interpretation of the traditional Basque preparation called koskera. “It’s a dish of white asparagus, peas, clams and eggs,” says Darroze. “This time of the year is the best season for the hake that is line caught in the Basque Country, and the egg yolks are really yellow. The dish is about respecting the season, so I tried to make my own version of it with hake, although it’s very new, very different from how you would have it in the Basque Country.”

Despite the excitement around the new opening, the chef remarks that the process of reinvention wasn’t always easy. “When I started to show the new restaurant to my friends, the menu but also the details in the dining room, they said to me: ‘It’s incredible, you put so much of you in this’. It was what I wanted to do, but it’s also a lot of pressure because emotionally, it’s really difficult. It’s revealing a part of myself, a part of me and a part of my family.

“But it’s what I’ve been dreaming to do for 25 years, and now I’m doing my best to make that dream come true.”

Header images: Hélène Darroze and a first look inside Marsan