The hotel bar revolution: 10 years of the Connaught Bar with Agostino Perrone

The creative mind behind the Connaught Bar in London, Agostino Perrone is a bit of a legend in the drinks industry. This year, the bar is celebrating its 10th anniversary, as well as picking up the Heering Legend of the List Award at The World’s 50 Best Bars 2018, crowning its influential first decade. We speak to Perrone to find out how the Connaught Bar changed the rules of the industry.

The first time that a young Agostino Perrone set foot into the Connaught Bar just over 10 years ago – following a £70 million restoration of the eponymous hotel in London’s Mayfair – he walked into an empty room. “There was scaffolding everywhere, the bar with the work stations wasn’t in place, and the only people in the bar were the artists,” says the current Director of Mixology at the award-winning bar.

But the artists had something special to show him: the unique textured walls in platinum silver leaf, one of the few original features left in the hotel from its 1816 opening. Despite the works, it was the bar’s elegant architecture, beautiful silver finishing and impressive front door that captivated the Italian bartender. These are also the features that inspired its 10th anniversary menu, unveiled earlier in 2018, closing the circle of a decade of success that made the Connaught Bar an iconic reference in the world of hotel bars.

Before the 2008 renovation, the space housed a classic American bar in a luxurious hotel, one of many similar lounges in the British capital. The management was eager to re-invent and carve the refurbished Connaught Bar a place in the increasingly popular London mixology scene, and Perrone was the person chosen for the job. 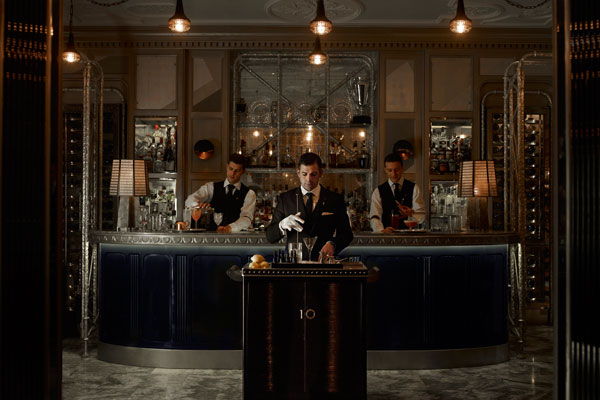 Perrone at work at the Connaught Bar

Originally from Lake Como, Perrone spent five years working in London bars such as Dusk and Montgomery Place (both now closed). When he received the call from The Connaught hotel in 2008, he was ready to take on a new challenge. He did it with the clear intention of creating something different from the existing hotel bars. “Ten years ago, there were no cocktail bars in hotels,” he says. “There were beautiful bars with impeccable service, attention to taste and luxury, but no one focused on innovation in cocktails.”

At a time when hotel bars only served classic cocktails – ‘spirit and mixer or champagne and spirit’, as Perrone puts it – he sought to bring a bit of the spirit of the city’s most forward-thinking bars to The Connaught. Today, much of the bar industry has followed in Perrone’s footsteps, but the Italian bartender was the first to come up with more than one idea popularised over the last decade.

“We had the freedom and the support from the hotel to put the creativity into a classic environment. What we wanted to do was to translate the fine dining experience into liquid form,” he says. “We created a way of work that inspired new generations. After the Connaught Bar opened, so many other hotel bars wanted to have this concept of creative approach in cocktail. We made the hotel bar accessible again for the consumer, and also for people who want to work in this industry.”

The then-Head Mixologist and his team devised a new kind of hotel bar that revolved around the idea of experimenting with new flavours and of re-focusing the whole experience on the guests’ feelings. “After they leave, the guests in your bar perhaps won't remember your name, your face or exactly the cocktail they had – but for sure they will remember how they felt,” he says.

For this reason, Perrone and his team decided that the experience would start with a welcome cocktail, which ‘allows you to cleanse your palate and feel engaged with the atmosphere around you’, he says. The welcome drink helps guests settle at their table or get comfortable in their armchairs without the need to rush to the bar to order a drink, and it has been adopted by many a bar since – but Perrone claims that the Connaught Bar was the first to use it. 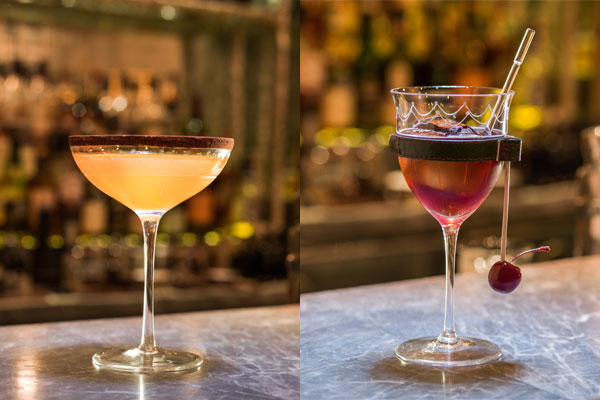 Changing the rules of hotel bars also meant that the team had to go out of their way to educate the customers. “In 2008, there were few bars in London that were doing freshly squeezed juices on a daily basis. We had to go to every single table to explain that the drinks were taking perhaps a little bit longer than normal because everything was freshly pressed,” he says.

Every morning, the Connaught Bar team also undertook an eight-hour-long prep session (now 10 hours), during which syrups were freshly made in-house and the finest ingredients cherry-picked from selected suppliers across the UK. “It was the same thing that a Michelin-starred chef or a fine dining restaurant would do. That was our approach,” says Perrone.

As for the cocktail offer, the bar’s first menu was inspired by the theme of ‘forgotten classics’. Researching and rediscovering cocktails that had gone out of fashion or whose recipes were gathering dust in old books, the cocktail menu incorporated unusual flavours and ingredients. “We play with aromas, sprays, essences and cocktail presentation, which is a key element,” says Perrone. “A drink needs to look intriguing, to taste delicious and to have an amazing balance in the mouth that makes you want to go back to discover more flavours.”

For the first time, the bar experience wasn’t over with the cocktail. Instead, guests received a souvenir before leaving: an elegant card with the recipe for the concoction they most enjoyed during their visit. “The cocktail card is something very romantic. It reminds me of the hand-written letters that regulars like Ernest Hemingway would carry around while travelling, written from one head bartender to the other to explain his usual drinks and habits,” he says.

The idea behind the cocktail card – another one of Perrone’s firsts – is that you take away with you a little piece of the Connaught Bar. It was for this reason that the bar also became the first to have a shop, with the menu listing not only cocktails and spirits, but also the signature hand-decorated glasses, available for everyone to purchase. “It's a piece of the Connaught Bar in your living room,” says Perrone. “When you see it, you remember the experience you had with us, the staff smiling at you and creating this experience for you.” 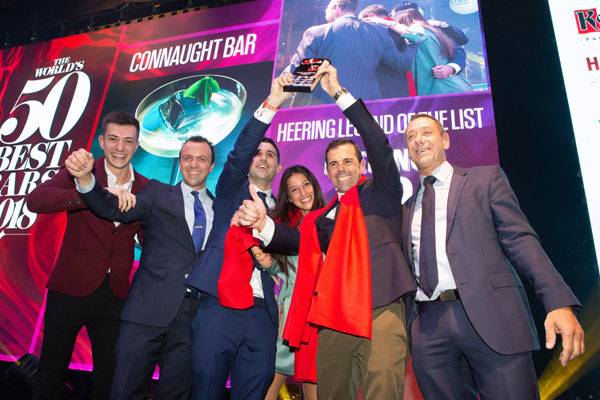 From the welcome cocktail to the recipe card, over the last 10 years Perrone has worked out the recipe to create a hotel bar that keeps on innovating, staying true to its essence but at the same time retaining its relevance with new menus, service tweaks and other innovations. So it was a significant moment when, at The World’s 50 Best Bars awards ceremony in October, the presenter called out the Connaught Bar as the winner of the Heering Legend of the List, an award that recognises the bar that has performed most consistently over its history.

Making its first appearance in The World’s 50 Best Bars list in 2010 at No.11, the Connaught Bar has been voted into every edition of the ranking since, rising to No.2 in 2011. It has also been a firm favourite in recent times, appearing in the list’s top five for the last three years and bagging the fifth place in the most recent edition.

Perrone takes the award as a sign that the bar is on the right path, but he’s not ready to stop fine-tuning his creation. “We never stop creating, never stop experimenting. Every time we do something, the process starts with 'how do we do it'. One of my mottos is that it doesn't matter what you do, but how you do it,” he says.

“Winning this award is a recognition of the hard work I put in since the beginning, but it's a team effort. It's a family award to recognise all the passion that we put in in the last 10 years, for whoever is part of the team now, but also who was in the past.

“The biggest achievement of the Connaught Bar is not changing. We go back to the beginning, always focused on our guests and on the style we wanted to have since the beginning, with no arrogance, a humble approach and an open mind.”

Famous around the world for its Martini trolley – from which you can order James Bond’s favourite cocktail perfectly customised to your own taste and prepared in front of you – the Connaught Bar celebrated its first 10 years with a menu that looks back at a decade that has left a mark on the bar industry forever. 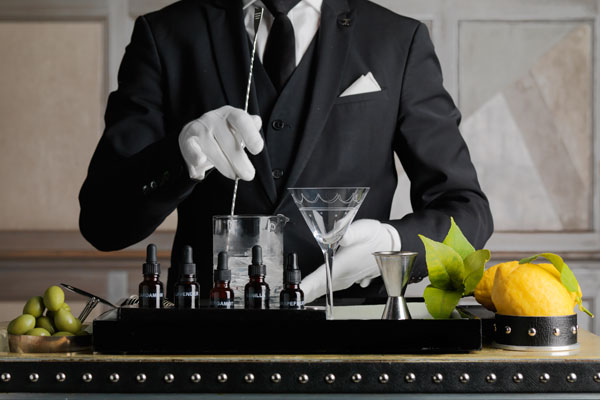 “Ten years ago, the challenge was to inject creativity into the Connaught Bar. After 10 years, the challenge was to inject simplicity into its creative world,” says Perrone. Instead of looking for external inspiration – as was the case with the forgotten classics and subsequent menus – the Connaught Bar’s creative team went in the opposite direction.

“We wanted to be inspired by ourselves and what has happened over the last 10 years, so this menu feels very personal. We wanted to highlight the tales of the architecture of the bar, the materials and its people, ourselves and our guests,” says Perrone. Called The Essence, the menu features drinks inspired by everything from the bar’s marble to the lobby’s grandfather clock and chef Hélène Darroze, who has a restaurant at The Connaught hotel and who was named The World’s Best Female Chef in 2015.

As part of the 10th anniversary celebrations, the Connaught Bar will also launch its own gin in a 1,000-bottle special limited edition. Distilled inside The Connaught hotel, the gin features three unique botanicals that reflect different aspects of the bar. The first is mace, a spice derived from nutmeg that Perrone himself picked up in Sri Lanka. The second is lemon peel from the Amalfi coast – ‘the first thing that comes to our clients’ minds when talking about Italy’, he says. Finally, the third is a distillate from one of the hotel’s famous Bordeaux wines.

“We want to give a piece of our story to the guests, in a glass, as liquid storytelling,” says Perrone. “[The gin] is a combination of a juniper-driven gin with a sparkling, citrusy note. The mace is there, wrapping all the other spices together, and the wine gives it the long taste, the mouth feel, the creaminess and the long minerality on the palate. The bottle looks like a 1920s cocktail shaker. It's absolutely fantastic.” The gin will start being served in the bar and sold to the public in December.

Celebrating the bar’s 10th anniversary means looking back on its history and successes, but also looking to the future and what the next 10 years will have in store. Perrone, however, takes it day by day, and his approach is simple. “As much as possible, we want to keep the creative style of the bar. The style won't change – it will improve, but it won't change,” he says.

“The objective is the journey. It's not winning an award or making the best cocktail in the world, the objective is to keep on going, keep improving, learn from your mistakes, learn from other people and learn from the guest. We want to make sure that whatever we do has a meaning, just as we did 10 years ago when we opened the Connaught Bar.”

Watch Perrone prepare his signature Martini in the second instalment of our Cocktail Stories series:

Now read the interview with Dandelyan's Ryan Chetiyawardana and watch the video to discover how to make the bar's longest-standing drink, the Koji Hardshake:

Header images: Perrone mixing a Martini and the interior of the Connaught Bar