Ryan Chetiyawardana on Dandelyan’s legacy, the final menu and disrupting the drinks industry

Only two days before the unveiling of The World’s 50 Best Bars 2018, which saw London bar Dandelyan topping the list and earning the title of The World’s Best Bar, sponsored by Perrier, Ryan Chetiyawardana announced that the London landmark would be closing in 2019 to be transformed into a new concept.

Today, Chetiyawardana announces Dandelyan’s final menu. We catch up with him to discover the new offer, discuss the bar’s history and find out how to create drinks that make people come back.

October 2018 was a month that sent shockwaves through the drinks and cocktail world. It started with an announcement on October 1st: Ryan Chetiyawardana – the biologist-cum-entrepreneur behind the Mr Lyan hospitality brand in London – revealed that his flagship bar, Dandelyan, would be closing. The news was followed two days later by the revelation that Dandelyan had topped the world, earning the title of The World’s Best Bar 2018, sponsored by Perrier.

The two announcements focused the world’s attention on Dandelyan, its unique cocktail experience and how much the bar would be missed, and also fomented speculation about what it will become. But before the bar undergoes a ‘full transformation’, as Chetiyawardana puts it, to re-open as a completely different concept in 2019, the bartender has revealed today one last cocktail menu, the bar’s swansong before it disappears from the London cocktail scene.

“We’re so excited for the launch of our next instalment of The Modern Life of Plants — the third chapter in what we termed our second book, and fittingly, the final ever Dandelyan menu,” says Chetiyawardana. The Modern Life of Plants is the overall concept under which the Dandelyan team has been creating its menus in 2018, focusing on an exploration of modern and sustainable agriculture and how unusual ingredients can be used to create world-class cocktails.

“It’s in many ways the culmination of everything we’ve done under the Dandelyan guise and also in terms of the momentum of the Mr Lyan family, and we’re really excited to showcase a lot of hard work. As usual the whole team – 33 in all – have inputted to the menu and really pushed themselves, and it’s the perfect way to usher in the end of Dandelyan,” says the bartender.

The menu draws inspiration from three mass-produced products: mint, hops and grapes. With drinks such as the Stranger Things Old Fashioned – inspired by new methods of growing plants that aim to remove toxins – and the Re-Supply Sour, which includes nutrient-enriched cardboard in its ingredients, the final chapter of the Dandelyan book is as full as surprises as ever, featured alongside the bar’s long-standing classics such as the Koji Hardshake, on the menu since 2014. 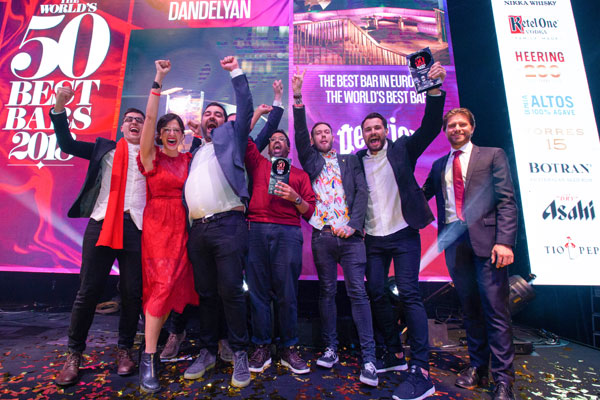 Chetiyawardana is a big deal in the drinks industry. He is the man behind the Mr Lyan hospitality empire in London, which encompasses not only Dandelyan but also Super Lyan (the new incarnation of revolutionary bar White Lyan) and restaurant Cub. He is also one of the industry’s most recognisable faces, who has risen to fame over the past decade thanks to a rebellious spirit, bubbling personality and tireless work ethic.

Dandelyan’s impending closure may have made Chetiyawardana nostalgic, but it has also brought out a renewed sense of accomplishment and pride in its leader. “We were so honoured to take home the top spot at 50 Best this year,” he says. ”I feel extra proud of all the hard work and passion that has gone into this menu. We’ll be taking it on the road and celebrating it over the last few months. We’re really excited to share it with people as a fitting end to all things Dandelyan.”

For Chetiyawardana, opening Dandelyan just over four years ago was about a lot more than adding a new address to London’s growing list of excellent bars. Instead, he and business partner Iain Griffiths set out to create something that would disrupt the drinks industry as they knew it.

“Within the industry, people were seeing that there was a limited set of things that formed the backbone of classic cocktails. That seemed crazy to us, because nature has so much diversity, there is so much that we’re able to draw on,” he says.

Seeking to move away from branded spirits and elegant hotel bars, Chetiyawardana started toying with ideas for two bars, one that would disrupt the industry’s growing problem with waste and another that would explore modern developments in botany and biology as the basis for an innovative cocktail menu. The first became White Lyan – the world’s first bar to function with no perishables, no ice and no branded spirits, opened in 2013 – and the second became Dandelyan, which opened one year later inside the Mondrian London hotel.

While looking for the right spot to locate Dandelyan, Chetiyawardana was presented with an empty room overlooking the Thames on London’s South Bank. Part of Mondrian London at the Sea Containers building, the room was soon transformed into the iconic green and gold cocktail temple that is Dandelyan today, which Chetiyawardana envisioned under the tagline of a ‘neighbourhood bar in a five-star setting’. 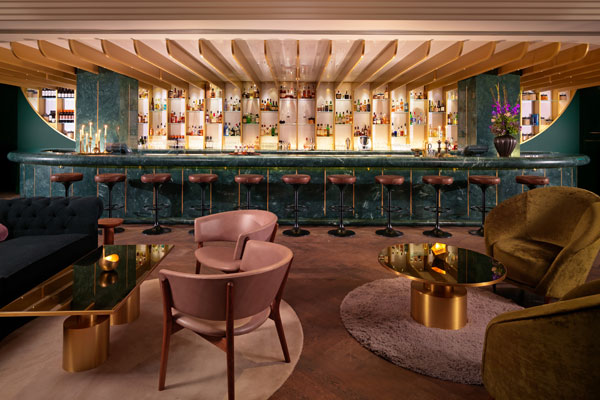 “I’m obviously quite biased on this, but I think this is the most beautiful bar in the world,” says Chetiyawardana, sitting on a stylish stool with the backdrop of St Paul’s Cathedral behind him. “We had this room that felt very luxurious, very opulent, but we broke it down and made it feel welcoming, comfortable and easy for people, so they didn't feel they were put off by that classic model of a hotel bar, which felt quite scary to some.”

The green hues of the bar fittingly evoke the idea of modern botany that has been the driving force behind Dandelyan since it opened. A disruptor by nature, in 2018 Chetiyawardana decided to focus the bar’s entire cocktail output away from the direction that the hospitality world was moving towards. With the trend pushing towards seasonality and small-scale production, the Birmingham-born bartender chose to focus on mass-produced ingredients.

“The ideas of locality, seasonality, foraging and whole foods are of course interesting, but within the idea of what the future of our food will be, we were trying to show that there is another side to the coin,” says Chetiyawardana.

The necessity to move towards a more sustainable production system for the bar and restaurant industry came from a realisation that Chetiyawardana had while working with a new product at the bar, which can produce more than 1,000 cocktails in one night. “For our second menu, we worked with a small vermouth producer. We talked through how much we might need and they were totally fine with it, but we had bought all their product within a couple of months,” says the bartender.

Since this episode, Chetiyawardana and his team have been working extra hard to use ingredients that not only can be grown sustainably, but are staples that are cheap and easy to source, such as cereal or hops. Among many other outstanding producers, Dandelyan has been working with Kent apple producer Brogdale Farm, which also houses a unique collection of apple varieties, with 2,200 fruits of different flavours.

“It's a reality of the world that people aren't going to stop eating apples,” says Chetiyawardana. “The question is how can we produce them in a manner that is in touch with the land and still ticks the boxes of changing the attitude around it. [Brogdale Farm] are producing crops that are delicious, in touch with the landscape they're in and that can allow us to have wonderfully tasting apples.”

In four years, Dandelyan has moved through many different versions of its menu, changing and innovating its offer, but there is one cocktail that has stayed constant within its whole history – the Koji Hardshake, which is also included in the bar’s last menu. Featuring blended scotch, homemade koji syrup, lemon juice, double cream, liquorice bitters and egg whites, the Koji Hardshake is a lesson in how to create a cocktail that brings people back to the bar over and over. 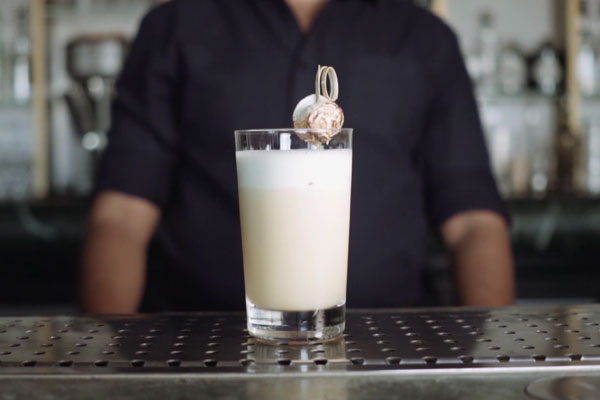 Chetiyawardana defines it as the bar’s own version of a whisky sour, but the inspiration behind it came from grains. “With the Koji Hardshake, we were really trying to analyse something about cereal,” he says. “People usually think of bread or breakfast cereal, something nutty and dark and rich. That parallel still exists with whisky, people think it's going to taste smoky or spicy or woodsy, and we wanted to show that you can have tropical fruit notes in whisky and you can have cereal that tastes like flowers, depending on how you process and manipulate it.”

The koji is a natural mould used in Asian cultures to ferment soybeans in the production of soy sauce and miso. Chetiyawardana started experimenting with the fungus prior to opening Dandelyan, and the bar has been making its own koji syrup since 2014. “With koji, [the grains] develop this incredible florality that works really well to complement the fruity notes in a blended whisky,” he says.

“We just capped it off with a toasted marshmallow. It's a little bit of theatre, something that draws people in, a really nostalgic aroma that wafts across the room. It's a truffle marshmallow, which we coat in a little bit of truffle until it gives that nice earthy, funky lead into the characteristics of the cocktail. The Koji Hardshake is a drink that people send people to the bar for, and they would be upset if we took it off the menu.”

Perhaps the time is right for Dandelyan to close because it has come full-circle – the bar industry has become increasingly more diverse over the past few years, with bars such as Himkok in Norway fully embracing the sustainable ethos, and many others making changes towards a bar industry that favours ethical products and sustainable practices. But for Chetiyawardana, this is only another evolution – a chance to take another look at the reality of the industry and to re-think what to challenge next.

“We’re always excited by doing new things,” he says. “We don’t want to sit still, we want to continue to innovate. We have this amazing team and this amazing space, so we want to continue to challenge ourselves and find new ways of making something exciting for the guests of London and for the industry in a global sense as well. I’m really proud of what Dandelyan has been and of what it can become.”


Discover the history of the Koji Hardshake in the first instalment of our Cocktail Stories series: