Take back ownership of flavour: how Dan Barber wants to revolutionise agriculture

At #50BestTalks: Beyond Frontiers, the latest edition of 50 Best’s thought-leadership forum held on Monday 16th September in Paris and presented by Miele, chef Dan Barber called for greater diversity in modern agriculture, rejecting uniformity in favour of flavour

“Jane Jacobs had a problem,” said Dan Barber, chef of US restaurant institution Blue Hill at Stone Barns, as he took to the #50BestTalks stage at the Musée du Quai Branly – Jacques Chirac in Paris, France. The American activist’s problem, said Barber, was the expressway that urban planners were proposing to build through the Greenwich Village neighbourhood of New York.

Jacobs, an outspoken campaigner and preservationist, fought strongly against the construction of the expressway, which would have signified the loss of several historic buildings to the rapid urban development that was sweeping many Manhattan neighbourhoods in the 1950s and 1960s. Where planners saw chaos and the need to modernise, Jacobs saw value, beauty and order in the diversity of her neighbourhood.

Jacobs came to Barber’s mind as he visited Salinas Valley in California, one of the most productive agricultural regions in the US. “Nine of every 10 bowls of salad in the US come from this place,” said the chef. “But the tens of thousands of plants around me had this mystifying, almost military, uniformity. You get the sense that these lettuces are not a product of soil and water – they looked engineered, pre-programmed.”

And in a way, the chef reflected, they are. “Nearly all the produce we eat now is engineered to fit in a box,” said Barber. Industrialised agriculture, which prioritises vegetables that are uniform and easy to transport, has become the norm for many US producers. The seeds from which these plants are sown every year are in the hands of only four companies worldwide, which own patents for 75% of the planet’s seeds, explained the chef.

“A seed corporation can’t own onions or carrots, but they can own genes for bitterness in tomato or sweetness in carrots [through patents],” said Barber. “There is even a gene ownership on what is called a ‘pleasant tasting’ melon. So these corporations don’t only own taste, but they define it too.”

By selecting seeds based on yield, shelf life and uniformity, many other characteristics of the plant – such as nutritional value and flavour – have slowly disappeared from industrially-grown vegetables such as those grown in Salinas Valley. The most common varieties of lettuce – iceberg and romaine, which according to Barber are the most eaten vegetables in the US – contain virtually no vitamins or micronutrients. 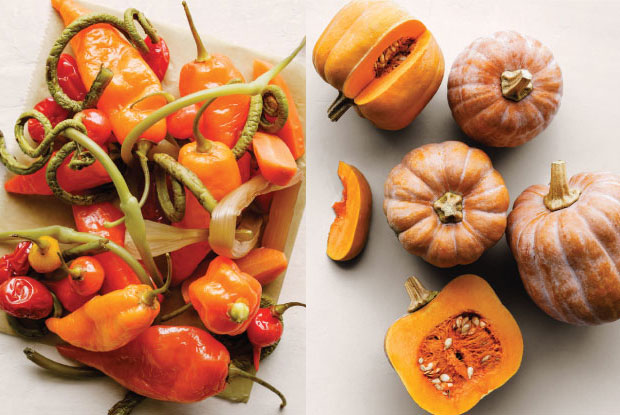 In response, many of the leading chefs in the world have gone back to heirloom seeds, which produce vegetables with much better flavour. While Barber understands and shares the modern fascination with heirloom varieties, he believes these cannot be the future. “We advance flavours by manipulating old ones with new recipes. Now we have to do the same with seeds,” he said.

Barber first stumbled upon the issue when he asked farmer Michael Mazourek to breed a better-tasting butternut squash for Blue Hill at Stone Barns and was told that it was the first time anyone had ever asked Mazourek to breed specifically for flavour. Soon after, Barber and Mazourek joined forces with seedsman Matthew Goldfarb to found Row 7 Seed, a company that engineers and sells seeds selected for higher nutrition and better flavour.

“We need to reject the idea that seed companies can dictate from on high. Over the past year, I have been introduced to more varieties of lettuce, tomatoes and potatoes than I can name, coming from farmers all over the world. Seed companies don’t want them. But we do,” said Barber.

Concluding his presentation at #50BestTalks: Beyond Frontiers, the chef said: “I took a look at the gathering of chefs in this room, I thought about the organising principle of 50 Best and all that it provides, and I thought: who better to lead this movement than chefs?

“Chefs to champion diversity. To illuminate and mobilise our communities. To take control of our neighbourhoods. To reject the idea that seed companies have the right to dictate from up high, to build these ridiculous monoculture highways through our rich ecologies. To refuse their claim that they own taste. To reject the notion that seed is software fit for a box. To protest and protect the seed for what it is: dynamic, living, delicious.”

Watch Barber’s full speech at #50BestTalks in Paris in the video: