Hive mind – how Manu Buffara changed the food culture of her hometown, starting with bees

Manoella ‘Manu’ Buffara cited the projects surrounding her Brazilian restaurant Manu at #50BestTalks: Beyond Frontiers, presented by Miele, to show how helping a community to engage with food can improve quality of life at every strata of society


Poetry has always been used as a medium to convey emotion. At #50BestTalks, which took place at the Musée du Quai Branly – Jacques Chirac in Paris, Manu Buffara decided penning her own verse would be the most effective way to underpin her poignant presentation, Changing Cities Through Food. It illustrated her message perfectly, leaving the audience with a mix of admiration and wonderment.

This stylised video of a friend reading her poem brought the curtain down on the talk that found its roots in Curitiba, Buffara’s hometown in Brazil’s southern state of Paraná. She used her city as a prime example to demonstrate how it is possible to get a community to engage with its edible ecosystem by allowing them to touch, feel, taste and interact with the food that they eat during its production. “When I said to the mayor that I was putting beehives around the city, he thought I was mad,” she said. “I explained that people need to feel connected to food and the bee project was a great place to start.”

The message ran deeper than just providing her city with excellent honey. When the people of Curitiba saw the physical hives all over town, they began to ask questions. Without being conscious of it, they were enacting Buffara’s plans to connect the population with food.

As well as helping to pollinate the city’s plants, improve insect life and produce honey, the chef and restaurateur was also helping reintegrate a species that was all but extinct. “When the Portuguese came to Brazil, we forgot about our stingless bees, the beautiful native bee. The Portuguese brought their own bees which produce more wax that was used in the Catholic Church. Our bees might be really small, but their honey is amazing.” 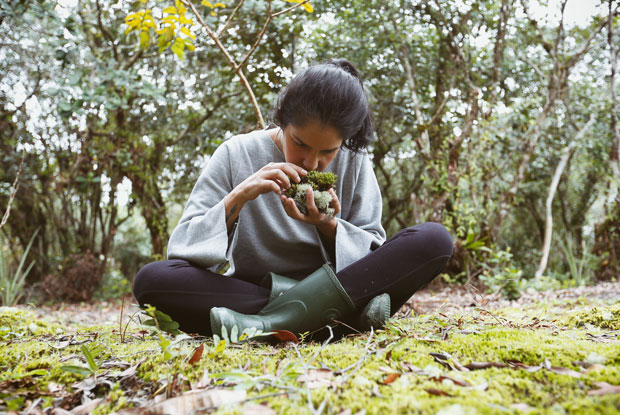 From this project, the city’s people inadvertently learnt about a native species, asked questions about where their food came from and took pride in the end-product they delivered. Many of the two million population of Curitiba were re-engaging with food and this proved the potential of such schemes to the mayor.

The hives were just the beginning. In 2013 Buffara created an initiative involving farmers and producers in and around the city to start working directly with her and her restaurant, Manu. This project has allowed the restaurant to operate almost entirely self-sustainably. “We began with just two gardeners; today we have 89 across the city who produce food for our restaurants. Most recently, we connected them to organic seeds. We don’t just want them to grow things like carrots, broccoli and lettuce – we want rare vegetables and herbs. The new seeds will provide new flavours and inspire the next generation.”

The city’s children were also early adopters who helped spread the message. “We had 120 school kids that come for an hour a week to the garden,” said Buffara. “They grab some food, we talk to them about the produce we have and they reconnect with the land. They become inspired by food.”

The products, she says, have the answer. “My relationship with the vegetables is so deep. They are my inspiration and I believe that we can change the diet of a nation by taking small actions which begins in our own houses. I fight for the quality of food, for the diversity and for the work of our local farms. My food is a way of telling this story.

Watch Buffara’s talk in full, followed by her emblematic poem, in this video of her talk at #50BestTalks: Beyond Frontiers in Paris.

Tomorrow, keep an eye out for the highlights from what American chef Dan Barber of Blue Hill at Stone Barns had to say at #50BestTalks and check back next week for Mauro Colagreco from The World's Best Restaurant Mirazur’s speech highlights.

50-50 is the new 5050BestTalks Beyond Frontiers50BestTalksBrazil