Peru’s very own Gastón Acurio is the winner of the 2018 Diners Club Lifetime Achievement Award.

Following in the footsteps of a line of legendary chefs that includes Heston Blumenthal (2017), Joël Robuchon (2009), Alice Waters (2007) and Paul Bocuse (2005), Peruvian chef Gastón Acurio is this year's winner of what is perhaps the biggest accolade in the world of gastronomy: the Diners Club Lifetime Achievement Award.

After winning the same accolade as part of Latin America’s 50 Best Restaurants in 2013, Acurio now does the double, receiving the Lifetime Achievement Award from the voters of The World’s 50 Best Restaurants. This could be seen as a triumph for Acurio's unofficial role as Peru's gastronomic ambassador, having successfully brought the nation's cuisine to the global stage.

Now aged 50 and with a slew of establishments in his motherland and across Latin America, the most widely respected chef in Peru shares some pearls of wisdom for young cooks embarking on a career behind the burners.

Find out if you were born to cook

“If you’re thinking about becoming a cook, I’d suggest that you try to get to know the life they lead in depth. That despite the lifestyle we cooks live – which goes against the tide of others as we work very late, day and night, at weekends and on bank holidays, living and breathing the kitchen – if none of that bothers you, then you were born to be a cook.

“But, if you feel that this life might take certain emotions away and you want to enjoy friends, family and travel; that the long hours and having to work when others are having fun might affect you, then maybe you should think twice about it. With so many TV shows and so much information online, becoming a cook is very popular these days so it’s possible that a youngster, seduced by cooking, might make the wrong decision. You can be crazy about it or it could end up troubling you. In my case, it relaxes me.”

“Once you’ve decided to be a cook, a new problem emerges: impatience. Excess information generates frustration and anxiety in youngsters and they don’t have the opportunity to learn on a slow and steady apprenticeship like those of us who are little older have learnt. Take a year or two learning in depth at the same restaurant, and give a bit of your heart to the person who taught you.

“Today, because of what we see on the internet, it seems that everyone achieves everything fast but it really isn’t like that. Embrace patience as a virtue; it’s important not to succumb to the temptation of giving something up when the process hasn’t yet reached its conclusion.”


Learn how to deal with criticism

“The first time a diner sent a dish back at my first restaurant, I was depressed for two days and thought it was the end: that I’d never be able to make that situation any better, that they would say my restaurant was horrible and tell their friends not to come. But life teaches you that it doesn’t actually matter and that it is in fact an opportunity to assess what happened and pick yourself up the next day. You need to enjoy every day as it comes.” 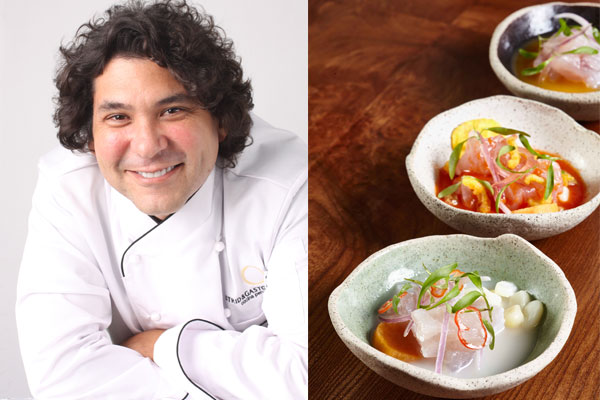 Gastón Acurio and a trio of ceviches

Be happy and you’ll make others happy

“If you enjoy being in the heat of the kitchen and that makes you happy, then you’re in one of the most wonderful professions in the world and that means you’ll make people happy every day of your life. When you like that lifestyle, that’s a great way to live.”

“When you’re a professional with your own little restaurant, be thankful – to the people who have helped you and accompanied you and to those who taught you or opened a door for you. You should also pay it back. Once you’re on the right track, do what you can to make sure others can take a path like yours. That is the best way to thank the kitchen for letting you get to where you are.”

Watch chef Acurio reflect on his career as a chef and the Diners Club Lifetime Achievement Award: