As Mirazur in Menton, France, is announced as the No.1 in The World’s 50 Best Restaurants 2019, sponsored by S.Pellegrino and Acqua Panna, chef Mauro Colagreco reflects on the restaurant’s past, present and future.

Tuesday 25th June 2019 is a day that Mauro Colagreco and his team will remember forever. Singapore’s Marina Bay Sands marked the setting where Mirazur was announced as The World’s Best Restaurant 2019, sponsored by S.Pellegrino and Acqua Panna, arguably the most coveted accolade in the world of gastronomy. Colagreco received the roaring applause of his peers as he celebrated with his team, including his wife Julia Colagreco, who runs the restaurant's front of house.

Receiving the double honours for Mirazur as The World’s Best Restaurant and The Best Restaurant in Europe 2019, La Plata-born Colagreco brought with him on stage four flags, representing Argentina, France, Brazil and Italy. "Argentina is my roots, Brazil is the country that gave me the love of my life, France represents my culinary training, and more than half of my team comes from Italy," says Colagreco.

Spreading a message of acceptance across barriers, the chef says: "But the flags represent more than that. They symbolyse that cuisine doesn't have borders. Through cuisine, everyone can express themselves, wherever they are."

Mirazur’s essential quality is found at the crossroads of its several identities. The unique influences brought by the chef’s Argentinian background; his French training; and the restaurant’s location metres from the border between Italy and France, are all at the very core of what Mirazur stands for. “This border is a passage where everything flows, where creativity comes from the conflicts between the sea, the mountains, France, Italy and the Mediterranean,” says the cook. 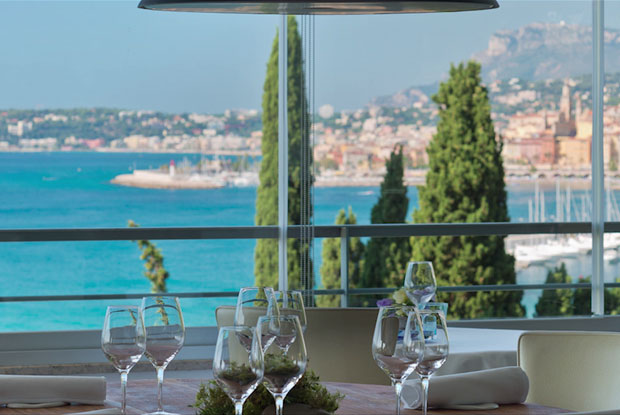 The view from Mirazur

One of the elements that makes Mirazur one of the most unique restaurants in the world is its three-tiered gardens which Colagreco has been progressively expanding and developing since he opened the restaurant in 2006. Facing in the same direction as the restaurant, perched over the rocky coast and overlooking the Menton marina with stunning views, the gardens look south out towards Corsica.

“The gardens are so important to me because they are the place where I feel totally free,” he says. “In the morning, we pick the vegetables. At noon, we go to the greenhouse and pick the other products. We never use any chemicals. Peas, beans, artichokes… everything starts in the gardens.”

The zero-kilometre philosophy influences everything that takes place at the restaurant. Mirazur, for instance, doesn’t have a menu – Colagreco prefers to simply take the day’s fresh produce and transform it into a series of dishes that change day to day. Fish and meat are also sourced hyper-locally by the chef’s small network of producers.

“At Mirazur we don’t have four seasons, we have 365,” he says. “We give priority to product quality, not to a recipe. It's a cuisine that is very dynamic and immediate, based on the ultimate product, executed in a kitchen that seeks to make its ingredients powerful and respectable. And of course, it's a Mediterranean cuisine, fresh, made with a lot of passion and especially a lot of love.”

As with all great restaurants, this love is palpable – it shines through Colagreco’s dishes and the stories behind them. “Green”, for instance, is a simple dish of green peas and kiwi that perfectly exemplifies the chef’s ethos. “I created this dish while walking through the pea plants in the morning with my son, Valentin. He loves peas and always asks to go to the garden to pick them. I wanted to reproduce in this dish the explosion of flavour that you have when you eat the peas directly from the plant.”

Colagreco first travelled to Menton around 2005 and immediately fell in love with the abandoned building that was Mirazur at the time. “I lived in Paris and I was working at Plaza Athénée. When I first landed in Paris, I remember it was grey, rainy and cold. But when I landed in Nice, it was nearly 25 degrees and the sun was magnificent. I met the previous owner of the restaurant, I saw Mirazur and said: ‘I have to do something here,’” says the chef.

For a young chef who had immigrated from Argentina to France, it was a big step – but Mirazur’s then-owner saw potential in Colagreco’s unbridled passion and agreed to give him a chance. Soon, the cook started working on his vision of what Mirazur could be.

“When I arrived, I didn’t know anything about the area, everything was new to me. Every day was a discovery. I didn’t know the culture, the terroir, the products of the region, the seasons or the people. I built everything from scratch, like painting on a white canvas,” says Colagreco. 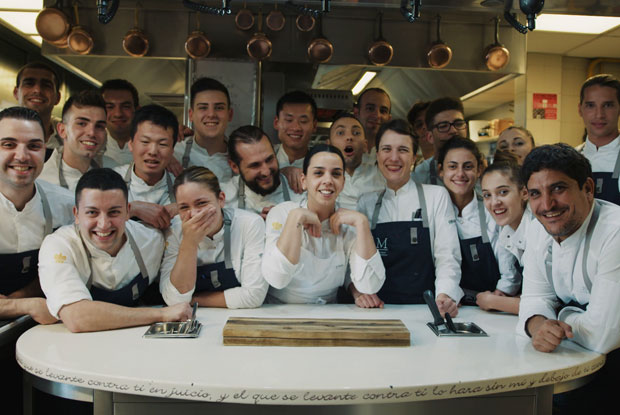 Colagreco and the Mirazur team

Mirazur opened with a team of five – three cooks and two front of house. Colagreco recalls that walking into the dining room to greet his guests meant that everything in the kitchen would lose control, for the lack of a cook manning the stove. The restaurant’s rise, however, was meteoric: it gained its first Michelin star less than a year after opening and earned its third in early 2019. Now, the Mirazur ‘family’ has grown to a team of 50 people, with Colagreco and Julia leading by example.

Although Mirazur has just undergone an extensive renovation that took in the gardens and dining room, the chef is still working towards his long-term vision of what the restaurant could be. Colagreco plans to extend the kitchen and transform it into an open space that will take up 50% of the whole restaurant. He also wants to expand the gardens to be able to grow even more produce. At the same time, the chef is also working on other projects, such as a new casual pizza restaurant in Menton as well as new openings in Miami and Bangkok.

“The future of the restaurant is to continue to evolve as we have done for almost 15 years,” he reflects. “That's the big challenge. The great feat of Mirazur is to continue to renew itself, to try and understand what cooking is. And to have the same passion for our job in 10 years that we have now.”

Now get a taste of Mirazur in the video: