As it enters its teenage years, Mauro Colagreco’s Mediterranean masterpiece has a new look and feel. Watch as 50 Best charts the changes at the Menton restaurant in 2019 – and plans for 2020 and beyond

Good restaurants are built on consistency; great restaurants are consistently evolving. Mirazur, the restaurant created and led by chef Mauro Colagreco, has taken a major step to cementing its place in the latter category with its recent makeover – the first and most significant part of an ambitious multi-phase restructuring programme.

In practical terms, the restyling includes a full refurbishment of the Mirazur dining room, fresh uniforms for staff and a reduction in the number of covers. On top of this, the menu and dining experience continue to grow in confidence and impact as the restaurant matures into its second decade. What hasn’t changed are the stunning vistas over the Mediterranean and Menton marina from the Art Deco building perched on a hillside next to the French-Italian border.

Go inside Mirazur in the video:

The Argentine-born Colagreco arrived in France’s Côte D’Azur back in 2006 with no knowledge of or connection to the region. He found the location for Mirazur and set about building the business from the ground up, starting with a kitchen brigade of just three, including himself. Only recently, with the restaurant climbing to the lofty No.3 position in The World’s 50 Best Restaurants 2018 list and the recent addition of three Michelin stars to its name, have Colagreco and his Brazilian wife Julia had the opportunity to upgrade the building and its interior.

The initial changes have created a sleeker, fresher first-floor main restaurant space, which seeks to enhance and reflect its Mediterranean location: all 12 tables (there were previously 15) now have full floor-to-ceiling views; new rounded interior doors and whitewashed walls and ceiling are designed to evoke a Greek island vibe, while details such as handbag stools aim to conjure images of driftwood floating on the sea. Petit-fours and coffee are now taken in the garden at the foot of the three-storey building – filled with fruit trees, edible flowers and herbs – as part of the newly choreographed Mirazur experience.

The service team is decked out in newly designed bespoke livery, with curved collars, necklines and draping that again seeks to replicate the movement of the sea. Yet the service from the youthful hospitality team, led by the experienced Laurent Bouveyron, remains relaxed and personable. 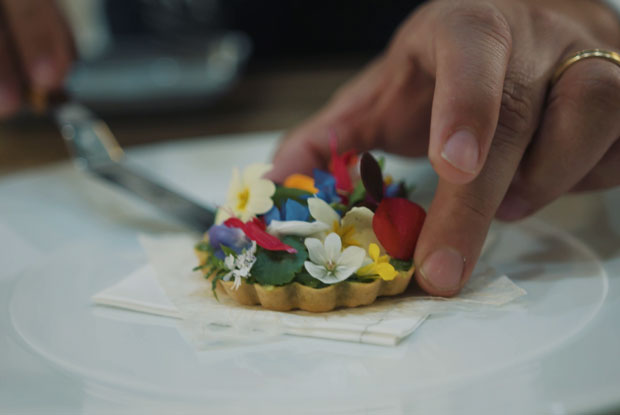 Despite the beautiful surrounds, it is Colagreco’s Mediterranean-focused menu that remains the star of the Mirazur show, drawing primarily on the produce from the chef’s vegetable garden, located 300m from the restaurant next to his own home. Tended by family members from Argentina and harvested each morning by the kitchen and service team in unison, the organic garden provides the kick-off point for the daily-changing menu of fresh-flavoured, hyper-seasonal and exquisitely executed dishes.

“At Mirazur we don’t have four seasons, we have 365,” explains Colagreco. “That’s why we don’t have a menu. We decided to remove menus to be able to change every day.” The vegetables, fruit, eggs, herbs and flowers are then complemented by fresh seafood landed daily at Menton’s Port Garavan, and wines cultivated in the hills of Provence, nearby Liguria in Italy and further afield.

Further phases of the building’s restructure will take place next year with the transformation of the ground floor – currently divided into distinct kitchen and bar-lounge spaces – into a large open kitchen featuring guest tables within it. The team also has plans to create an atelier and sommelier tasting area in the basement, which was previously used for administration and staff accommodation, ready for spring 2021. “The atelier will become a space for creativity, art and inspiration, where all the research and ideas take form,” adds Julia Colagreco. Mirazur’s quiet but determined evolution shows no sign of slowing up.