Sahar Parham Al Awadhi is setting the new standard for pastry in the UAE. With her unique focus on Emirati produce and cuisine, she has propelled herself onto the global stage. The inaugural winner of the Middle East & North Africa’s Best Pastry Chef Award, sponsored by Valrhona speaks to 50 Best about baking bread in the middle of the night, being the only female chef in a kitchen and how to create the perfect mouthful of chocolate mousse

“My desserts are never just a pastry on a plate,” begins Al Awadhi. “Whether they’re describing Emirati heritage, UAE culture or your own surroundings, there is always an element of experience – and a little bit of me in there,” she says.

The prominent pastry chef quickly became known for her whimsical and often nostalgic creations while leading the pastry kitchen in Dubai’s iconic Burj Al Arab hotel. As the first Emirati-born chef to work in the property, Al Awadhi was keen to represent her heritage.

“I like to include little things that I remember about food from my childhood. We grew up here surrounded by so many different traditions, so that became second nature to us,” she says.

One of those long-standing rites, which Al Awadhi remembers with bittersweet fondness, was attending weddings with her mother. “She used to drag me along and they would serve an Egyptian umm Ali, which I always thought was such a terrible dish,” recounts Al Awadhi. 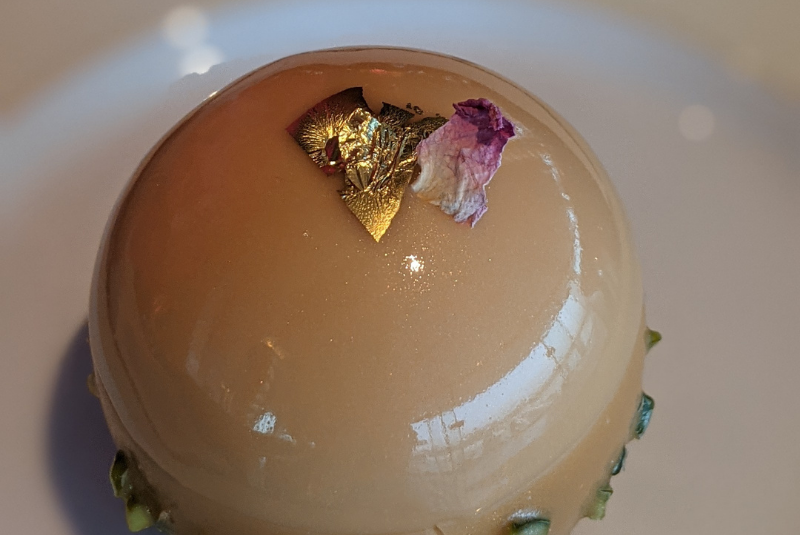 The 'Umm Ali 2.0', a modern take on the traditional Egyptian dish

Equipped with her own kitchen and knowledge of pastry, she decided to re-invent the umm Ali – a warm bread pudding made with milk, rose water, pistachio and raisins – by introducing her signature modern spin. Al Awadhi’s dessert is a delicate sphere of caramelised white chocolate that encases rose mousse, salted pistachio sponge and toffee to represent the raisins.

Buoyed by the success of her creation, Al Awadhi was keen to re-conceptualise other Emirati desserts. “I often start with a dish, deconstruct it by flavour or texture, and put it back together in my own way without comprising the essence of the dish itself,” Al Awadhi says.

Particular ingredients often star in Al Awadhi’s dishes, such as rosewater, vanilla or cardamon, not to mention her love of chocolate. “I really wanted to make the perfect chocolate mousse for everyone, even people that don’t like dessert and just want one bite of something,” she says.

This idea evolved into the irresistible ‘Late Night Spoon’, a mouthful of velvety Valrhona chocolate mousse, which made an appearance at the Middle East & North Africa’s 50 Best Restaurants 2022 Chefs’ Feast. “It was supposed to be one bite, but people kept coming back for more,” she laughs. 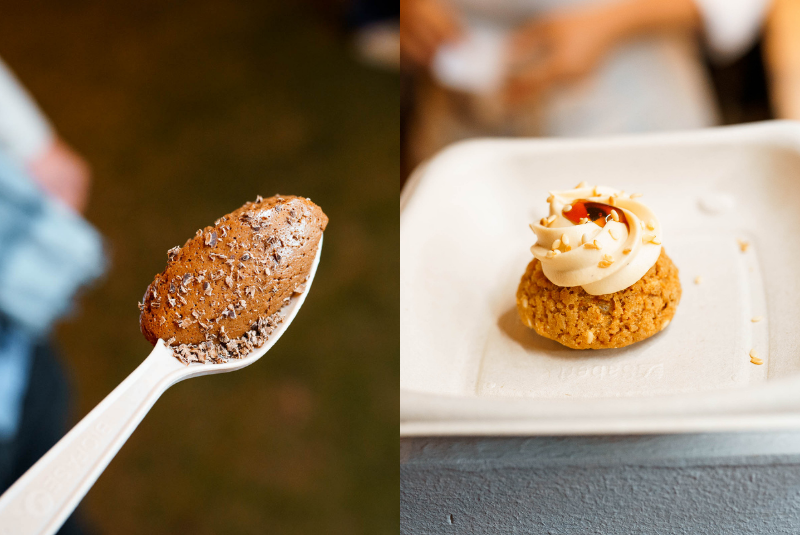 56 floors up
Opportunities for Al Awadhi to experiment came with the territory in her role as Head Pastry Chef at the Burj. “Our kitchen was the central one for the hotel. We produced all pastries and bread for its nine restaurants,” she explains.

Between preparing the food for each of the restaurants, including three fine-dining establishments, three buffet-style canteens, lounges, an afternoon tea room and the banquet hall, Al Awadhi also led the menu design, which was refreshed every three months.

Across the Burj Al Arab’s 56 floors, Al Awadhi’s favourite location may be a surprising one. “I just absolutely loved the lobby,” she says. “I had the most creative freedom there. It’s where you get your first impression as you walk into the building. It’s really important that people have an incredible dessert experience that welcomes them to the Burj: the most luxurious hotel in the world.” 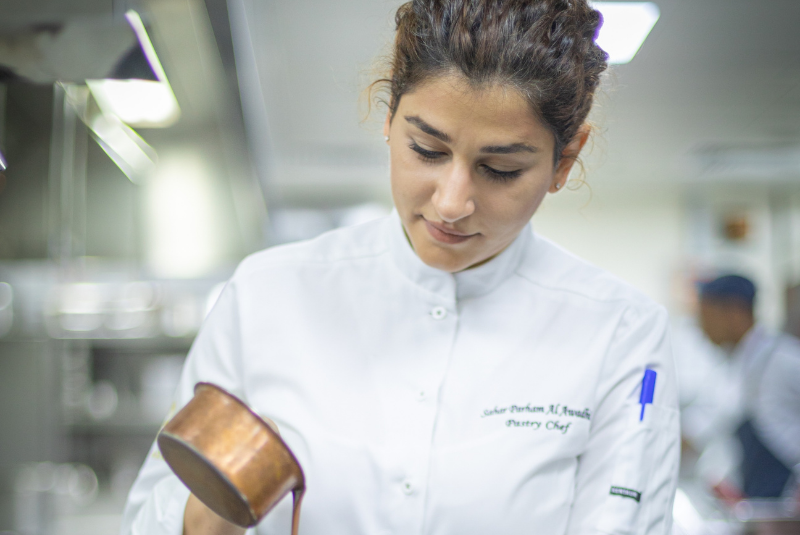 Breaking bread
While Al Awadhi’s pastries have already taken her to the great heights of Dubai’s monolithic Burj Al Arab, her career is still in its fledgling stage. After finishing a degree in advertising, Al Awadhi chose the marketing industry, but always knew that her true passion lay in cooking.

“I didn’t go to culinary school, but I did bake a lot at home so I started to research. I learnt the craft by watching videos, reading, then trying to remake dishes at home,” she explains. Seeing the spark in her eyes when she discussed her creations, her boss encouraged her to pursue her dream.

“It was amazing experience; they live and breathe bread. We started our shift at 3am and made bread for breakfast, lunch and dinner, fresh for every course,” she remembers, “and that’s something that I was adamant about at the Burj Al Arab as well.”

While burning the midnight oil, Al Awadhi learnt not just how to create the loaf, but to appreciate the crackle of every crust. “My mentor didn’t rely too much on measurements, so I discovered how to feel and look at the dough, rather than using recipes,” she says.

After returning from her whirlwind stage in Europe, Al Awadhi took up her post in chef Ani’s kitchen at Le Serre Bistro & Boulangerie in Dubai, where she continued to learn from one of the region’s prominent chefs.

“One of the most important things I learnt from chef Izu was to have respect for the everything in the restaurant, whether that’s not wasting an ingredient or even the way you fold your apron. When he came in in the morning, he would say hello to every single person in the kitchen individually,” says Al Awadhi.

She strove to include the philosophies of equality and inclusivity in her own kitchen. Having joined the Burj Al Arab as its first female chef, Al Awadhi went on to lead a much more gender-balanced group of 34 bakers.

“It was great to break that barrier and say 'there’s no gender in my kitchen'. For me, it doesn’t matter as long as you’re qualified. The high-pressure kitchen environment is changing as well. There’s more transparency and room for people to grow instead of being under pressure and tension all the time,” she reflects. 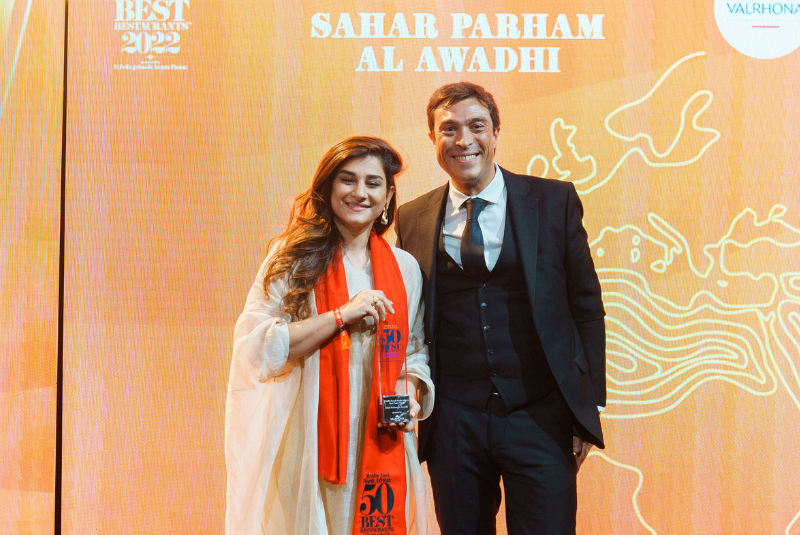 Made in the UAE
By drawing on local recipes, Al Awadhi also seeks out the best local ingredients for her dishes. While the UAE has been dependant on importation in the past, she explains how this food culture is gradually changing.

“People are growing all types of ingredients here and I don’t want to have to fly in my ingredients from all over the world. The more I can support agriculture in the UAE, the more they can do. It’s a supply and demand support system that helps us all grow as a community,” she says.

One of her signature dishes at the Chefs’ Feast for MENA's 50 Best, a take on the Rangeena (an Emirati sticky date dessert), exemplifies her focus on sustainability. Her incarnation is made with date syrup, candied oyster mushroom and Rangeena crumble. “For that dish, I didn’t have to reach far to create something special. As the biodiversity of the region is growing, as chefs, we become like children in a toy shop. We have so many more ingredients to play with,” Al Awadhi explains.

Winning the inaugural Best Pastry Chef Award, sponsored by Valrhona, was even more special for Al Awadhi as the awards ceremony took place in her home country. “Being from the UAE and growing up here made it such an honour and such a proud moment for me,” she explained.

Having left the Burj Al Arab in 2021, Al Awadhi has been working on projects with chefs and producers with a similar focus on biodiversity, which her latest accolade has helped her to achieve.

“It has been life changing. I’ve been looking at food in a different way recently and the award has helped to give me a bigger platform to showcase a more contemporary experience of the Emirates,” she concludes.