Karim Bourgi is a master of all things sweet. Born in Senegal to Lebanese parents, he gained his first taste of the culinary arts at age 10 helping the next-door baker after school. Chasing a career in the field, he moved to Paris at 16, where he graduated from the renowned Le Cordon Bleu pastry academy in 2000. After working in the city's lauded pastry boutiques Ladurée and Fauchon, he was approached to help open the latter’s new location at Abu Dhabi’s Etihad Towers in 2009. Revelling the opportunity, he left Paris for the Middle East as a qualified pâtissier and certified Francophile.

Chasing his destiny, he founded his first solo venture, Kayu Bakehouse, in 2021, which now has branches in Dubai and Riyadh. Here, Bourgi’s creations are as close as one can get to Paris without leaving the Middle East, with a full range of timeless French pastries on offer that would not look of place in the centre of Paris. His croissants and viennoiseries are golden and intricately layered; his macarons vibrant and delicate; his éclairs a masterclass in choux creation. One of his favourite bakes, the legendary Paris-Brest, is a visual marvel and a true showcase of his talent, both layered and exquisitely balanced.

However, Bourgi is not afraid to take risks. At Fauchon, he first began to inject French pastry traditionalism with Middle Eastern flair with the creation of a date and orange blossom éclair. At Kayu, his signature serve of the Animation Citron, containing local organic preserved lemon used heavily in Middle Eastern cuisine, has only further cemented his reputation. With a growing portfolio of venues, including Calla Café and Oppai ice cream shop in the UAE, Bamboo Restaurant in Lebanon and the soon-to-be-launched Pikado in Côte d'Ivoire, this is a certainly a pastry chef to watch.

Today, he also uses his pastry prowess to help train a new generation within the Middle East. Through a series of masterclasses and consultancy work, he is providing a growing number of aspiring pastry chefs with world-class education.

From the picture-perfect execution of traditional French fare supercharged by Middle Eastern ingredients to his contagious enthusiasm to share knowledge with future generations, Bourgi has become a landmark pastry chef in the region, following in the steps of Sahar Parham Al Awadhi as Middle East & North Africa’s Best Pastry Chef 2023, sponsored by Valrhona.

The MENA’s Best Pastry Chef Award aims to recognise and reward talent and excellence in the fields of desserts and pastry. The accolade is voted for by over 200 independent restaurant industry experts and well-travelled gourmets from across the region. 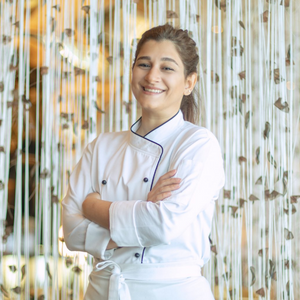