Kamal Mouzawak didn’t set out to transform Lebanon’s culinary scene. But with the creation of the country’s first farmers market, as well as several restaurants that promote and preserve regional food traditions, an organic produce shop and traditional guest homes, he has protected the diversity of Lebanese culinary heritage and united its people in the process.

As he’s honoured with the Foodics Icon Award for Middle East & North Africa’s 50 Best Restaurants 2022, Mouzawak offers a glimpse into the mind of a culinary changemaker

If Kamal Mouzawak hadn’t become a culinary entrepreneur, there is no doubt he would have found some other way of leaving a mark. His mission was clear to him since the beginning. “I was always anxious to do something to change the world,” he says. “I follow what Gandhi said: ‘Be the change you want to see.' That is the only thing I do. I don’t do restaurants. I don’t do farmers markets. These are just tools.”

Souk El Tayeb, Lebanon’s first farmers market, was created by Mouzawak in 2004, soon followed by many other projects aimed at promoting sustainable agriculture, supporting rural producers, preserving the country’s rich and diverse culinary culture and, most of all, uniting people around gastronomy. Today, he oversees a small empire of ventures, taking in everything from restaurants to guest homes, product shops to regional food festivals, educational programmes and community kitchens.

Now a recognised and respected figure in the Middle Eastern food scene, Mouzawak grew up in rural Lebanon. His grandfather and uncle were farmers and his family mainly ate produce from their own garden. Vines grew over the roof of their house – his sister would start eating grapes in mid-August, when they’re still a bit sour, while Mouzawak preferred them more mature and sweeter a few weeks later. In September, they would help pick apples, while in winter they had fresh oranges. Mouzawak remembers never seeing a single can in his childhood home. 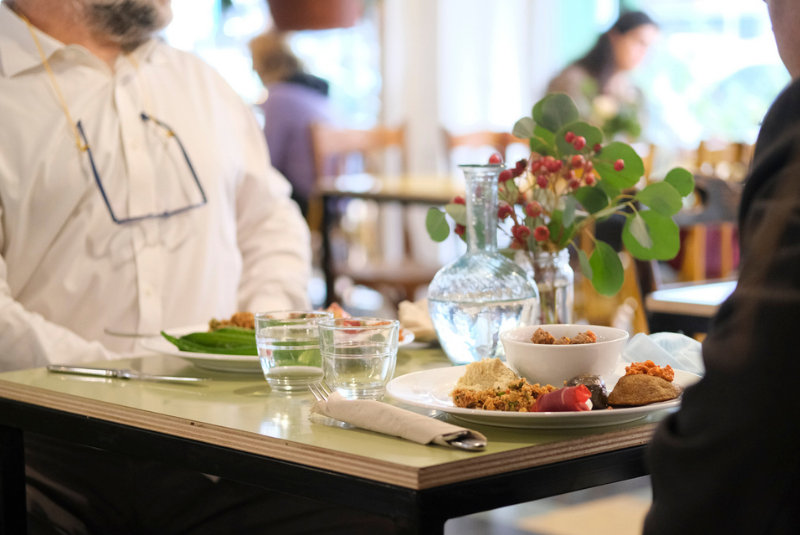 Mouzawak opened the first Tawlet in 2009, which functions like a farmers' kitchen

In the 1990s, he moved to Beirut to major in graphic design and worked at one of the city’s first cultural centres, founded by Lionel Ghorra, who Mouzawak considers to this day one of the biggest influences on his life. The cultural centre profoundly impressed him. “People were coming from all over Lebanon for a music concert or poetry reading,” he recalls. “It taught me about the importance of having a common ground. Even if we are different in terms of our origin or our politics or anything else, we can find a common denominator.”

These early experiences would go on to form the core of his life mission. After university, he worked as a food and travel writer, travelling widely across Lebanon, and his passion for gastronomy led him temporarily to become a TV chef, focusing on healthy recipes. In 2004, he was given the opportunity to curate the food corner of a garden show in Beirut. Mouzawak brought in about 10 rural farmers and producers to showcase their artisanal produce. The concept was so successful that he resolved to turn it into a formal project.

Souk El Tayeb opened on 10th June 2004 as a collection of producers’ stalls on a dusty street in Beirut. “’Souk’ means market and ‘tayeb’ means good in three senses: good taste, good person and the third Arabic meaning is ‘alive’,” explains Mouzawak. “Farmers markets are the best way to meet a new city. Not most of the markets we see today, where products are bought wholesale and then re-sold, but true producers’ markets, where the farmers come from a rural to an urban environment. It’s like a date between the countryside and the city.”

Still hosted every Wednesday and Saturday on Armenia Street in the Mar Mikhael neighbourhood of Beirut, Souk El Tayeb served as a platform to share not only food, but also traditions and conversation, giving people something to unite over and thus playing a part in healing the societal fractures that plagued the country after the Lebanese Civil War (1975-1990). Even during the 2006 conflict between Lebanon and Israel, the market came back after a few weeks’ hiatus, even stronger in its mission to bring people together.

“If we have religious or political differences, fair enough, we can fight about it as we did for such a long time in Lebanon, or we can look for similarities beyond differences. We can kill each other because of our differences, or we can find a common ground,” reflects Mouzawak.

“If we live on the same land and we have the same agriculture, then we share the same cuisine. And food is something you share with the other. So it's like telling each other: ‘Please come and have a piece of this cheese or a bowl of tabbouleh with me.’ It's something that includes the other, rather than excluding them.” 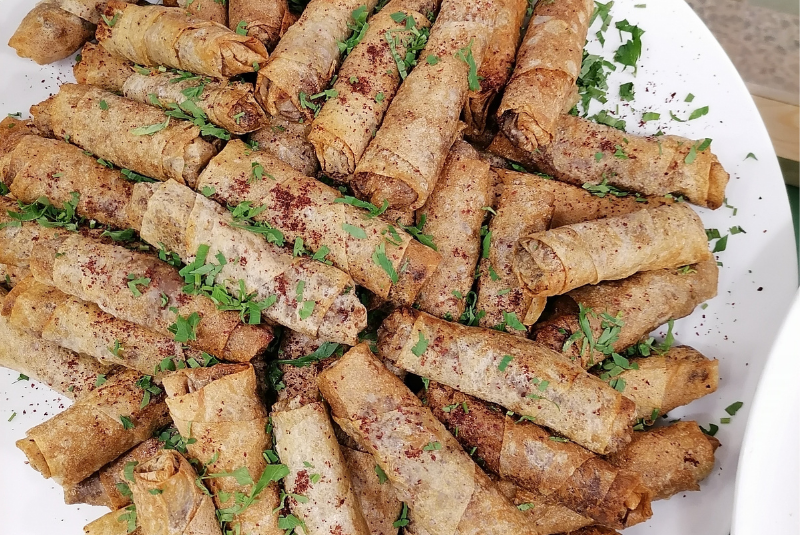 Msakhan djej, a popular dish that is served in one of Mouzawak's Tawlets in Mar Mikhael

“Make food, not war”
A few years after creating Souk El Tayeb, Mouzawak realised that he could do more than just bring farmers to the city. He could take city dwellers to the countryside to discover and experience regional food traditions. It was the beginning of a series of popular food festivals, during which local village women would prepare a feast for guests, introducing them to the local area’s traditional recipes and preparations. These women were often housewives, people who had dedicated their whole lives to raising a family and bringing food to the table.

In 2009, Mouzawak decided to bring these traditional meals back to Beirut and opened the first Tawlet, essentially a farmers’ kitchen, next to Souk El Tayeb. The restaurant employs dozens of women from villages across Lebanon, who take turns designing menus that showcase their own local dishes. A weekly menu might include specialties from the village of Kaitouly in South Lebanon alongside delicacies from Burj Hammoud, a town to the north-east of Beirut. 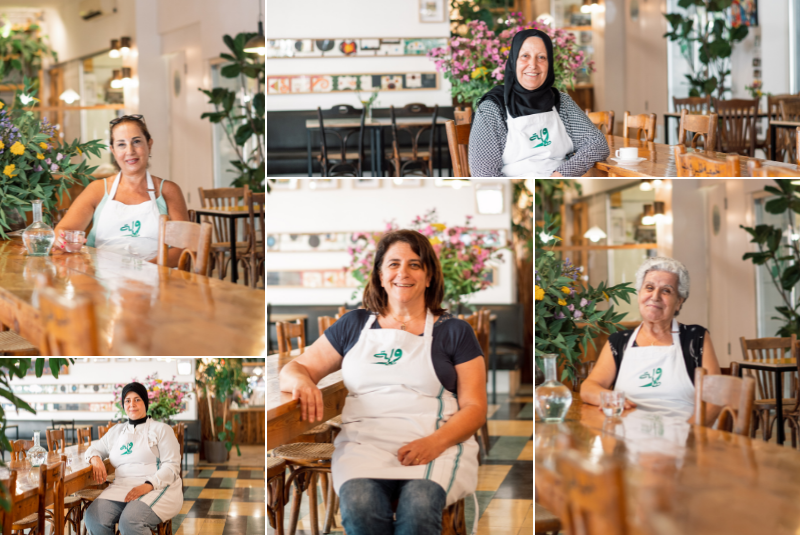 Women from all over Lebanon work at Tawlet, showcasing their local dishes and recipes

For many of these women, working at Tawlet was a turning point, allowing them to move their families to the city and put their children through school, or simply giving them the chance to be appreciated for their invaluable culinary knowledge. When he was invited to speak at René Redzepi’s Mad Food Symposium in Denmark, Mouzawak brought some of his cooks with him to prepare a meal for the many world-renowned chefs in attendance. For them, it was most of all a chance to show their pride in Lebanese food. The message Mouzawak delivered to the audience was 'Make food, not war'. 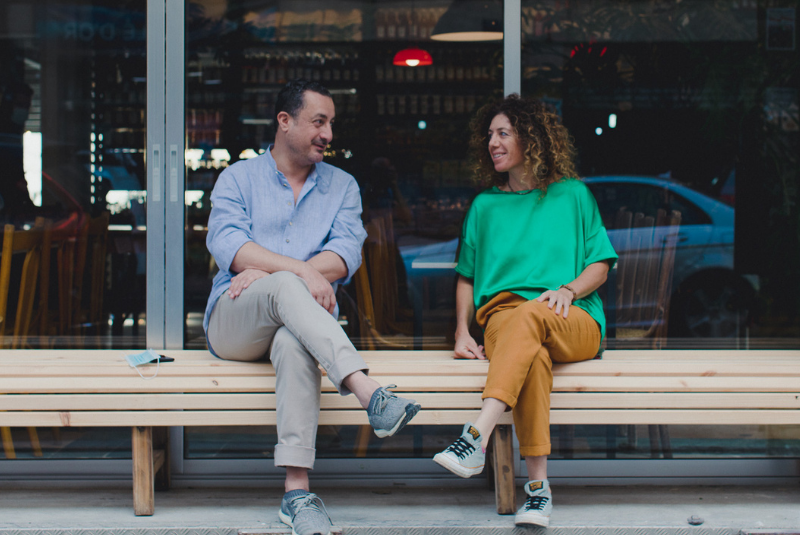 “It’s about changing people’s lives,” he reflects. “The food [at Tawlet] must be good to attract people, but it's about the finality, not the food. The food is going to help them have a better life and more dignity. This is what I call human development. It's not about money. It's not about stars. It's about giving people dignity to be free humans, that's all. Each person has a different tool. These women’s tool is their cuisine.”

These days, there are three Tawlets in Lebanon (one in Beirut, one in Ammiq and one in Deir El Qamar), alongside three traditional guest homes, named Beit, at the latter two locations and in Douma. In 2019, Mouzawak opened the first Dekenet, a permanent shop selling a selection of the products available at Souk El Tayeb. And in 2020, in the wake of the disastrous port explosion in Beirut, he created Matbakh El Kell, a community kitchen that to this day continues to deliver 2,500 daily meals to people in need in the city.

Alongside the difficulties brought on by the pandemic, Lebanon is also facing a financial crisis, with skyrocketing inflation rates and civil unrest. Within the current atmosphere, Mouzawak is adapting his projects, breaking them down into smaller models adapted to the new reality. He plans to continue supporting women in creating culinary concepts, while also opening the first Tawlet in Europe, Tawlet Paris, in January 2022, raising awareness of Lebanese cuisine across the world. 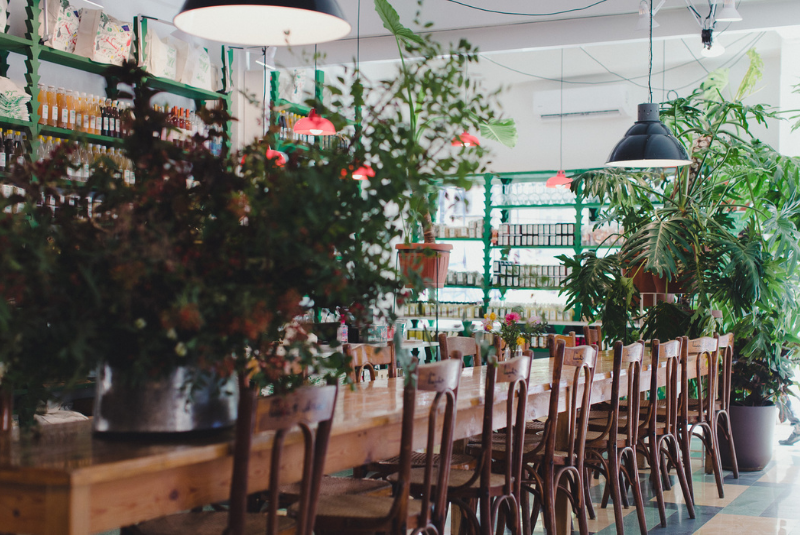 The Foodics Icon Award 2022 provides recognition for Mouzawak’s tireless work not only preserving gastronomic traditions and sustainable agriculture in the country, but also bringing together communities and creating a more inclusive society. “The award means a lot and it’s an amazing recognition,” he says. “Sometimes you need a pat on the shoulder on the personal level, and it also makes your job easier. If a movie receives an Oscar, your perception of that movie might change, even though it’s still the same movie. That’s why recognition is important; when something has better perception, people see it more.”

Now watch the video with Kamal Mouzawak:
Mouzawak will receive his recognition at the Middle East & North Africa’s 50 Best Restaurants 2022 awards ceremony, sponsored by S.Pellegrino & Acqua Panna, to be held in Abu Dhabi, UAE, on Monday 7th February. Visit the MENA’s 50 Best Restaurants website to discover how the list is being created and join the community on Instagram, Facebook, Twitter and YouTube to be the first to hear about the latest news and announcements.