Anissa Helou knew from an early age that she didn’t want a conventional life. Growing up between Lebanon and Syria in a family that grew and cooked plenty of traditional food from scratch, she always loved eating, but a discovery of the writings of French existentialist Simone de Beauvoir when she was a teenager led her to view cooking as a ‘domesticated’ activity and set her on a completely different course.

After putting together some savings working as an air hostess, she left Beirut at the age of 21 to study art history and interior design in London. She worked for the city’s most renowned fine arts company, Sotheby’s, then ran her own antique shop in Paris and later became an art adviser to members of the Kuwaiti ruling family. It wasn’t until she turned 42 that she published her first cookbook, called Lebanese Cuisine – a project that would mark the beginning of a whole new career and see her become one of the world’s most admired experts on the cuisines of the Middle East and North Africa.

For Helou, the igniting spark was the realisation that her mother’s authentic knowledge of Lebanon’s foodways and recipes would be lost when she passed away. With her birth country reeling from a civil war that took more than 120,000 lives between 1975 and 1990, she also realised that the Lebanese diaspora across the world didn’t have access to a book from which they could recreate the flavours of their childhoods.

Lebanese Cuisine didn’t only make the shortlist for the André Simon Book Awards, but also opened the floodgates of Helou’s writing potential. From seeing food as a hedonistic pursuit, she began to view it as a cultural and anthropological research project. Progressively expanding her knowledge of Mediterranean, Levantine and Middle Eastern cuisines, she has penned nine further books to date, many of which are widely considered classics.

From a tome on Mediterranean Street Food that won international honours at the 2002 Gourmand Awards to The Fifth Quarter: An Offal Cookbook, which was named the most innovative UK food book in 2005, Helou’s work has allowed the exiled Arab generation and their children to reconnect with their food roots, no matter where they are in the world.

Now 70 years old, Helou’s internal fire is burning brighter than ever. Her 2018 book, Feast: The Food of the Islamic World, was the first major book on the subject and won the James Beard Foundation’s International Cookbook Award. She published another ground-breaking book, Saudi Feast, in September 2022, and is currently working on a project to record Lebanon’s regional cuisines while also thinking of opening a teaching school in Sicily, Italy, where she is now based part-time.

Throughout her career, Helou has proven that the only limits that exist are those you set for yourself. As well as carrying out invaluable work in preserving culinary traditions for the region’s diaspora, she also introduced the wider world to the rich gastronomic cultures of the Middle East. If hummus, tahini and za’atar are now available in supermarkets across the world, it is in part thanks to Helou’s tireless efforts, which are more than worthy of the Foodics Icon Award 2023.

Now read the interview and watch the video with Anissa Helou: 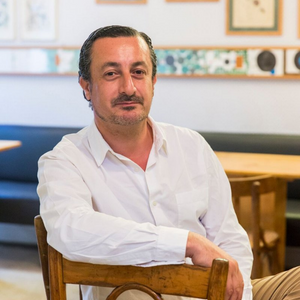