Inside Odette: four signature dishes by chef Julien Royer at The Best Restaurant in Asia

Julien Royer, chef-owner of the new No.1 restaurant in Asia, Odette, describes the thought process behind some of his most iconic creations

It may seem odd that The Best Restaurant in Asia serves French-influenced cuisine, but since opening Odette in 2015, Auvergne-born cook Julien Royer has added more and more Asian influence to his menu, taking inspiration from his travels to develop his own brand of local flavour. Here he explains how he brings ingredients from all over Asia to his fine-dining restaurant within Singapore’s National Gallery. 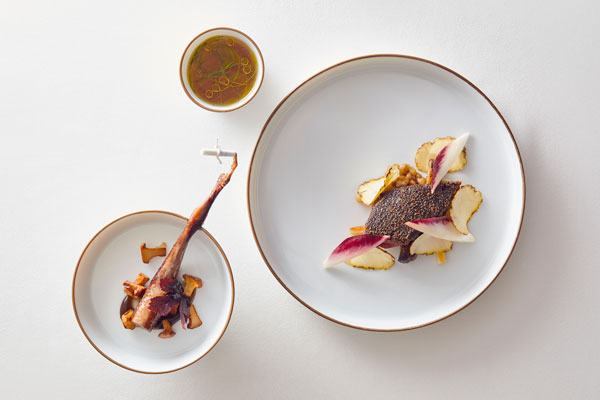 “This is a dish that represents our cooking really well. It is pigeon crusted with a Cambodian pepper called Kampot pepper. The pigeon is served in different ways – yakitori made with the heart; a very light and modern version of a parfait, made with the liver; then the breast is crusted with this beautiful, very fragrant, very long-lasting-in-your-mouth pepper from Kampot, Cambodia.

“We had to try many different recipes just to have the right amount of spices. This is a dish that really emphasises what I believe in in terms of sourcing, because we source the bird from a very specific part of France – it comes from Brittany – and we source pepper that really represents the spiciness of Southeast Asia. We use cooking techniques that are French but also Japanese, such as a little yakitori on a binchotan charcoal.”

“This dish is quite simple. It is crab meat – at the moment we’re using a crab called kegani crab, which is Japanese. It is gently steamed and seasoned with a very light mayonnaise. We add a little bit of an Asian twist with a sorbet made of apple juice, ginger juice and a touch of wasabi as well as a mayonnaise made with Vadouvan spices. It’s like a French version of curry – it’s crab with apple and curry.”

“This dish is inspired by my travels in Vietnam. It’s a foie gras dish that we serve as a Vietnamese pho, so it’s a foie gras in a broth with a lot of very fragrant herbs such as mint, coriander, chervil and tarragon. The foie gras is gently poached and what I’m looking for in that dish is the texture of the foie gras, which really melts in your mouth. To play with that, we bring contrast by using Japanese abalone to bring some nice chewiness to the dish – in the good sense of the term. We use some pickled shitake mushroom, which brings another layer of texture and another layer of flavour, so this is a dish that really represents the evolution of our cooking. It’s very simple to look at but very complex in terms of flavour and very interesting and gourmand.”

“This dish was started using Amalfi or Menton lemons but we evolved it to use yuzu instead as I wanted to create a lighter version of the classic citrus tart. Lemon tarts are among my favourite desserts but I often found them too heavy or too sweet after a long meal. I wanted to create some freshness with a play on temperature and acidity, which is why we combined shiso basil sorbet with this very light yuzu-sake foam.”

Now go inside the kitchen of The Best Restaurant in Asia, sponsored by S.Pellegrino and Acqua Panna, to see Chef Royer create his dishes: