While venues across Hong Kong restructured and redesigned operations to work their way through the 2020 pandemic, Agung Prabowo and Roman Ghale were putting the finishing touches to a bar they hoped would shake up the city’s cocktail scene. Their latest opening Penicillin, created in collaboration with their wives Laura and Katy, aims to become the first zero-waste bar in the city and today receives the Ketel One Sustainable Bar Award for Asia’s 50 Best Bars 2021. We talk to the venue’s four founders to discover the inside story of their success

At Penicillin, there are endless examples of the kind of things you can do when you stop seeing kitchen and bar waste as worthless. You can, for instance, press the peel and leftover pieces from cassava chips into a juice to be paired with guava leaf tequila, lime and marigold to make a cocktail. Or you can use excess pieces of bread and cheese to infuse new spirits, such as ‘discarded bread vodka’ and ‘spiced cheese liquor’ – both are ingredients in a drink called Modernist Science that also features white miso pineapple and salted egg yolk.

The bar’s founders – Agung Prabowo and Roman Ghale, formerly of Hong Kong’s The Old Man (No.1 in Asia’s 50 Best Bars 2019), and their wives Laura Prabowo and Katy Ghale – are seasoned hospitality veterans, but Penicillin is their first foray into attempting to create a ‘closed-loop’ system of production. This means not only recycling and upcycling ingredients, but also brainstorming new ways of minimising waste, reducing the bar’s carbon footprint and sourcing produce locally and seasonally. 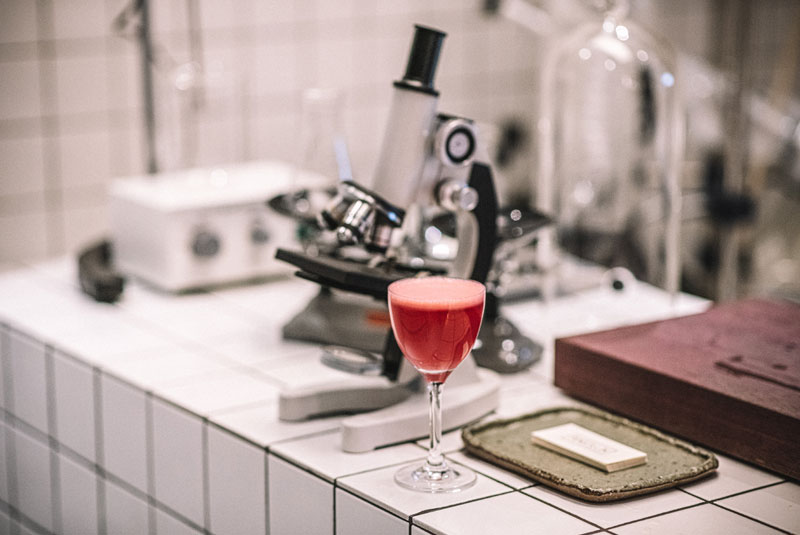 “We’ve been so spoiled in the past,” admits Agung, who was also the winner of the Industry Icon Award for Asia’s 50 Best Bars 2020. “We were ordering ingredients from everywhere and there was so much wastage. But with the pandemic forcing every single human being to do things differently, we started to see what Hong Kong needed in terms of sustainability in the next three to five years.”

With both couples having young kids, the drive to do something positive for the future was also strong. “For us, this is a commitment,” says Katy. “It was kind of our original concept that we do this not only for ourselves, but also to leave the Earth in a better state for the next generation.”

The idea for Penicillin – which opened on Hollywood Road in November 2020 – forced the founders to rethink their business model entirely, while also challenging them with new operational issues. As they scouted for ingredients from local farms in Hong Kong’s New Territories, for instance, they realised that a small bar like Penicillin wouldn’t use the large quantities of produce often needed to make an order. The solution, as it often happens, was to be found in balance, with the quartet simultaneously opening a second new bar in Hong Kong: Dead&. 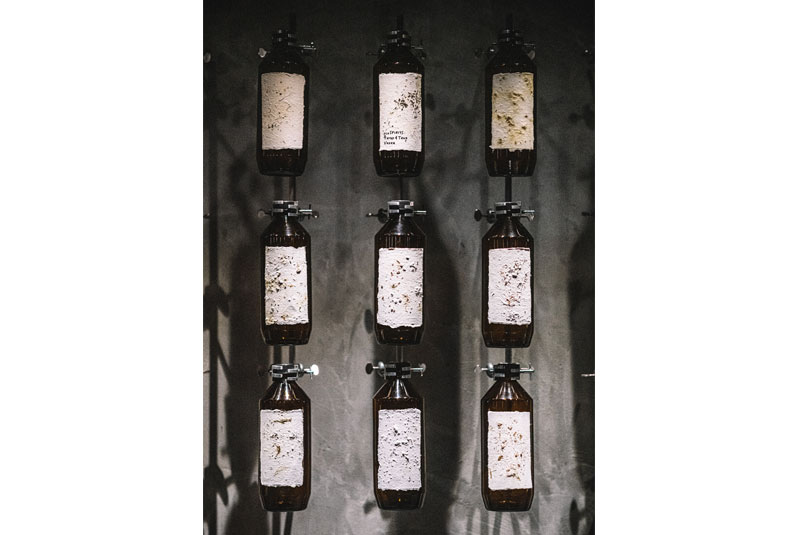 Penicillin's bottle labels are made from scraps in the bar's laboratory

The “180-degree opposite side of Penicillin”, as Agung describes it, Dead& is a dive bar that focuses on high-volume drinks, cocktails on tap and even canned beers available from a vending machine. However, it is through the collaboration between the two venues that Penicillin is getting closer to closing the production loop and reducing their waste to near-zero.

“Dead& is the bar that supports the ingredient sourcing for Penicillin,” explains Agung. “There, we also use paper cups. Together with leftover seeds, herbs and coffee grounds, the used paper cups are recycled to make our own coasters, paper for the Penicillin menus and handwritten bottle labels.”

At the moment, Penicillin operates at a level the founders estimate as “80% sustainability” – but their plan is to continue finding new ways to reduce waste and improving their practices through 2021 and beyond, all to set a new model for the hospitality industry. 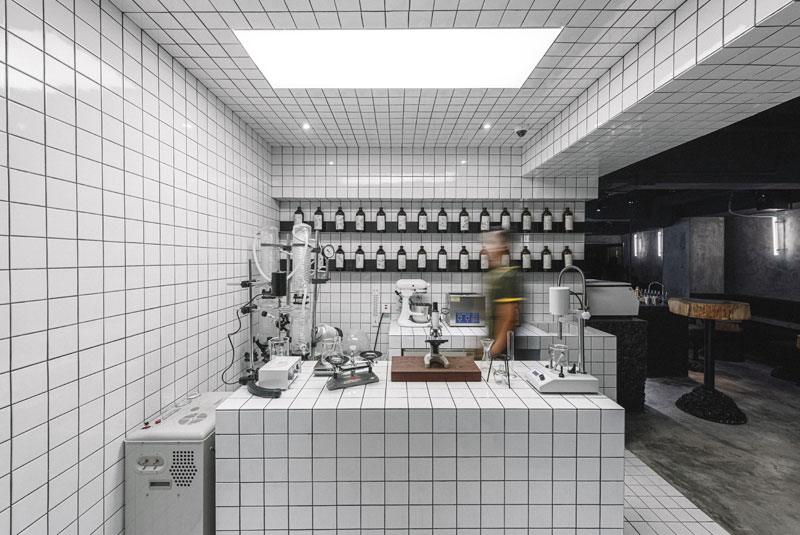 “We want to be the pioneer bar in Hong Kong,” shares Katy. “We also want people to know that there are so many ways to do sustainability – it’s not only about not using plastic straws or cups.” Laura echoes this sentiment: “When people come to Penicillin, we want to give them a message that they can become ambassadors for sustainability, so that they can start it in their daily lives – not just follow a trend,” she states.

“And we would love to see future bars in Hong Kong doing more sustainable things,” adds Roman. “However, everybody needs to have discipline and commitment. That’s the big thing. If you’re doing something sustainable today, but you don’t have the discipline to do it again tomorrow, that doesn’t really make sense.”

The founders are doing everything they can to put their money where their mouths are. From using the bar’s laboratory and rotary evaporator machine to make hand sanitiser from leftover ingredients and redistilled vodka, to sourcing wood from the fallen debris of the 2018 Mangkhut tropical storm to make tables, every aspect of Penicillin tells a story about a bar that wants to start a revolution. 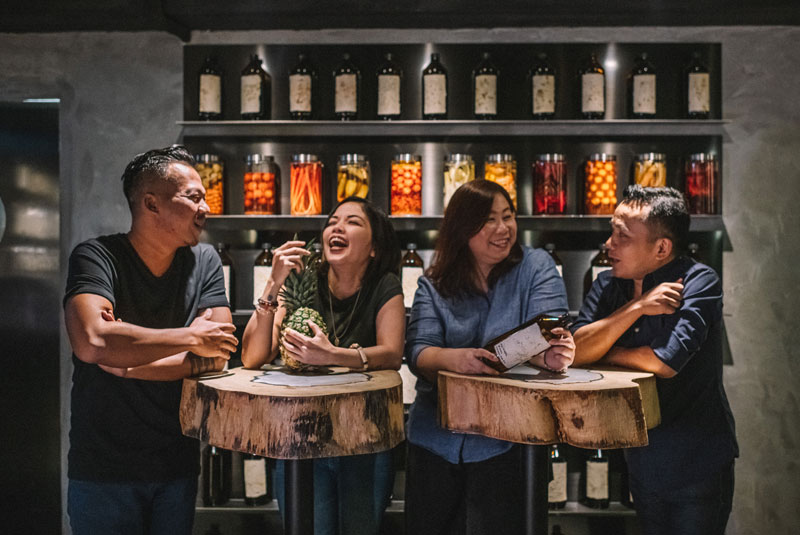 If a sip of a drink could tell the venue’s story, it would be a taste of One Penicillin, One Tree, a cocktail created in partnership with EcoSpirits – a supplier that delivers liquors in reusable containers rather than single-use bottles. For every drink purchased by a customer, Penicillin donates US$3 to The Forest Programme, which is planting Mallotus Muticus trees – a fast-growing upper canopy tree that reaches up to 42 meters in height and lives for more than 200 years – in Borneo. Over its lifespan in the rainforest, one Mallotus Muticus will eliminate an impressive 4,400kg of CO2, equivalent to the carbon footprint of about 8,000 single-use glass spirit bottles.

As they receive the last of the pre-announced special awards ahead of the announcement of Asia’s 50 Best Bars 2021, sponsored by Perrier, on 6th May, the Penicillin founders are feeling reinvigorated. “We are very proud to receive the Ketel One Sustainable Bar Award,” says Laura. “It gives us more energy to keep doing what we’re doing and to make sure that people in Hong Kong and beyond implement small changes in their daily lives.”

Like the antibiotic after which it is named, Penicillin is the Petri dish that could germinate a ground-breaking new model for others to follow. “During a difficult situation like the one we’re in now, our dream is to get our return on investment on the new bars as soon as possible,” says Agung, only half-jokingly. “But really, our dream is all about inspiring other businessmen and entrepreneurs to take the first step towards sustainability.”

Discover what makes Penicillin unique in the video: