As a culinary and cultural destination, Vietnam has been on the rise in recent years – and at the forefront of the country’s contemporary gastronomic evolution stands former investment banker Peter Cuong Franklin. 50 Best charts the extraordinary personal and professional journey that led to the chef-restaurateur’s Anăn Saigon being named The Best Restaurant in Vietnam 2021

On 29th April, 1975, 12-year-old Peter Cuong Franklin was airlifted out of Saigon by helicopter, one of the wave of child refugees evacuated from South Vietnam on the final day of the long and messy civil war before North Vietnamese forces took full control of the country.

Franklin was adopted by a US naval family, went on to receive a stellar education eventually leading to a place at Yale, and adjusted to a privileged American way of life. Yet he was separated from his birth mother, who had remained in Vietnam, and with no means of contacting her, he feared she may have passed away.

Fast-forward 20 years and Franklin was a cosmopolitan Vietnamese-American working as an investment banker in Hong Kong, following similar roles in New York and London. A friend who happened to originate from the same rural village was returning to the country of their birth, and so Franklin tasked him with finding out if his mum was still alive. The mission was successful – and the banker flew to Vietnam for a reunion he describes, in his understated way, as “certainly quite emotional”.

Now, in 2021, Franklin is a chef and restaurateur whose Anăn Saigon is the winner of The Best Restaurant in Vietnam Award as part of Asia’s 50 Best Restaurants 2021. But what prompted him to return to live and work in his birthland after so many years away? “I never forgot my mother’s food from those early years. She remains my true culinary inspiration,” he says. 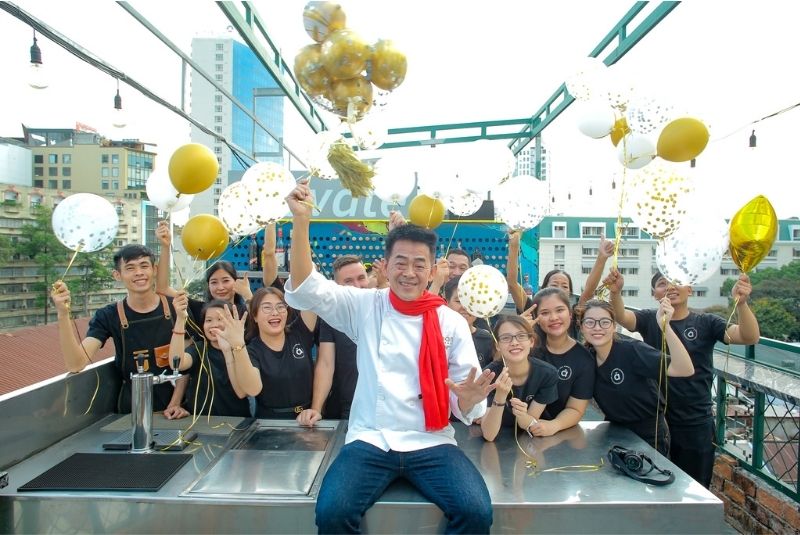 Anăn Saigon in the culmination of Franklin’s circuitous personal and professional journey to date – not that he shows any signs of resting on his laurels. Located bang in the middle of Ho Chi Minh City’s oldest and only remaining wet market since opening in 2016, Anăn (which translates as ‘eat eat’) elevates street food-inspired Vietnamese dishes to new levels.

“Vietnamese cuisine is known for its value and flavour, but not its sophistication. Higher end restaurants were only really for Westerners and most were French as a result of the colonial legacy,” Franklin explains. “I thought the more interesting option was to combine the flavours of the country’s traditional cuisine with contemporary techniques in a fine dining environment, but still with plenty of Vietnamese hospitality.”

This manifests itself in standout dishes on Anăn’s tasting menu (there’s also an à la carte option) including the One Bite Pho – a tradition-busting take on the country’s most famous dish that includes wagyu beef and black truffle in spherified pho broth. The chef’s Caviar Bánh Nhúng similarly blends the humble with the luxurious: inspired by a traditional waffle cake often found at street food markets in Vietnam, a crispy pastry shell made from rice flour and egg is filled with salmon caviar, smoked salmon and crème fraiche. And with an eye for smart marketing, there’s an attention-grabbing off-the-menu ‘$100 bánh mí’, which deliberately subverts the staple nature of Viet sandwich by reframing it as an extravagant treat – adding foie gras, the highest-quality pork, a secret herb mix and a glass of something sparkling on the side. 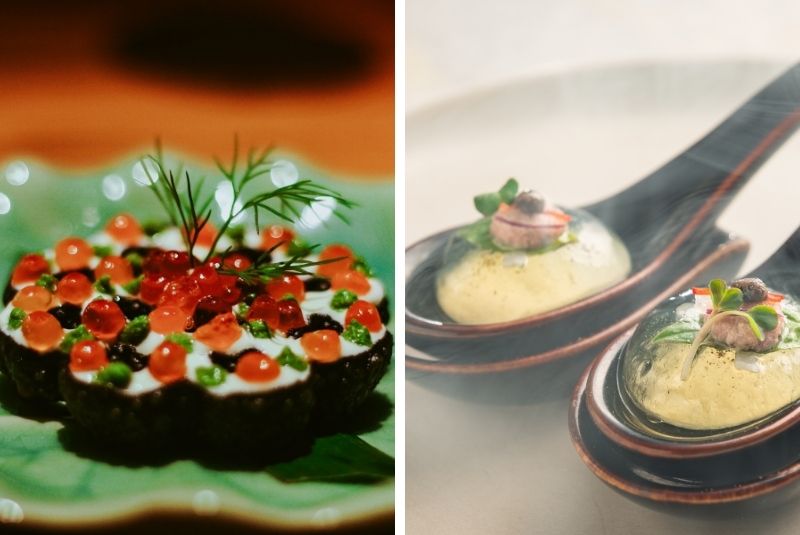 “We like to push the boundaries,” says the chef. “We’ve recently set up an R&D lab at Anăn and are working on lots of fermentation techniques, including learning from the sake-making process and applying it to our traditional rice wine. It’s all about extracting maximum flavour.”

Franklin openly acknowledges the debts some of his dishes owe to inspirational fellow chefs such as Ferran Adrià and Massimo Bottura but – despite his business background – he has plenty of cooking pedigree himself. When he quit his comfortable life in middle-age to pursue his passion for food he staged in many of the world’s foremost kitchens, including Alinea in Chicago, Caprice in Hong Kong and Nahm in Bangkok to soak up as much knowledge as possible.

He then opened a private kitchen in Hong Kong, before going on to enjoy commercial and critical success with his debut restaurant, ChômChôm. That said, it was not without teething problems: “At first people thought the prices were too high and the portions too small for a Vietnamese restaurant. We focused on a lot of grill dishes and small plates, but customers were asking: ‘Where is the pho? Where is the bánh mí?’ It showed how prevalent stereotypes are about certain cuisines, especially in other countries. But Hong Kong was a great place to start out – it’s competitive and fast-moving and I gradually developed my own cooking style and skill.” 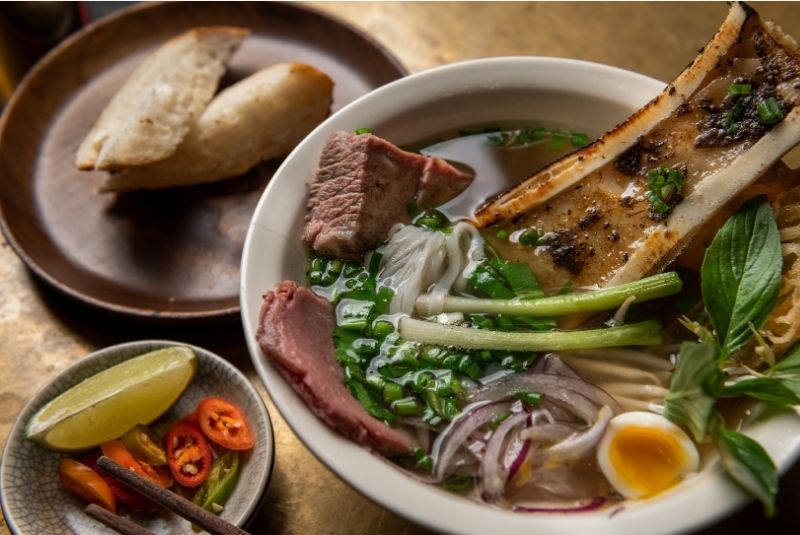 In 2016, Franklin felt the pull to return to ‘home’. “Hong Kong was changing... and I saw a bright future in Vietnam, both economically and in culinary terms,” he comments. Over the last five years, that gamble has more than paid out, with the country emerging as a rising force in South-East Asia. Anăn now occupies multiple stories of its compact shophouse premises, including the main restaurant over the first two floors, the Nhau Nhau (‘drink drink’) cocktail bar above, then the recently opened Pot au Pho noodle bar, all topped with a rooftop terrace dining space.

The ever-evolving concepts reflect Franklin’s own enduring appetite for experimentation and reinvention. He’s excited about the R&D kitchen feeding its findings into the drinks and food menus, and says that the proximity to the market means his team has endless fresh ingredients on the doorstep to play around with.

“The bar is about reimagining and celebrating the traditional nhau street drinking culture in a more sophisticated way,” he says. “The bar scene in Saigon [as many locals still call the city] is really vibrant. There’s also a young generation of Vietnamese chefs doing great things and all feeding off each other.” 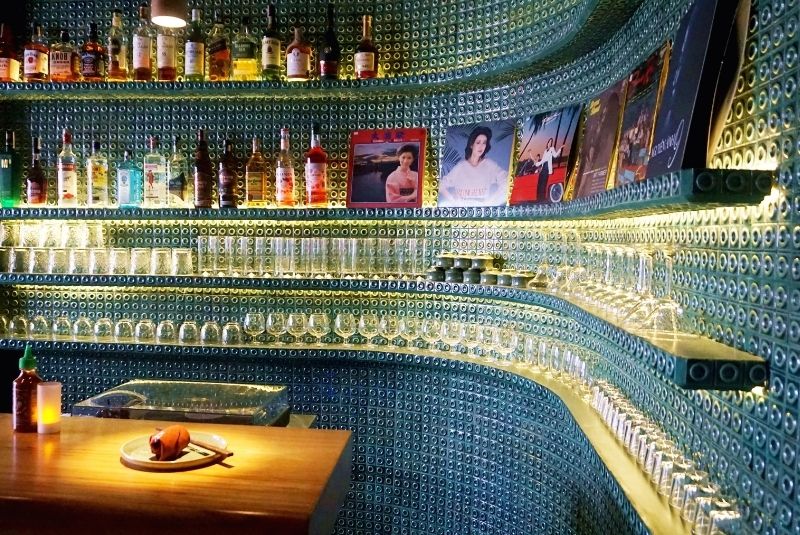 The country has, to date, been one of the pandemic success stories of the region, with relatively few Covid-19 cases recorded. “At first, the sudden lack of international travellers hit us hard. It was a rough period,” admits Franklin. “But then we rebuilt and the focus on local guests has been super successful. We’ve also had many what you might call ‘local tourists’ from other parts of the country, who would otherwise be travelling and eating abroad.”

There is no doubt Franklin has become a respected ambassador for his country’s cuisine, both locally and internationally. He invests his time heavily in developing the next generation, as a mentor to upcoming cooks and as a board member of the Streets International charity helping disadvantaged youths into work.

He also retains a deep respect for the history and traditions of the country – a reverence perhaps enhanced by his sudden separation at a young age and ensuing period of distance. Franklin’s mother is alive and well, if frail, and still living in the country’s Central Highlands region. He returns to visit her often. “For my mum, I’ll be a kid forever. So when I go to see her, she insists on feeding me. I’m not allowed to cook. The only difference is that now I’m allowed a beer with my noodle soup!”