As the first of two special pre-announced awards as part of The World’s 50 Best Bars 2021 programme, Salmon Guru is kicking off the countdown to the ceremony on 7th December as it is today named the winner of the Michter’s Art of Hospitality Award. 50 Best speaks to ‘maestro coctelero’ Diego Cabrera about his philosophy, creativity and what the award means to his team

Everything at Salmon Guru is designed for the guest. From the whacky drinks to the neon-lit lounge, the bar’s founder Diego Cabrera manages every detail to ensure his customers enjoy an unforgettable visit. It’s unsurprising that he – and his dedicated team who he attributes the bar’s success to – are awarded this year’s Michter’s Art of Hospitality Award.

“I think this is one of the most important years of my life,” starts Cabrera. “When 50 Best called me to say Salmon Guru had won the award – it was amazing, unbelievable. We all cried together.”

As with all hospitality venues across the world, the Salmon Guru team had a tough 2020. Contending with a lockdown in Madrid and a long closure with limited government support, Cabrera welcomed the city’s reopening and the return of community.

“All of 2020 was difficult. We were very glad to see the locals when restrictions ended in Madrid. We have more guests now than before lockdown and we hope the numbers will keep growing,” he says.

While the team could not play host to guests during the pandemic, they went above and beyond by extending a hand to many struggling small businesses. “We have a great community around us and we collaborated with local producers and artisans to create shops inside the bar,” explains Cabrera.

A cocktail anthology in Madrid’s Literary Quarter
Entering Salmon Guru is a treat for the eyes. Each of the three main rooms are adorned with a different theme and atmosphere. The main space hosts a large bar and a tropical vibe, in-keeping with the drinks themselves, which use the visual cues of Venus fly traps and phosphorescent tree frogs, while a smaller room intimates the glamour of Hollywood’s golden age. Cabrera’s favourite is the third: a semi-private space inspired by the ‘Ka-Pow’ and ‘Bam’ of the vintage comic book oeuvre.

“When we first created the space years ago, people thought we were crazy,” grins Cabrera, “but it’s my favourite because it’s so creative. The look and feel is strange and it has a lot of personality.”

While the floorplan may be labyrinthine, the friendly faces of the Salmon Guru team are with you every step of the way. “I hope that when you go into Salmon Guru for the first time, it feels like home,” says Cabrera. “I want it to feel as though everybody knows your name and they have seen you before.”

The unfailing execution and experience of the team embody Cabrera’s ethos of ‘five-star service in a casual setting’.

The Guru’s enlightenment
The reopening of Salmon Guru has undoubtedly inspired Cabrera and his team to reach for greater heights. “In August and September, we had a lot of good news and we changed the energy,” says Cabrera. “When we reopened, we wanted to surprise. So, while our philosophy is the same, we are doing more creative things.”

Working tirelessly during the lockdown, the team devised a whole new menu. Split by evocative headings such as ‘Sour’, ‘Powerful’ and ‘Crazy Things’, each of the cocktails are whimsically entertaining but also carry a story.

“I think our menu is amazing because the whole team has participated in its creation. Not only in the cocktails but the tools and the glasses, too,” he explains. The glasses are custom made and feature liquid creations such as Flower Power 3.0, a concoction of vodka, hibiscus and orange blossom and passion fruit purée, which resides in an extravagant open-mouthed angler fish. 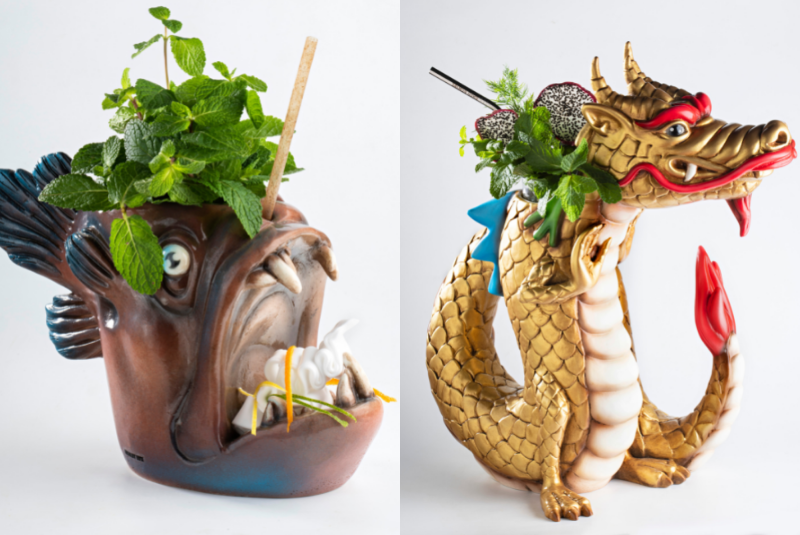 Another Salmon Guru showstopper is Dragon Daughter. The scaly, golden creature-themed glass is filled with rum, dried fruit and horchata syrup, mixed with passion fruit purée and pineapple juice. When you combine the creativity in the liquid with the vessel it is served in, it’s clear that Cabrera is a man who does not mind taking things to the limit to evoke shock, awe and, essentially, what amounts to one of the most memorable guest experiences.

Fresh from the achievement of the Michter’s Art of Hospitality Award 2021, the Salmon Guru team are excited to continue developing their offering and service. “It’s in our philosophy at Salmon Guru,” says Cabrera, “instead of waiting for things to happen, we always try to move towards the future.” The bar community waits with bated breath to see what comes next.

Watch the video about Salmon Guru, winner of the Michter's Art of Hospitality Award: