Rooted in principles of ancient kaiseki cuisine, chef Seiji Yamamoto celebrates the purity of flavour found in hyper-seasonal Japanese ingredients, elevating them into small works of art through modern technique at his seminal Tokyo restaurant. Since Nihonryori RyuGin debuted in 2003, Yamamoto has become one of Japan’s leading figures in progressive kaiseki cookery, pioneering the style and earning a top 10 spot in every edition of Asia’s 50 Best Restaurants. Here’s why Yamamoto is one of this century’s most visionary Japanese chefs, and the first ever American Express Icon Award winner. 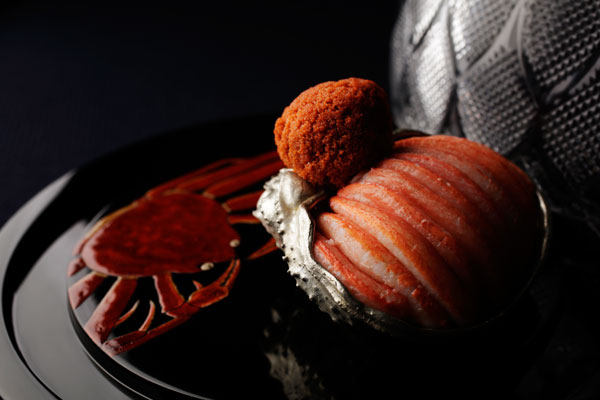 Today, kaiseki is considered Japan’s highest form of culinary art, yet it’s a style of cuisine that dates back centuries to its more humble beginnings as the meal served during Japanese tea ceremonies. Kaiseki meals centre on a series of small, beautifully presented dishes based around the idea of balance – with respect to colour, flavour, temperature, texture, and aroma – made from local and seasonal ingredients.

Many kaiseki chefs adhere to a more traditional approach to serving such a meal (with regard to dish preparation and meal progression), but when Yamamoto opened RyuGin over 15 years ago, he became one of the first chefs to successfully integrate avant-garde cooking techniques into classic kaiseki cookery. “I love the classic, traditional style of Japanese cuisine,” states Yamamoto. But, he admits, “there are lots of things that I think could be done better.”

Expressing the richness of nature

RyuGin’s seasonally driven, 12-course omakase (chef’s choice) tells the story of Japan’s best ingredients at the peak of ripeness. Depending on the season, diners will spin through a menu of dishes like ayu (sweetfish) in the summer; matsubagani crabs in the fall; and fugu (blowfish) during the winter. “Japanese cuisine expresses the richness of nature,” states Yamamoto, adding that, “the most precious thing is not the technology that human beings possess, but the materials themselves that cannot be produced by human skills.” Hence the chef’s dedication to Japan’s finest – and often challenging to source – products.

As is true for kaiseki cuisine, RyuGin’s ever-changing menu is built around Japan’s best seasonal ingredients. While Yamamoto typically overhauls RyuGin’s menu eight times per year, when a regular comes in to dine more than once during a given menu run, Yamamoto keeps notes on what he or she previously ate, and will serve an entirely new bill of fare. 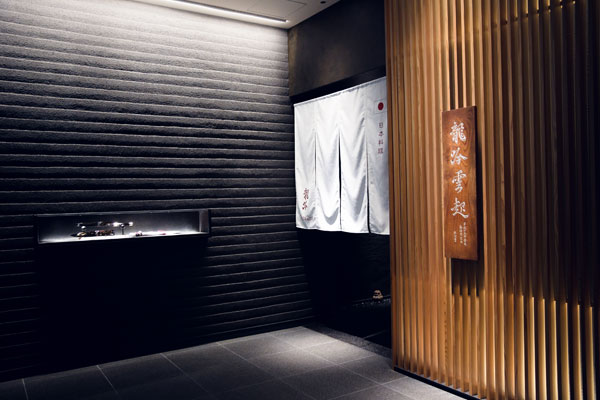 There’s a certain finesse and understanding of ingredients a chef must possess in order to create revelatory dishes from seemingly few, simply cooked ingredients. For example, matsutake mushroom in a light dashi broth, unadorned hirame sashimi with wasabi, and grilled nodoguro (blackthroat seaperch). It is Yamamoto’s expert work behind the scenes, the curing of fish, the hours – if not days – simmering a rich kombu broth, that diners don’t necessarily see on the plate or in the bowl, but taste on the palate. It is also his ability to elevate these wholesome ingredients – without butter, cream, or classic luxury ingredients – into world-class dishes.

Unless a chef is cooking meat, the temperature of an ingredient isn’t typically the number one concern. But for Yamamoto, vitality is the core of a successful plate. Says the chef, “Temperature and scent … are the life of the dish.” Traditionally, during a kaiseki meal the diner will experience dishes that incorporate all methods of cooking, from raw ingredients to grilled, steamed, boiled, fried and roasted. Yamamoto focuses his attention on serving completed dishes at precise temperatures. He adds: “I treasure the temperature more than the details of the preparation.”

Cooking from the heart as an ambassador to Japan

“I feel joyful now that I can deliver Japanese cuisine from this Japanese capital, Tokyo,” says Yamamoto. “I love Japan and, because I am Japanese, I choose Japanese cuisine.” It is clear how seriously the chef takes his role as a global ambassador of his country's gastronomy, seeking to give diners a taste of something extraordinary. “My style is to provide guests with natural ingredients that cannot be produced by human skills or seasoning,” he says. “I cherish the taste of the natural materials in Japan.”