With an almost perfect sustainability score, Septime in Paris wins this year’s Sustainable Restaurant Award, sponsored by Silestone. Here's how they did it.

Just as it looked as if Christian Puglisi’s Relae couldn’t be beaten – with two years at the top of the sustainability chart and a near-100% rating for its environmentally friendly practices – along came Septime and pipped it to the post. Chef Bertrand Grébaut and business partner Théo Pourriat’s Paris restaurant is doing almost everything right, from fair treatment of each person in the food chain to keeping a low carbon footprint – and in the process they’ve also climbed to No.35 in The World’s 50 Best Restaurants after re-entering the list last year at No.50.

Unlike most of the individual awards in The World’s 50 Best Restaurants, which are voted by a panel of 1,040 industry experts around the globe, entry to The Sustainable Restaurant Award is via self-nomination. This year, all restaurants voted 1st to 100th were eligible. After entering the running for the award, each restaurant completes a series of questions to determine its environmental and social responsibility rating, according to the Sustainable Restaurant Association’s Food Made Good system. The restaurant with the highest score wins the award. Here are a few of the things that helped Septime win.

Of the produce used at Septime, 99% is grown in France – the exceptions being coffee, sugar, vanilla and certain citrus fruits. The restaurant recently invested in a farm near Paris and also sources from a number of urban farmers within the city.

Like former winner Azurmendi, Septime is into seed preservation – the restaurant works with farmer Christophe Collini and 10 other chefs to save 1,400 seed varieties in a project called Conservatoire du Gout.

Veg accounts for 80% of the menu at Septime, with dishes such as roasted cauliflower, pickled pears, bottarga and seaweed butter. 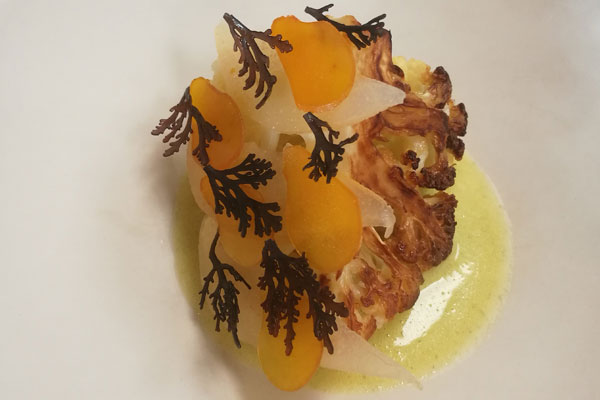 When using meat in the restaurant, chef Grébaut buys the entire animal and uses it seasonally, enhancing the more unconventional cuts in terrines and broths or in staff meals.

Because of the negative environmental impact of beef and the difficulty of finding meat that meets Septime’s high standards (France is more geared towards dairy than beef cow production), the restaurant doesn’t serve beef. 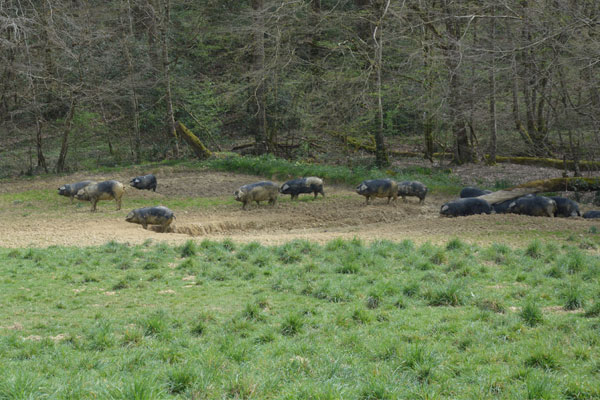 Some of the pigs used by Septime

Septime only deals with fishermen using 12m or smaller boats focusing on sustainable methods – angling, bottom gillnets, traps and trammels, coastal and dive fishing – which limits the impact on the marine environment. The previous day’s catch determines what goes on the menu. Grébaut also favours a number of less ‘fashionable’ fish, such as sardines, hake, horse mackerel and pouting.

The restaurant sources seafood from a supplier who deals directly with small-scale French fishermen and pays 20% more than the market price. In some cases, Septime asks farmers to plant special vegetables and then guarantees to buy all of the produce at the best price. 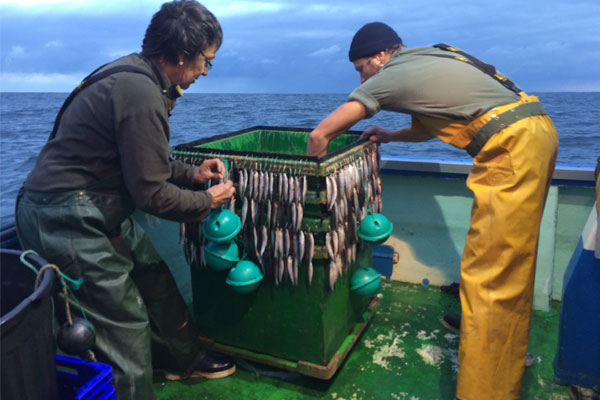 Two of Septime's fishermen in action

Septime has its own 2.5-acre vineyard in Saint Emilion, which is being converted to biodynamic production. All the wine served at the restaurant is natural and much of it delivered by barge from the Rhone to Paris. The producers refuse all forms of pesticides, herbicides and other synthetic chemicals often used in winemaking. The restaurant also supports vineyards hit by recurrent poor weather through a scheme called Vendanges Solidaires.

Team Septime actively participates in Mangeons Local, a movement to support local agriculture and the local economy. They are also members of Bon Pour Climat, reducing the carbon footprint of the hospitality sector. In serving their dishes at the restaurant, front-of-house staff make special efforts to detail the contents of each dish and the origins of all ingredients. 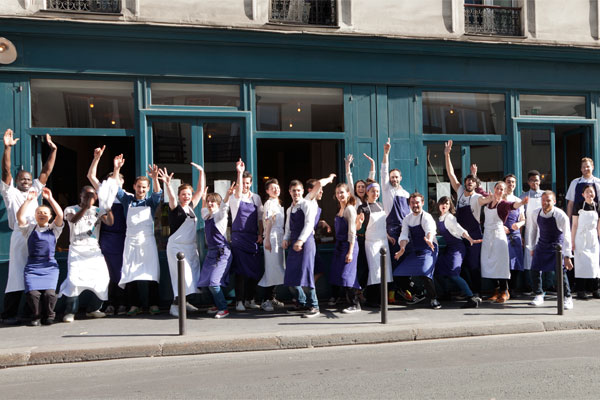 A happy team at Septime

Grébaut and Pourriat are involved in a number of ways to support the local society, including involvement with Farm Africa and an organisation called Ernest, which links restaurants with charities feeding those in need. They offer internships and apprenticeships to locals, and tips are divided equally between all employees, from the maitre d’ and the sous chef to the dish washer.

Septime is fairly unusual in the male-dominated restaurant industry in that it employs 51% women. All staff are paid at least 1.3 times the French minimum wage and with tips, this can rise to twice the minimum wage.

The team at Septime wasn’t satisfied with the recycling and waste management offered by their local authority in Paris so they started working with a private contractor who helps them measure and monitor waste. Ingredients and cut-offs that would usually be thrown away are instead reused in sauces and dishes, and any surplus is used for staff meals. The restaurant is also working on a to-the-gram correct portioning concept.

The good news is that Septime is not a rare case in terms of sustainability – many of the restaurants in the top 100 are increasingly improving their practices and with such huge global visibility they're leading the way for restaurants of all levels around the world.

Congratulations to the other top scorers: in second place, Relae in Copenhagen, Denmark (No.39 on the list); in third place, Brae in Birregurra, Australia (No.44), and in fourth place, Azurmendi in Larrabetzu, Spain (No.38).

Finally, a huge thank you to the Sustainable Restaurant Association for auditing the entries to this increasingly important award.