When Liu Guo Zhu was picked at 16 years old as one of 15 talented kitchen apprentices at the Beijing Hotel, his master – a descendant of the aristocratic Tan family – chose him to continue a centuries-old legacy of secret Chinese cuisine. Guo Zhu reveals the secrets and the history of Tan cuisine, which he now showcases at Golden Flower restaurant at Wynn Macau.

In his 40-year-plus career, Liu Guo Zhu has cooked for the Queen of England, ex US Secretary of State Henry Kissinger and former Chinese leader Deng Xiaoping. At the Beijing Hotel, where he worked in the 1970s and 1980s, he served each of the famous personalities traditional Tan cuisine dishes, rarely tasted by the rest of the world and prepared through secret, labour-intensive techniques that were passed onto him by a direct descendant of the Tan family.

Now, Guo Zhu is executive chef of Chinese culinary operations at Wynn Macau and oversees the Golden Flower restaurant, where he makes Tan cuisine available for the world to taste, while also training new apprentices in the art of this fine cooking style. Considered a fusion of China’s best northern and southern culinary traditions, Tan cuisine dates back to the late Qing dynasty at the end of the 19th century. In this unstable period, high-ranking government official Tan Zongjun realised that his family was struggling to make ends meet.

“In order to earn some money, the Tan family decided to open their house to the public for business,” says Guo Zhu. Tan was a gourmet and often entertained other government officials with great banquets, but opening his family house to strangers – effectively creating a restaurant – was considered a reason for shame for an aristocratic family.

“Tan cuisine still has an unwritten rule: one seat at the table must be reserved for the Tan family host. In the old times, Tan would sit down with the guests and eat only one bite before leaving the table. The family was trying to hide their shame and give the impression that they were not doing business, but merely hosting friends at their house,” says Guo Zhu.

With a focus on light and balanced flavours, Tan cuisine stands out for its conservative use of spices, favouring techniques that bring out the original taste of the ingredients. Over time, Tan cuisine became extremely popular among Beijing’s high society. The mystery that shrouded it – all recipes and techniques were kept secret – led to high prices and long waiting periods for tables, with the Tan house often frequented by famous politicians, artists and actors in the 1930s. 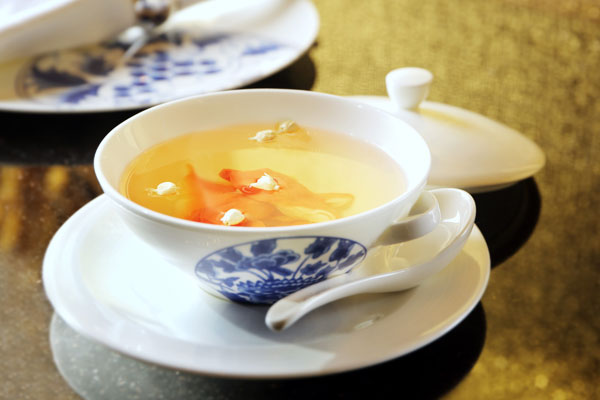 When a top Chinese government leader ate there, he fell in love with the family’s cuisine and decided that it had to be protected within a worthy establishment, to prevent it from getting lost. Thus, the Tan family became chefs at the restaurant in the high-end Beijing Hotel, turning it into the centre of training for Tan cooking.

“I joined the Beijing Hotel Restaurant in 1960 as an apprentice,” says the chef, who was 16 at the time. “Here I first got to know Tan cuisine. The more I studied it, the more I became fascinated with it. Perhaps due to my research and hard work, I became the disciple of the Tan descendant at the hotel. Over time, he taught me the secret recipes and techniques of Tan cuisine.”

Since joining Golden Flower at Wynn Macau in 2009, Guo Zhu has been training new apprentices in this cuisine, not only in China but also in the US. “It is an essential characteristic of the cuisine that it must be passed on from master to disciple, creating a heritage. All chefs trained in Tan cuisine strive to carry on the legacy,” he says.

“One of the most important things is to master heat control, intensity and cooking time for each of the classic ingredients, and especially in the case of dried seafood delicacies,” says Guo Zhu. “You have to understand each ingredient, especially when they come from different regions: dried abalone is different if it comes from Japan, South Africa or the Middle East, and needs to be cooked differently.”

Among the dishes that Guo Zhu now prepares at Golden Flower is the clam and jasmine clear soup. At the heart of the flavourful broth is its preparation: the chef uses old hen, old duck and Jinhua ham, which are broiled for eight hours. It was Tan Zongjun himself who came up with the technique still used to create the crystal-clear soup: by placing a chicken breast paste in the broth and stirring constantly, all impurities are soaked up. Flower-like sea clams and jasmine flowers are added as garnish, enhancing the aroma and resulting in a balanced and colourful presentation.

Other Tan dishes include broiled beef (or mutton) slices served with sesame puffs, and marinated chicken with plum and Chinese yellow wine. Typical ingredients of Tan cuisine are abalone and sea cucumber, and their authentic flavours are brought out with long-cooking techniques such as braising, steaming and poaching.

Another unique characteristic of Tan cuisine is that tea must be served between the appetisers and the main dish in order to cleanse the palate before the delicacies that follow. It is traditions such as this that Guo Zhu preserves at Golden Flower, where you can still get a taste of a 19th-century aristocratic Chinese cuisine that only royals and politicians could experience until 50 years ago.


The Asia’s 50 Best Restaurants 2018 list will be revealed at an awards ceremony in Wynn Palace, Macao on Tuesday 27th March. On Monday 26th March, Asia’s best chefs and bartenders will gather at Wynn Macau to discuss identity in Asian gastronomy at #50BestTalks.